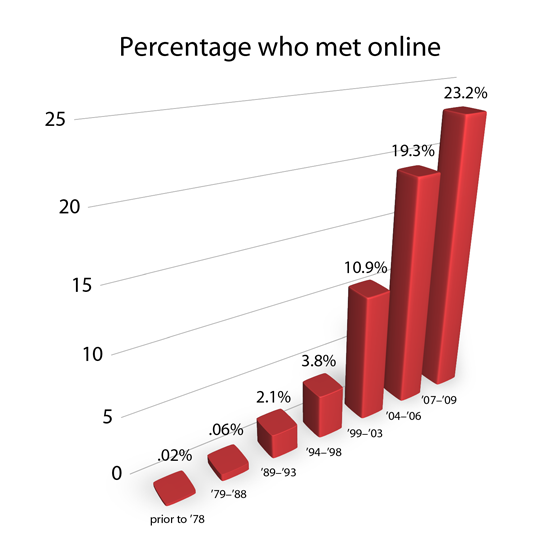 'The graph shows the percentage of Americans who met their partners online as a function of the year they met. The data is adapted from a study by Michael Rosenfeld from Stanford University and Reuben Thomas from City College of New York and is based on a nationally representative sample of 3,009 partnered respondents.'

Online dating has not only shed its stigma, it has surpassed all forms of matchmaking in the United States other than meeting through friends, according to a new analysis of research on the burgeoning relationship industry.

The digital revolution in romance is a boon to lonely-hearters, providing greater and more convenient access to potential partners, reports the team of psychological scientists who prepared the review. But the industry's claims to offering a "science-based" approach with sophisticated algorithm-based matching have not been substantiated by independent researchers and, therefore, "should be given little credence," they conclude. 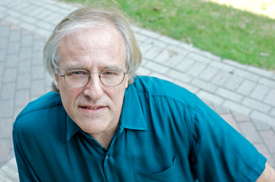 "Online dating is definitely a new and much needed twist on relationships," says Harry Reis, a co-authors of the study and professor of psychology at the University of Rochester.

"Online dating is definitely a new and much needed twist on relationships," says Harry Reis, one of the five co-authors of the study and professor of psychology at the University of Rochester. Behavioral economics has shown that the dating market for singles in Western society is grossly inefficient, especially once individuals exit high school or college, he explains. "The Internet holds great promise for helping adults form healthy and supportive romantic partnerships, and those relationships are one of the best predictors of emotional and physical health," says Reis.

But online love has its pitfalls, Reis cautions. Comparing dozens and sometimes hundreds of possible dates may encourage a "shopping" mentality in which people become judgmental and picky, focusing exclusively on a narrow set of criteria like attractiveness or interests. And corresponding by computer for weeks or months before meeting face-to-face has been shown to create unrealistic expectations, he says.

The 64-page analysis reviews more than 400 psychology studies and public interest surveys, painting a full and fascinating picture of an industry that, according to one industry estimate, attracted 25 million unique users around the world in April 2011 alone. The report was commissioned by the Association for Psychological Science and will be published in the February edition of its journal Psychological Science in the Public Interest.

Other highlights from the analysis include:
Online dating has become the second-most-common way for couples to meet, behind only meeting through friends. According to research by Michael Rosenfeld from Stanford University and Reuben Thomas from City College of New York, in the early 1990s, less than 1 percent of the population met partners through printed personal advertisements or other commercial intermediaries. By 2005, among single adults Americans who were Internet users and currently seeking a romantic partner, 37 percent had dated online. By 2007-2009, 22 percent of heterosexual couples and 61 percent of same-sex couples had found their partners through the Web. Those percentages are likely even larger today, the authors write.

Attitudes have changed radically. Through the 1980s and into the 1990s, a stigma was associated with personal advertisements that initially extended to online dating. But today, "online dating has entered the mainstream, and it is fast shedding any lingering social stigma," the authors write.

Online sites may encourage "soulmate" search. The authors caution that matching sites' emphasis on finding a perfect match, or soulmate, may encourage an unrealistic and destructive approach to relationships. "People with strong beliefs in romantic destiny (sometimes called soulmate beliefs)  that a relationship between two people either is or is not 'meant to be'  are especially likely to exit a romantic relationship when problems arise  and to become vengeful in response to partner aggression when they feel insecure in the relationship," the authors write.

Online dating sites are not "scientific". Despite claims of using a "science-based" approach with sophisticated algorithm-based matching, the authors found "no published, peer-reviewed papers  or Internet postings, for that matter  that explained in sufficient detail  the criteria used by dating sites for matching or for selecting which profiles a user gets to peruse." Instead, research touted by online sites is conducted in-house with study methods and data collection treated as proprietary secrets, and, therefore, not verifiable by outside parties.

Online dating fundamentally changes access to information. "In the words of one online dater: 'Where else can you go in a matter of 20 minutes [and] look at 200 women who are single and want to go on dates?' "

ABC News
Online Dating: Popular and Stigma Is Gone, but Don't Pay for It
(February 6, 2012)