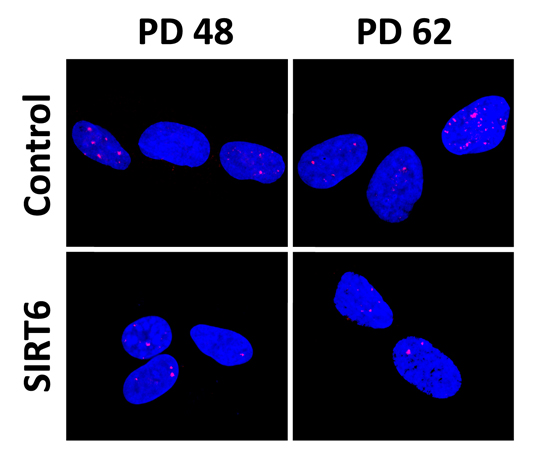 Cells expressing SIRT6 accumulate less DNA damage (areas in red). The cells in the PD 48 column are younger than those in the PD 62 column.

Scientists have long wondered why cells lose their ability to repair themselves as they age. New research by scientists at the University of Rochester has uncovered two intriguing clues.

The work by biologists Andrei Seluanov, Vera Gorbunova, Zhiyong Mao, Xiao Tian, Michael Van Meter, and Zhonghe Ke, has been published in the Proceedings of the National Academy of Sciences.

DNA strands in human cells routinely break and repair themselves, Seluanov and Gorbunova explained, but as cells age, the system for repair becomes less efficient and flaws in the process lead to a decline in the functionality of tissue and an increase in the incidence of tumors. Their team wanted to determine why this occurs, and establish whether the process could be slowed, or even reversed.

Seluanov and his colleagues found that the decline in a cell's ability to repair DNA during aging coincided with a global reduction in the levels of proteins involved in the repair process. Seluanov's group tried to reverse the age-related decline in DNA repair efficiency by restoring the proteins to their original levels and found only one protein, SIRT6, did the trick.

Gorbunova said the results build on a paper by Haim Cohen, a staff scientist investigating aging at Bar-Ilan University in Israel, and others published in the journal Nature this summer. "That work showed that overexpressing the SIRT6 protein extended the lifespans of mice," said Gorbunova, "Our research looked at DNA repair and found a reason for the increased longevity, and that is SIRT6's role in promoting more efficient DNA repair."

The next step for Seluanov and his team is to study the factors that regulate SIRT6, in an effort to learn more about the early stages of the DNA repair process. Seluanov said that multiple groups are trying to develop drugs that activate SIRT6, and he hopes that this research will one day lead to therapies that help extend a person's lifespan and treat cancer.

Seluanov and Gorbunova pointed out that previous research from their groups had established that SIRT6 plays a critical role in repairing the most dangerous type of DNA damage: double-strand breaks. DNA is a two-stranded molecule, and breaks can occur to one strand of the molecule or to both. In the case of single-strand breaks, the unbroken strand guides the repair process and the DNA molecule is typically restored to its original state. However, double-strand breaks, in which both strands are severed, are particularly hazardous because they are more difficult to repair and can lead to a rearrangement of the cell's genetic material, Seluanov said.

Cells have evolved two major pathways to repair double-strand breaks: a high fidelity processhomologous recombination (HR)and a quicker, but more error-prone processnon-homologous end joining (NHEJ). Seluanov's current study shows that the age-related decline in HR is particularly precipitous, with old cells being 38-times less efficient at the process than their younger counterparts. Gorbunova speculated that older cells may be forced to overly rely on the less accurate NHEJ, which also becomes less efficient during aging, likely contributing to the loss of tissue functionality and the increase in tumor incidence that characterize aging.