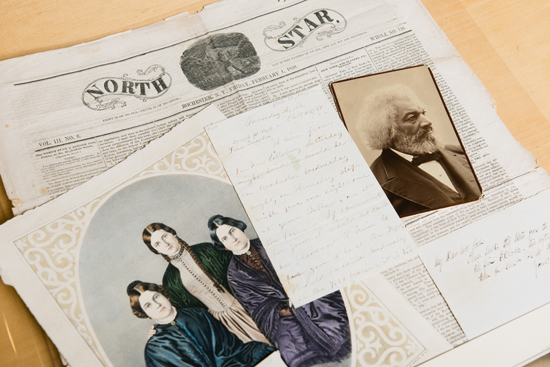 On Sept. 13, the University of Rochester will launch an online archive of manuscripts from the Post family, Rochesterians who were near the center of many of the national movements of the 1800s that helped define their city as one of American's most progressive.

"Rochester was an epicenter of progressive causes," says Michael Jarvis, an associate professor of history. As activists during this heady period of reform, the Posts knew well and corresponded with a surprising number of national leaders, from Frederick Douglass and Susan B. Anthony to Sojourner Truth, Harriet Brent Jacobs, and William Cooper Nell.

"They were the Kevin Bacon of the 19th century," says Jarvis, referring to the famously well-connected Hollywood actor so useful in playing the "six degrees of separation" game of association.

In the early 1840's the Posts became deeply involved in the anti-slavery movement, using their house at 36 Sophia St., now N. Plymouth Ave., as a very active station on the Underground Railroad, says Lori Birrell, manuscript librarian in Rare Books and Special Collection who has served as co-project manager along with Melissa Mead, director of the Digital Projects Research Center.

"They supported Douglass's newspaper, the North Star, Amy Post attended the first woman's rights convention in Seneca Falls in 1848 and introduced fellow Rochesterian Susan B. Anthony to the woman's rights movement," says Birrell. "The Posts also participated in the controversial Spiritualist movement in the late 1840s. Begun by the Fox sisters here in Rochester, followers believed that through mediums (Isaac Post eventually believed himself to be a medium) they could communicate with the dead."

To celebrate the launch of the online archive, scholars and students who have worked with the collection will discuss its significance to local and national history. The event begins at 5 p.m. on Sept. 13 in the Hawkins-Carlson room of Rush Rhees Library and is free and open to the public.

The papers cover a full century, from 1817 to 1918, with the majority of the material falling during the nearly 50-year span from 1823 to 1872. They include extensive resources related to the Post's activities in the abolitionist, Spiritualist, and women's rights movements. Other topics for which there is significant material are: agriculture, the anti-tobacco movement, childbirth, Chinese immigrants, the Civil War, domestic servants, education, the Friends of Human Progress, freed slaves, Indians, medicine, Quakers, the Reconstruction Era, slavery, and the temperance movement.

The Post papers contain 2,089 letters, manuscripts, newspapers, and other material, and the initial online launch will feature a selection of more than 200 letters. Each letter has been scanned, transcribed, and annotated, a project made possible through the generosity of Randall B. Whitestone '83 and Lisa T. Whitestone. Eventually the library plans to digitize the entire collection.

To date, students have performed all of the painstaking preparation of the transcriptions. "I had each student select a letter, transcribe it, and do research to explain who is being discussedand what events," says Jarvis, who uses the archive as a tool for training graduate students about primary sources. "The students have provided a reader's guide to make the content of the letter more understandable and useful."

Margarita Simon Guillory, an assistant professor of religion, also incorporates the collection into her class on Spiritualism. Reading and transcribing these private letters, she says, "humanized" historical figures for the undergraduates in her class. "It was amazing for them," she says. For example, letters from the Fox sisters, reveal how the famed and widely traveled Spiritualist mediums, were also teenaged girls and sometime lonely. "[A]h how I do wish that you were here," wrote Catherine Fox to Amy Post in this letter from 1850. "[Y]ou know we always loved you."

But the collection's importance extends far beyond the classroom. Guillory uses the archive in her own research on Spiritualism and scholars around the world will find these papers a rich source of social history, she says.

For example, Amy Post was one of the early influences on Susan B. Anthony, encouraging and supporting her in entering the struggle for women's rights. An organizer of both the Seneca Falls and Rochester conventions in 1848, Post was also an editor of the convention Proceedings published in 1870. In this letter from 1861, Anthony urges Post to gather the names of prominent businessmen, lawyers, and judges for a petition, tells of her visit to their mutual friend and women's rights activists Elizabeth Cady Stanton, and updates Post on gatherings in Auburn, Boston, and Albany.

Many of the letters are from leaders of the abolitionist movement. For example, Sojourner Truth, an abolitionist and former slave, dictated in this letter sent to Amy Post her experience of being assaulted in Washington, D.C. for trying to ride on a public train. Harriet Jacobs, a former slave and author the first slave narrative to detail the sexual abuse of female slaves, discussed the difficulty of writing about such a sensitive topic in this letter to Post. "[T]here are somethings [sic] that I might have made plainer I know- woman can whisper- her cruel wrongs into the ear of a very dear friend- much easier than she can record them for the world to read."