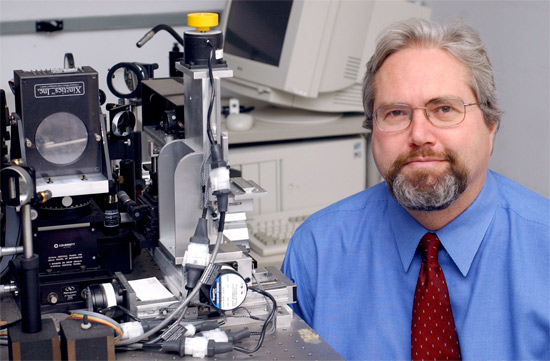 David Williams, a faculty member of the University of Rochester's Institute of Optics, director of its Center for Visual Science, and dean for research in Arts, Science, and Engineering, will receive the António Champalimaud Vision Award at a ceremony today in Lisbon, Portugal. The ceremony, chaired by the president of Portugal, will recognize Williams' work on adaptive optics technologies as a "major breakthrough in the understanding and/or the preservation of vision." Williams is widely regarded as one of the world's leading experts on human vision.

In awarding the prize, the jury stated that Williams and his research group have "revitalized the field of physiological optics, producing year after year truly beautiful, technically brilliant and groundbreaking work."

The prize is shared with the developers of optical coherence tomography (OCT), another method of imaging the retina that has improved the diagnosis and clinical management of retinal disease. Williams said he was delighted to share the award as "together these two technologies make it possible for us to image the retina with unsurpassed resolution and move us further down the path to understanding of retinal disease." Williams, the William G. Allyn Chair of Medical Optics, called the discoveries in adaptive optics "the work of many graduate students, postdoctoral fellows, and collaborators over two decades. It is great for our whole community that the achievements and potential of adaptive optics for vision is showcased with this award," he said.

The Champalimaud Award is given in even numbered years and awards one million euros for contributions to vision research, by far the largest amount of any award in the fields of vision science and ophthalmology. Williams will be taking half of the prize, about $630,000 toward future research.

Adaptive optics was first developed by astronomers so that telescopes could see more clearly through the Earth's atmosphere. The technologies that Williams and his group developed apply these techniques to the eye and make it possible to image individual retinal cells, down to individual cone photoreceptors in the living human retina, by looking through the pupil. The techniques Williams' group developed can not only modify the light leaving the eye to obtain better pictures of the retina, they can also modify the light going into the eye to obtain better vision. This can improve vision in patients with contact lenses, intraocular lenses, and laser refractive surgery. For example, the methods Williams' group developed are used in many of the LASIK procedures conducted worldwide today.

The jury added that the discoveries of Williams and his colleagues have "demonstrated the potential of optical methods, for both the investigation and the improvement of normal and pathological visual function. They have set the stage for current approaches to vision correction and have opened up new possibilities for imaging retinal structures in the living eye."

David Williams' Lab at the Center for Visual Science