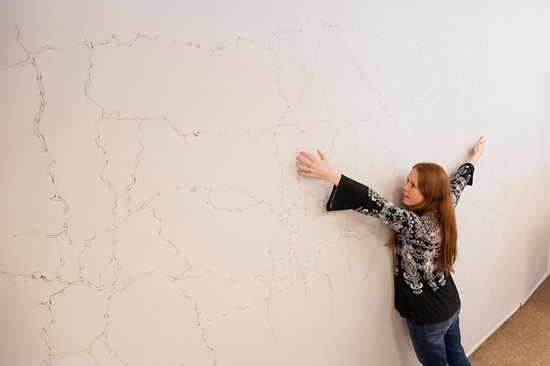 An 18-foot-long rhinestone covered replica of a U.S. Predator drone will be the center of new multimedia art exhibit opening on Friday, March 1, at the Hampden Gallery at the University of Massachusetts Amherst. The exhibit, titled Home Drone, challenges viewers to imagine their reaction if thousands of deadly drones had struck in the U.S.specifically Massachusettsrather than in Pakistan, Yemen, and Afghanistan.


The exhibition was created by Heather Layton, an internationally known social intervention artist and senior lecturer at the University of Rochester, and collaborator Brian Bailey, a professor of adolescence education with a focus on social justice at Nazareth College, also in Rochester, N.Y.

Layton and Bailey, who were named "citizen diplomats" by the U.S. Department of State in 2012, have previously created art installations designed to challenge assumptions about urban gun violence, fears of other cultures, and the prevalence of consumer culture and self-absorption.

"Starting in 2004, the United States government has sent fleets of unmanned aerial vehicles, also known as drones, over northern Pakistan to deploy 'Hellfire missiles' at suspected terrorists," said Layton. "But if we can send missiles through the skies of an independent country with the explanation that we are only killing those who are planning to fight against us, what should prevent another country from sending unmanned aerial vehicles into United States airspace to kill those who might be planning to fight against them? This is what Home Drone explores."

In addition to increasing social awareness about this controversial issue, Layton hopes the exhibit will help promote a cultural understanding between the U.S. and Pakistan, and help cultivate peaceful relationships between individuals, regardless of religion, gender, socioeconomic status, age, nationality, and culture.

Guided by additional information from the 2012 report "Living Under Drones" by law professors at Stanford and New York University, Layton and Bailey hope to shed light on people affected by the attacks. According to Bailey, "The report shows through personal interviews both the devastation caused by drones and the fear of those who live under them experience, knowing an attack can happen at any time."

Layton and Bailey's exhibit also includes videos of presidential candidates Barack Obama and Mitt Romney debating drone strikes, videos of civilians protesting the strikes, and a wall-sized map of the drone attack sites superimposed over a drawing of Massachusetts, beginning with the site of the Boston Tea Party in 1773.

"After visiting Pakistan this topic became particularly important to us as we started to realize these drones are attacking people we now consider our friends," said Layton. Last year, she and Bailey traveled to the University of Karachi in Pakistan to deliver a keynote address at a conference, Social Intervention 2012: A Better Tomorrow for the Coming Generation. While there, they also helped launch a youth film festival and installed an interactive art exhibition.

Home Drone will be on exhibit at the Hampden Gallery atUMass Amherst from March 1 through Tuesday, March 26, with the exception of March 17-24. The Gallery is open from 1 to 6 p.m. Tuesday through Friday, and on Sundays from 2 to 5 p.m.

The artists will be on the UMass Amherst campus from the weekend of Feb. 28 through March 1 in preparation for the exhibit. Class and studio visits may be arranged by calling John Simpson at 413.545.3394.

The Valley Advocate
Art in Paradise: Death from Above
(March 12, 2013)