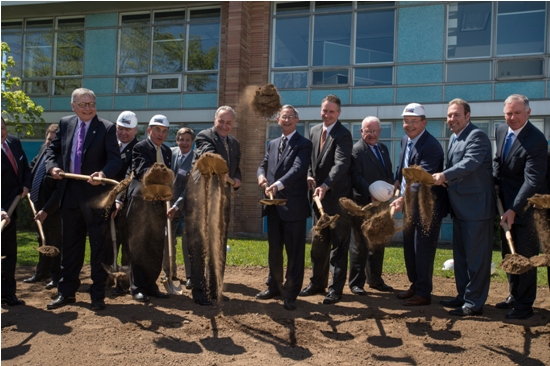 College Town is a comprehensive plan to redevelop 14 acres of University-owned property with 500,000 square feet of retail and dining space, hotel and conference facilities, parking, and housing for the Mt. Hope and University communities and area visitors. The $100 million project at the intersection of Mt. Hope and Elmwood avenues has been a vision for local community partners since 2008 and promises to provide economic benefits to the region, while building a welcoming and cohesive University-neighborhood community.

"This is a historic day for the City of Rochester," said University President Joel Seligman. "College Town is an excellent model of how public-private partnerships should work. We have enjoyed and been grateful for the incredible support we have received at every level of government, from stakeholders throughout the University community, and pivotally, from our neighbors."

The commencement of College Town's construction is the culmination of significant local, state, and federal support, and years of planning and coordination among officials from the University, the City of Rochester, and local organizations including the Mount Hope Avenue Task Force, the Mt. Hope Business Association, the Southeast Area Coalition, and Mt. Hope Cemetery.

In November 2012, a $20 million Housing and Urban Development (HUD) Section 108 loan to the City of Rochester was announced for the project, made possible through the leadership of Sen. Charles Schumer and HUD Secretary Shaun Donovan, as well as Rochester Mayor Thomas Richards and Rochester City Council.

In December 2012, the College Town project was awarded $4 million through Governor Andrew M. Cuomo's Regional Council Initiative, as part of a total $96.2 million award to the Finger Lakes Regional Economic Development Council representing the state's investment in projects aimed at creating 50,000 new jobs in the region over the next five years. College Town will spur economic development through the creation of jobs; revenue through sales income and property taxes; and the conversion of an unused space into a destination that will keep residents and goods and services within city limits.

In February 2013, COMIDA, the County of Monroe Industrial Development Agency, gave its support to the project through $13.5 million in tax incentives, based on College Town's expected economic benefits and job creation potential for the region, including:

Additionally, $800,000 in federal funding was secured by Rep. Louise Slaughter and supported by senators Schumer and Kirsten Gillibrand for the Rochester Genesee Regional Transportation Authority to improve mass transit for College Town.

College Town is slated to be completed by late fall 2014 and is being developed by Fairmount Properties and Gilbane Development, forming College Town LLC. The project is designed to promote walkability with wide footpaths and green space; $17 million in public infrastructure improvements are in progress by the City of Rochester at the Mt. Hope and Elmwood intersection, including landscaped medians, new sidewalks, broadened roadways, reduced curb cuts, new signals, signage, and traffic controls.

Upon its 2014 completion, College Town will feature:

Many government, community, and University partners have joined together to make College Town a reality. Those participating in the groundbreaking included: