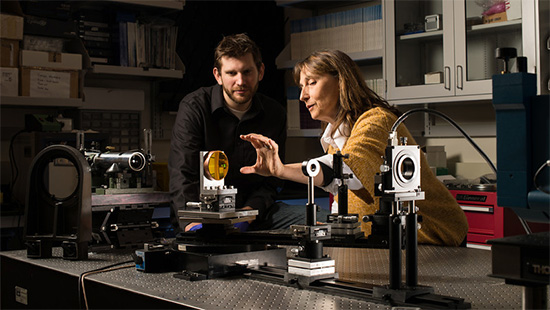 Jannick Roland works with a graduate student on a freeform lens experiment.
(photo by J. Adam Fenster, University of Rochester)

A new center led by the University of Rochester will receive over $4 million in combined federal, industry and academic funding to advance the emerging area of freeform optics.

Freeform optics could transform 21st century optical science. It could allow for a wider range of shapes for lenses and mirrors, which until recently had been mostly limited to spherical shapes, and they could be targeted to their use. Although the production of freeform surfaces became possible just a few years ago, researchers have already identified broad applications, including mobile displays, LED lighting, remote sensing devices and astronomical instrumentation.

"Freeform optics research is applied research and is best done in collaboration with industry  the new center will make this possible," said Jannick Rolland, director of the center and the Brian J. Thompson Professor of Optical Engineering at Rochester. Rolland also stressed the role that the center will play in educating optics graduate students. "Innovation in this area will require industry to have well-trained employees who can understand the fundamental research and also how to apply it."

The Rochester team pioneered the theoretical framework to describe this new type of optics by understanding how these surfaces guide light in not one dimension, but three dimensions. This is an essential step in guiding the design of any freeform system, which together with fabrication and metrology will constitute the focus of the center.

The center will draw upon expertise in a wide range of areas, including mathematics, optics, materials science and instrument design to support what is considered pre-competitive research  applied research that is still not product-ready, but is an essential step to any future technology in this field.

"Jannick is ideally suited to lead the new center for freeform optics, which brings university and industrial researchers together to ultimately advance manufacturing," said Robert Clark, senior vice president for research and dean of the Hajim School of Engineering and Applied Sciences. "The Institute of Optics at the University of Rochester has served a pioneering role in optics for nearly a century, and Jannick builds upon the University's strengths and that of the local region in advancing our mission to serve as an international leader in this ever growing field."

The Center for Freeform Optics (CeFO) brings together two universities, University of Rochester and University of North Carolina at Charlotte (UNCC), with industry partners. The goals of the center include advancing freeform optics research as a basis for innovation, demonstrating the innovation for state-of-the-art optical systems and educating the next generation workforce, which is critical to industry.

The formation of the center was seeded in a collaboration with the Optical Society of America (OSA) through a first incubator meeting in freeform optics held in Washington D.C., Nov. 2011, that gathered over 50 scientists and engineers from academia, industry and government laboratories. Many more will gather again at the upcoming OSA Topical Meeting on Freeform Optics starting on Nov. 4, 2013 in Tucson, Ariz.

The eight faculty members from Rochester who participated in the formation of the center focus on the design and metrology of freeform optics. Graduate students will be an integral part of the center and Rolland will start working on creating opportunities for the involvement of undergraduate students in this collaborative research venture. She plans to create synergy with the R.E. Hopkins Center, which she also heads and which is dedicated to teaching undergraduate students to design and build optical systems.

The Rochester team consists of Rolland, Associate Center Director John Lambropoulos, Miguel Alonso and Jim Fienup from the Institute of Optics, Stephen Burns and Jon Ellis from Mechanical Engineering, Stephen Jacobs from the Laboratory for Laser Energetics, and Kevin Thompson from Synopsys, Inc. and visiting scientist at the University, who was recently awarded the Conrady medal by the SPIE, the international society for optics and photonics, for work on the aberration theory of rotationally non-symmetric systems, which serves today as the foundation for the aberration theory of freeform optics recently discovered at the University of Rochester.

The six-member UNCC team will focus on fabrication and metrology.

"I am delighted that Rochester will be home to the Center for Freeform Optics," said U.S. Congresswoman Louise M. Slaughter. "Our area has the rich history and unique academic and industry resources that truly define us as a world leader in optics, and the establishment of this center is just the next step in our efforts to advance the optics industry in Rochester."

"This is exactly the type of industry-university partnership we envisioned when we decided to provide support to this program," said Ed Reinfurt, director of Empire State Development's Division of Science, Technology & Innovation. "We're looking forward to the exciting things that can  and will  happen as a result of bringing together the innovative minds of professors like Jannick Rolland to collaborate with the industry's best in the business."

Rolland was funded by Empire State Development Division of Science, Technology & Innovation under its Faculty Development Award program from 2009 to 2013.