Polymersthe essential component of plasticsare found in countless commercial, medical, and industrial products. Polymers that are porous are called foam polymers and are especially useful because they combine light weight with rigid mechanical properties. Now a researcher at the University of Rochester has developed a process to grow highly customizable coatings of foam-like polymers.

The process, developed by Mitchell Anthamatten, an associate professor of chemical engineering at the University's Hajim School of Engineering and Applied Sciences, involves growing foam polymers directly from gases. His findings were published this week in the journal Macromolecular Rapid Communications. 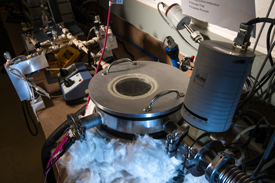 An initiated chemical vapor deposition (ICVD) system
is used to convert a mixture of gases into foam polymer.

"With this process we can grow polymer coatings in which the density and pore structure varies in space," said Anthamatten. "My hope is that the research leads to applications in a wide variety of fields, including medical, manufacturing, and high-tech research."

Anthamatten, working closely with graduate student Ran Tao, developed a system in which a mixture of gases is pumped into a low pressure reactor containing a cold surface to encourage condensation. One of the condensed liquids actually forms the polymer material (think of the solid part of a sponge), while the other one temporarily occupies the spaces that become the pores in the foam material (think of the hollow part of a sponge). But the problem is that the liquids in the film don't mix wellvery much like water and oil. What's required is to quickly solidify the polymer film, just as the two liquids begin to separate from one another. By controlling the solidification rate, they could control the size and distribution of the pores; the faster the coating is solidified, the smaller the pores become. 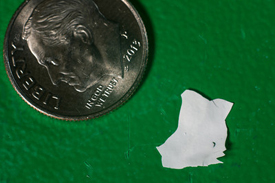 Foam polymer coatings with varying density and
pore structures are made in the lab of chemical
engineer Mitchell Anthamatten.

Anthamatten and Tao found the answer by adjusting the rate at which the gases were fed into the system, changing the temperature of the cold surface in the reactor, and using a chemical agent that helps solidify the coating. By adjusting all those factors, they were able to coat foam polymers with different densities, thicknesses, shapes, and hole-sizes.

"This process is highly customizable, meaning that we can make adjustments along the way, shaping the material's pore structure and density as it is grown," said Anthamatten. "As a result, it will be easier to put foam polymers in hard-to-get-at places, or even on curved surfaces."

Anthamatten has worked on the project since 2008 and has received support from the National Science Foundation.

Foam polymers are used in a variety of ways, including the delivery of drugs in the body, as a framework for body tissues and implants, and as layers in laser targets for fusion research.