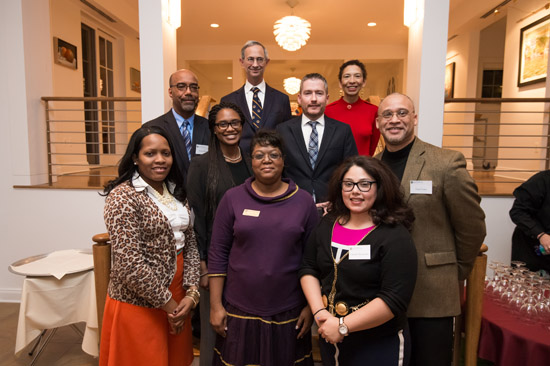 A researcher and tireless advocate of LGBT rights along with an office that serves as a "home away from home" for minority students will be publicly recognized as the University of Rochester's 2014 Presidential Diversity Award recipients on Friday, Jan. 24, during the University's annual Martin Luther King Jr. Commemorative Address.

John P. Cullen, a research associate professor in the Department of Surgery at the Medical Center, and the Office of Minority Student Affairs were chosen for their extraordinary commitment to helping create an inclusive, equitable, and supportive campus, said Vivian Lewis, deputy to the president and vice provost for Faculty Development and Diversity and chair of the award's selection committee.

"Diversity is a fundamental value of our university," said University President Joel Seligman. "In recognizing John Cullen and the OMSA team, we celebrate and affirm our commitment to that value and hope to inspire others to emulate their good work."

In his time at Rochester, John P. Cullen has advocated for LGBT faculty, staff, students, and patients. His efforts have resulted in the creation of an affinity group, changes to the University's non-discrimination policy, and workshops and conferences that address LGBT healthcare and disparities in the delivery of medical services.

In 2006, Cullen helped pilot the Pride Alliance at the University of Rochester (PAUR), which serves as an employee resource group dedicated to creating and sustaining a work environment in which all individuals are valued regardless of sexual orientation or gender identity or expression. "John has been an intellectual and organizational force for change," wrote Paul Burgett, vice president and senior advisor to the president, who serves as PAUR's executive champion, in a letter nominating Cullen for the award.

Burgett and Cullen worked closely together to implement changes to the University's anti-discrimination policy. For nearly a year, Cullen benchmarked data from peer institutions and met with University administrators to develop the proposal to add gender identity and gender expression to the policy. Additionally, he worked with University leadership and benefits staff to expand coverage to domestic partners in policies concerning Family Medical Leave and Death in the Immediate Family. Sharon Glezen, medical chief at University Health Service, says Cullen's work is not finished, noting his efforts to have gender transition-related coverage included in the University's health benefits plans for employees and students by 2015.

In a letter nominating Cullen for the diversity award, Glezen wrote at length about Cullen's advocacy for a group of URMC patients who are often marginalized and without access to culturally competent medical care. He served as a lead organizer of a conference that helped train health care providers in the Rochester community on the topic of LGBT healthcare and has worked to have equal visitation rights granted to LGBT patients and their families.

Glezen lauded Cullen's "work ethic, his attention to detail, his ability to listen carefully to a variety of viewpoints, his good humor, his leadership skills, and most importantly, his commitment to human rights, social justice, and diversity." Cullen has provided a "voice for those who often are not empowered to speak on their own behalf due to stigma, shame, or fear of reprisal," she wrote.

For Makia Green '14, the Office of Minority Student Affairs "feels more like a family than a department." To Yasmeni Sandridge '16, it is where she goes whenever she needs advice. Alexandra Poindexter '15, described OMSA as a place where fearless young leaders are molded.

For 45 years, OMSA programs like the Higher Education Opportunity and Early Connection Opportunity have provided students with academic advising, personal counseling, and financial assistance. "OMSA has quietly and consistently championed the cause of academic achievement and retention of underrepresented students," wrote Lydia Crews, assistant director of Wilson Commons Student Activities, in a letter nominating OMSA for the award. These programs also offer students the chance to engage with OMSA staff members who for many undergrads become powerful sources of support and encouragement during their four years at Rochester.

Additionally, OMSA supports the University's diversity efforts through events and initiatives including the annual Martin Luther King Commemorative Address, the Academic Achievement Reception, the Emerging Leaders Program, and publications like the OMSA Chronicle.

At the annual Senior Dinner, which Crews describes as a "five handkerchief experience" where the "beauty of OMSA's diverse student population is on full view," students celebrate their academic success and thank their family for four years of support. During the dinner, which has been a tradition for 40 years, "student after student will stand up to thank the OMSA staff for their assistance over the years," wrote Matthew Burns, dean of students. "Some of them assert that they 'never would have made it' without those staff members."