The Galápagos Islands are home to some of the most active volcanoes in the world, with more than 50 eruptions in the last 200 years. Yet until recently, scientists knew far more about the history of finches, tortoises, and iguanas than of the volcanoes on which these unusual fauna had evolved.

Now research out of the University of Rochester is providing a better picture of the subterranean plumbing system that feeds the Galápagos volcanoes, as well as a major difference with another Pacific Island chainthe Hawaiian Islands. The findings have been published in the Journal of Geophysical Research: Solid Earth.

"With a better understanding of what's beneath the volcanoes, we'll now be able to more accurately measure underground activity," said Cynthia Ebinger, a professor of earth and environmental sciences. "That should help us better anticipate earthquakes and eruptions, and mitigate the hazards associated with them." 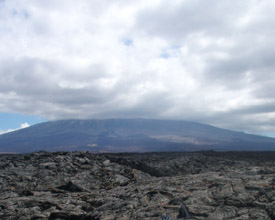 The Sierra Negra volcano on Isabela Island in the
Galápagos Archipelago. (Photo by Cynthia Ebinger/
University of Rochester.)

Ebinger's team, which included Mario Ruiz from the Instituto Geofisico Escuela Politecnica Nacional in Quito, Ecuador, buried 15 seismometers around Sierra Negra, the largest and most active volcano in the Galápagos. The equipment was used to measure the velocity and direction of different sound waves generated by earthquakes as they traveled under Sierra Negra. Since the behavior of the waves varies according to the temperature and types of material they're passing through, the data collected allowed the researchers to construct a 3D image of the plumbing system beneath the volcano, using a technique similar to a CAT-scan.

Five kilometers down is the beginning of a large magma chamber lying partially within old oceanic crust that had been buried by more than 8 km of eruptive rock layers. And the oceanic crust has what appears to be a thick underplating of rock formed when magma that was working its way toward the surface became trapped under the crust and cooledvery much like the processes that occur under the Hawaiian Islands. 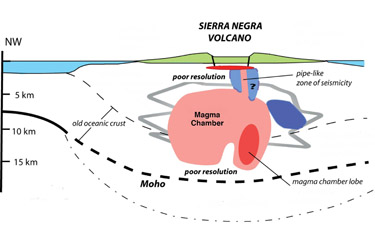 The plumbing system beneath the Sierra Negra volcano.
(Graphic by Cynthia Ebinger/University of Rochester.)

The researchers found that the Galápagos had something else in common with the Hawaiian Islands. Their data suggest the presence of a large chamber filled with crystal-mush magmacooled magma that includes crystallized minerals.

The Galápagos Islands formed from a hotspot of magma located in an oceanic platecalled Nazcaabout 600 miles west of Ecuador, in a process very similar to how the Hawaiian Islands were created. Magma rising from the hotspot eventually hardened into an island. Then, as the Nazca plate inched its way westward, new islands formed in the same manner, resulting in the present-day Galápagos Archipelago.

While there are several similarities between the two island chains, Ebinger uncovered a major difference. The older volcanos in the Hawaiian Islands are dormant, because they've moved away from the hotspot that provided the source of magma. In the Galápagos, the volcanoes are connected to the same plumbing system. By studying satellite views of the volcanoes, Ebinger and colleagues noticed that, as the magma would sink in one, it would rise in a different volcanoindicating that that some of the youngest volcanoes had magma connections, even if those connections were temporary.

"Not only do we have a better understanding of the physical properties of Sierra Negra," said Ebinger, "we have increased out knowledge of island volcano systems, in general."