EVENT: Andrew Young to Speak at the University of Rochester

Andrew Young, business leader and former U.S. Ambassador to the United Nations, will deliver the Martin Luther King Jr. Commemorative Address at the University of Rochester. Young was a top aide to Dr. King during the inception of America's civil rights movement. His talk, at 6:30 p.m., Monday, Jan. 21, in Strong Auditorium on the River Campus, is free and open to the public.

Young's vision of advancing economic development with private sector involvement was honed during leadership positions in both public service and private industry during his nearly 50-year career. In 1981, Young was elected mayor of Atlanta and was re-elected in 1985. He was elected to the U.S. Congress and served from 1973 to 1977. President Jimmy Carter appointed Young to serve as U.S. Ambassador to the United Nations. He was the first African American to hold the post. In 1994, President Bill Clinton appointed him chairman of the Southern Africa Enterprise Development Fund, a $100 million privately managed fund to provide equity to businesses in 11 countries.

Born in 1932 in New Orleans, Young originally planned to follow his father's career of dentistry. His mother, Daisy Fuller Young, was a school teacher. At a young age, Young experienced the segregated and over-crowded public schools of his neighborhood. A religious calling led him to his involvement with the Congregational Christian Church (now United Church of Christ) upon graduation from Howard University in 1951. After receiving his divinity degree from Hartford Seminary in Hartford, Conn. in 1955, he was appointed pastor of a church in Marion, Al., where he also became interested in the concept of nonviolent resistance through the writings of Mohandas K. Gandhi.

During this time, Young also became involved in drives to register black voters and joined the Southern Christian Leadership Conference (SCLC), an American civil rights organization that was closely associated with its first president, Martin Luther King Jr. Young was jailed for his participation in the civil rights demonstrations in both Selma, Al. and St. Augustine, Fla., and played a key role as a mediator between black and white communities in Birmingham, Al. in 1964. That same year, Young was named executive director of the SCLC, becoming one of King's principal lieutenants. Young was with King in Memphis, Tenn. when King was assassinated in 1968.

Today, Young is the co-founding principal and chairman of GoodWorks International, a consulting firm that focuses on energizing the private sector to advance economic development in Africa and the Caribbean by putting executives in contact with leaders and key influences in emerging markets. He was recently honored with the title of national spokesperson for Operation HOPE, a national nonprofit organization that seeks to bring economic self-sufficiency and a sustained spirit of revitalization to America's inner city communities and he is the namesake of the Andrew Young School of Policy Studies at Georgia State University in Atlanta.

"The University of Rochester's Martin Luther King Jr. Commemorative Address has traditionally been given by civil rights leaders who have spoken personally about Dr. King's legacy, and who have inspired us with their work toward creating an America of which Dr. King would be proud," said Beth Olivares, assistant dean for Diversity Initiatives and co-chair of the College Diversity Roundtable. "Throughout his life and career, Ambassador Young has fought for the spirit of compassion and creation of equal opportunity that Dr. King embodied."

Young has written two books, A Way Out of No Way (Thomas Nelson Publishing) and An Easy Burden (Harper Collins). His awards include the Presidential Medal of Freedom, Légion d'Honneur, and more than 45 honorary degrees from such universities as Yale, Notre Dame, Emory and the University of Georgia. In his speeches, Young focuses on the future of doing business domestically and on a global scale, with particular emphasis on opportunities in previously overlooked markets.

The annual Martin Luther King Jr. Commemorative Address is sponsored by the College Diversity Roundtable and the Office of the President.

Democrat and Chronicle
Andrew Young to deliver King Day address at UR
(November 29, 2007) 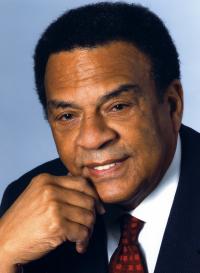