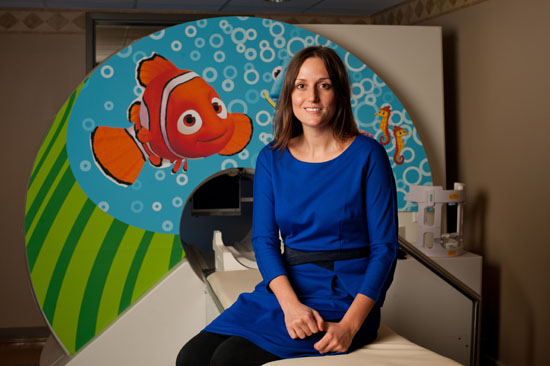 Jessica Cantlon in front of the decommissioned fMRI machine used to get children comfortable with brain scanners. Photo by J. Adam Fenster / University of Rochester

Jessica Cantlon, a cognitive scientist at the University of Rochester who studies the brain's ability to grasp numbers and other mathematical concepts, has been selected as a 2013 Sloan Research Fellow.

Awarded annually by the Alfred P. Sloan Foundation since 1955, the fellowships honor the "best of the best among young scientists," says Paul L. Joskow, president of the Sloan Foundation. Each fellowship carries a $50,000, two-year award to help support the recipient's research.

An assistant professor of brain and cognitive sciences, Cantlon studies the human brain's ability to estimate, count, add, subtract, and eventually handle complex symbolic mathematics. She explores both the development of mathematical aptitude as children mature and the evolutionary origins of such cognitive skills in other primates. She comes at these questions using a wealth of approaches, from neuroimaging and developmental psychology to non-human primate research.

"Jessica has been an incredibly productive scientist," wrote Gregory DeAngelis, professor and chair of brain and cognitive sciences in his letter of support for the Sloan fellowship. In addition her publication record, she was the first researcher able to conduct fMRI studies of very young children, which requires perfect stillness within the magnet.

"She is fearless as a scientist," DeAngelis wrote. "She is driven by major important questions in the field, and she will conquer whatever technical obstacles are in the way of addressing those questions."

For Cantlon, the search is ultimately about finding "the building blocks of cognition." Do children learn about quantities and counting from their environment, or are they born with a basic ability to grasp these concepts? In other words, are mathematical constructs like "equal" or "more than" built into our primitive brain, "like preloaded software?" asks Cantlon. 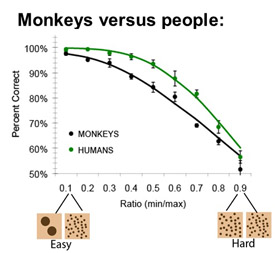 The graph shows the marked similarity between humans and monkeys when each species attempts to quickly choose the smaller of two sets of dots. Such similarity, says Cantlon, provides evidence that the brain likely has a "primitive" or fundamental concept of number that is common across species.

To resolve these questions, Cantlon has compared numerical understanding in humans and other primates. In one study, adult humans and monkeys were both asked to quickly choose, without counting, the smaller of two sets of dots. Her data shows that the pattern for making such rough and rapid estimates is remarkably similar for monkeys and humans. Even though humans are able to perform very precise calculations when using symbolic numbers, our ability to visually discern quantities is essentially the same as monkeys. Such similarity, says Cantlon, provides evidence that the brain likely has a "primitive" or fundamental concept of number.

Cantlon is also peering into the activity patterns of the brain during number exercises to determine where and how such thinking occurs. Using fMRI scans, her research has shown that the region of the brain that is active when preschoolers make simple estimations and number judgments is the same area that adults are thought to use when handling higher math. In other words, formal math ability appears to build on pre-existing numerical awareness.

Currently, Cantlon is extending her studies to non-human primates. She is in the early stages of conducting fMRI studies of number representations on monkeysanother first. By comparing these brain scans with scans from children, she hopes to identify neural mechanisms that are common across species and stages of development.

Such research, wrote DeAngelis, "will tell us some profoundly interesting things about the origins and foundations of our human mathematical capabilities, and perhaps the neural origins of logical reasoning in general."

Cantlon completed her doctorate in cognitive science at Duke University and was a postdoctoral fellow at Carnegie Mellon University, before joining the University of Rochester in 2009. She was named a James P. Wilmot Assistant Professor in 2012 and a James S. McDonnell Scholar in 2011.