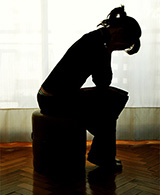 If you think giving someone the cold shoulder inflicts pain only on them, beware. A new study shows that individuals who deliberately shun another person are equally distressed by the experience.

"In real life and in academic studies, we tend to focus on the harm done to victims in cases of social aggression," says co-author Richard Ryan, professor of clinical and social psychology at the University of Rochester. "This study shows that when people bend to pressure to exclude others, they also pay a steep personal cost. Their distress is different from the person excluded, but no less intense."

What causes this discomfort? The research found that complying with instructions to exclude another person leads most people to feel shame and guilt, along with a diminished sense of autonomy, explains Nicole Legate, lead author of the Psychological Science paper and a doctoral candidate at the University of Rochester. The results also showed that inflicting social pain makes people feel less connected to others. "We are social animals at heart," says Legate. "We typically are empathetic and avoid harming others unless we feel threatened."

The findings point to the hidden price of going along with demands to exclude individuals based on social stigmas, such as being gay, write the authors. The study also provides insight into the harm to both parties in cases of social bullying. 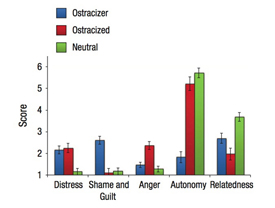 Hurting you, hurts me
"Ostracizers" who excluded others in a game of toss reported more shame, less connection with others, and a loss autonomy. Those who were excluded felt more anger.

To capture the dual dynamics of social rejection, the researchers turned to Cyberball, an online game developed by ostracism researcher Kipling Williams of Purdue University. For this study, each participant tossed a ball with two other "players" in the game. The participant is led to believe that the other players are controlled by real people from offsite computers. In fact, the virtual players are part of the experiment and are pre-programmed to either play fair (share the ball equally) or play mean (exclude one player after initially sharing the ball twice).

Before and following the online game, participants completed the same 20-item survey to assess their mood as well as their sense of autonomy, competence, and relatedness.

Consistent with earlier research on ostracism, the study found that being shunned, even by faceless strangers in a computer game, was upsetting and lowered participant's mood. "Although there are no visible scars, ostracism has been shown to activate the same neural pathways as physical pain," says Ryan. But complying with instructions to exclude others was equally disheartening, the data shows, albeit for different reasons. This study suggests that the psychological costs of rejecting others is linked primarily to the thwarting of autonomy and relatedness.

The results, write the authors, support self-determination theory, which asserts that people across cultures have basic human needs for autonomy, competence, and relatedness and meeting these hard-wired needs leads to greater happiness and psychological growth.

The researchers also tested the separate effects of simply following instructions that did not involve ostracizing others. Students directed to toss the ball equally to all players reported feeling less freedom than the "neutral" group that was allowed to play the game as they choose. However, neither of these latter groups experienced the distress evidenced by players who complied in excluding others.

These new experiments build on the classic work of Yale University psychologist Stanley Milgram and others who demonstrated that people are disturbingly willing to inflict pain on others when instructed to by an authority. As in Milgram's studies, only a small number of the participants in this current research refused to snub the other player. The authors suggest that future investigations could explore the differences between individuals who comply with and those who defy pressure to harm others.

Huffington Post
Ostracizing Others Hurts As Much As Being Excluded Ourselves, Study Finds
(March 10, 2013)

LiveScience.com
Bullies Hurt By Their Own Cruelty
(March 5, 2013)