Check Out a Human "Book" at the Human Library

WHAT: A Human Library connects community members, or "readers," with volunteer storytellers, or "books," they would not otherwise have the chance to meet. Readers can "check out" books for 30 minutes to engage in one-on-one or small group discussions about the individual's life experiences and unique interests. Human Libraries promote tolerance, celebrate differences, and encourage understanding of people who come from varied cultural or lifestyle backgrounds. 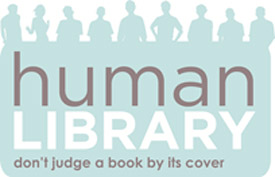 This Human Library is co-organized by the University of Rochester River Campus Libraries and the Rochester Public Library. Highlights from the upcoming event include: a woman who grew up in South Africa under apartheid; a former teacher who underwent a gender transition; and a Vietnam War veteran who said "no" when too much was asked of his sense of morality.

The first Human Library was held in Denmark in 2000 as part of an anti-violence movement. Since then, hundreds of Human Libraries have been organized throughout the world. In 2013, the University of Rochester became the first academic institution in New York State to host a Human Library. The upcoming Human Library is the third organized by the River Campus Libraries.

ADMISSION: The Human Library is free and open to the public.