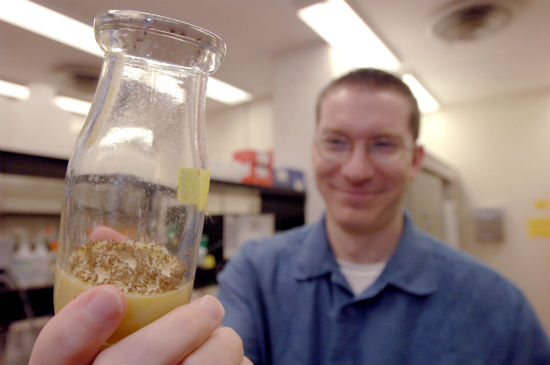 Biologists at the University of Rochester have discovered that an old and relatively unpopular theory about how a single species can split in two turns out to be accurate after all, and acting in nature.

The finding, reported in today's issue of Science, reveals that scientists must reassess the processes involved in the origin of species. The beginnings of speciation, suggests the paper, can be triggered by genes that change their locations in a genome.

"In the 1930s there was speculation that parts of chromosomes that switch from one location to another might cause a species to split into two different species," says John Paul Masly, lead author of the paper and doctoral student at the University of Rochester. "Showing that it was more than an academic idea was difficult, and required a bit of luck. Other genetic causes of speciation are clearly documented in nature, and it wasn't until we had the ability to sequence whole genomes that we could even attempt to investigate the question."

Theodosius Dobzhansky, a well-known evolutionary geneticist, studied fruit flies in the infant days of genetic research in 1930. He mapped out how it might be possible for sections of chromosomes to relocate themselves in a genome. Those mobile sections can cause sterility in inter-species hybrids, which can act as a speciation pressure.

In theory, the idea was sound, but scientists long debated whether it actually happened in nature. Eventually a competing theory involving the gradual accumulation of mutations was shown to occur in nature so often that geneticists largely dismissed the moving gene hypothesis.

"We knew going into this that it was a risky experiment," says Masly. "But we hoped we could pull it off."

Over the span of the six-year project, the prospects of bolstering the controversial evolutionary idea looked increasingly bleak.

Masly brought together two species of fruit flythe workhorses of the genetics worldto see what genes were active when they were crossbred. One species, Drosophila melanogaster, had its genome already sequenced, making that part of the job much easier. The second species, Drosophila simulans, was still in the process of being sequenced, which meant much of the work had to be done by hand by Masly and his collaborators.

Masly knew that chromosome #4 on melanogaster held a gene that was somehow very important for fertilityinformation found earlier by Rochester biologist H. Allen Orr. Crossbreeding the flies proved tricky because a few million years of evolution separated the species, but after a few nudges the flies produced what Masly was looking fora sterile male.

This is when Dobzhansky's 70-year-old hypothesis nearly died for good.

The reigning theory of speciation says that the genes causing hybrid sterility must have diverged slowly by normal evolutionary changes. To determine if this was true, Masly had only to look at chromosome #4 and find the gene on it that caused the hybrid sterility.

But there was no gene there.

"Something was all wrong. We couldn't find the gene and we were this close to giving up on the whole project"

"There was a great, 'Oh no,' moment," says Masly. "I'd been working on this for six years and it was starting to look like it was all for nothing. Something was all wrong. We couldn't find the gene and we were this close to giving up on the whole project."

But once again, insights from the past came into play. Masly and Orr, Masly's advisor and professor of biology at the University of Rochester, were talking one day when Orr suddenly recalled an off-hand comment from a scientist named Hermann J. Muller in a paper 60 years earlier. Muller speculated that perhaps since the sterility in the flies is so recessivemeaning it's almost completely non-functionalperhaps the gene in question has jumped clear off the chromosome.

"It had never occurred to us that the gene might have moved right off chromosome #4 in simulans," says Masly. As the simulans' genome was newly sequenced, Masly called a colleague, geneticist Corbin D. Jones, a co-author of the paper and Rochester graduate, who was studying the simulans genome.

Over the phone one day in the lab, Jones told Masly what his analysis turned up.

"You're not going to believe this, but you're right," said Jones. "It's not on the fourth chromosome. It's on the third."

"That was really exciting," says Masly. "It was completely unexpected and it made the cause of this hybrid's sterility very simple; the gene's on number four in one species and on number three in the other, so when you mate the two, every now and then you'll get a male with a combination that includes no gene at all. These guys are sterile because they completely lack a gene that's necessary for fertility."

The gene, called JYAlpha, is one of the same genes that is essential for sperm motility in the flies, as well as in humans and other mammals.

Masly's work shows a back door through which speciation can start. If the right genes jump around in the genome, a population can begin creating individuals that can't successfully mate with the general population. If other speciation pressures, like geographic isolation, are added to the mix, the pressure may be enough to split one species into two new species.

When asked if JYAlpha may be responsible for melanogaster and simulans' initial split a few million years ago, Masly replied, "That's lost to history."