A Reason Why Video Games Are Hard to Give Up 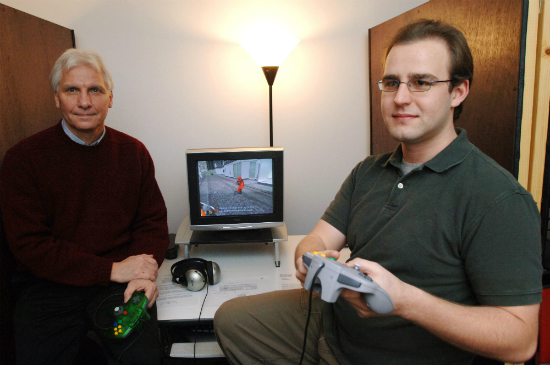 Kids and adults will stay glued to video games this holiday season because the fun of playing actually is rooted in fulfilling their basic psychological needs.

Psychologists at the University of Rochester, in collaboration with Immersyve, Inc., a virtual environment think tank, asked 1,000 gamers what motivates them to keep playing. The results published in the journal Motivation and Emotion this month suggest that people enjoy video games because they find them intrinsically satisfying.

"We think there's a deeper theory than the fun of playing," says Richard M. Ryan, a motivational psychologist at the University and lead investigator in the four new studies about gaming. Players reported feeling best when the games produced positive experiences and challenges that connected to what they know in the real world.

The research found that games can provide opportunities for achievement, freedom, and even a connection to other players. Those benefits trumped a shallow sense of fun, which doesn't keep players as interested.

"It's our contention that the psychological 'pull' of games is largely due to their capacity to engender feelings of autonomy, competence, and relatedness," says Ryan. The researchers believe that some video games not only motivate further play but "also can be experienced as enhancing psychological wellness, at least short-term," he says.

Ryan and coauthors Andrew Przybylski, a graduate student at the University of Rochester, and Scott Rigby, the president of Immersyve who earned a doctorate in psychology at Rochester, aimed to evaluate players' motivation in virtual environments. Study volunteers answered pre- and post-game questionnaires that were applied from a psychological measure based on Self-Determination Theory, a widely researched theory of motivation developed at the University of Rochester.

Rather than dissect the actual games, which other researchers have done, the Rochester team looked at the underlying motives and satisfactions that can spark players' interests and sustain them during play.

Revenues from video gameseven before the latest Wii, PlayStation 3, and Xbox systems emergedsurpass the money made from Hollywood films annually. A range of demographic groups plays video games, and key to understanding their enjoyment is the motivational pull of the games.

Four groups of people were asked to play different games, including one group tackling "massively multiplayer online" gamesMMO for short, which are considered the fastest growing segment of the computer gaming industry. MMOs are capable of supporting hundreds of thousands of players simultaneously. For those playing MMOs, the need for relatedness emerged "as an important satisfaction that promotes a sense of presence, game enjoyment, and an intention for future play," the researchers found.

Though different types of games and game environments were studied, Ryan points out that "not all video games are created equal" in their ability to satisfy basic psychological needs. "But those that do may be the best at keeping players coming back."