In today's issue of the journal Cognition, a University of Rochester scientist suggests it's possible to help children learn difficult concepts by providing gestures as an additional and potent avenue for taking in information.

"We've known for a while that we use gestures to add information to a conversation even when we're not entirely clear how that information relates to what we're saying," says Susan Wagner Cook, lead author and postdoctoral fellow at the University. "We asked if the reverse could be true; if actively employing gestures when learning helps retain new information."

Cook used a variation on a classic gesturing experiment. When third graders approach a two-sided algebra equation, such as "9+3+6=__+6" on a blackboard, they will likely try to solve it in the simple way they have always approached math problems. They tend to think in terms of "the equal sign means put the answer here," rather than thinking that the equal sign divides the problem into two halves. As a result, children often completely ignore the final "+6."

However, even when children discard that final integer, they will often point to it momentarily as they explain how they attacked the problem. Those children who gestured to the number, even though they may seem to ignore it, are demonstrating that they have a piece of information they can't reconcile. Previous work has shown that the children with that extra bit of disconnected knowledge are the ones ready to learn, which suggests that perhaps giving children extra information in their gesture could lead to their learning.

Cook divided 84 third and fourth graders into three groups. One group expressed the concept verbally without being allowed to use gestures. The second group was allowed to use only gestures and no speech, and the third group employed both. Teachers gave all the children the same instruction, which used both speech and gesture.

After three weeks, the children were given regular in-school math tests. Of those children who had learned to solve the problem correctly, only a third of the speech-only students remembered the principles involved, but that figure rose dramatically for the speech-and-gesture, and the gesture-only group, to 90-percent retention.

Cook plans to look into how gesturing could be implemented effectively in classrooms to make a noticeable improvement in children's learning.

"Gesturing does have one clear benefit," Cook adds. "It's free." 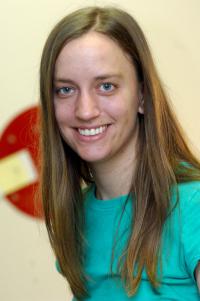