Hajim succeeds G. Robert Witmer Jr., who has chaired the board since 2003. Witmer, as well as his predecessor as chair, Robert B. Goergen, each was named Chairman Emeritus.

"Bob Witmer is a gentleman of uncommon wisdom, sensitivity and quiet strength, and his leadership has been critical to the progress the University has made in recent years," said University President Joel Seligman.

A Phi Beta Kappa graduate of Rochester in 1959, Witmer was also co-captain of the varsity basketball team and he is a charter member of the University's Sports Hall of Fame. After graduating from Harvard Law School in 1962, he began a long and successful career at Nixon Peabody LLP, serving as chairman of the Management Committee from 1984 to 1987 and in 1991 and chair of the firm's Environmental Law Department from 1976 to 1983. He has also served as president of the New York State Bar Association and as a member of the American Bar Association's House of Delegates. He is a life member of the American Law Institute and a charter member of the New York State Judicial Law Institute on Professionalism in the Law. He also has served as president of the Rochester Rotary Club, one of the oldest and largest Rotary Clubs in the United States. At the University, he has served as president of the Eastman Dental Center Board of Directors, chair of the Trustees' Council of the College, and chair of the University Alumni Council. He has been a member of the University Board of Trustees since 1979.

About his successor as board chair, Witmer said: "The University has completed a very successful transition in its presidency and I am delighted to see the tremendous excitement and promise generated under the leadership of President Seligman. For many of the 29 years I have served on the board, I have had the privilege of working with my good friend Ed Hajim, and I know of no more charismatic or stronger leader for the board during this important time for the University and our community."

Hajim earned his bachelor's degree in chemical engineering from the University of Rochester in 1958 and has served the University on committees and councils for more than 30 years and as a trustee since 1988.

After receiving an MBA with distinction from Harvard Business School in 1964, he began a remarkable investment career and has held senior positions with the Capital Group, E. F. Hutton, and Lehman Brothers. In 1983, he went on to become chairman and CEO of Furman Selz, which he sold twice, first to Xerox in 1987 and then to ING Group in 1997. He became chairman and CEO of ING Aeltus Group before starting his own investment funds in 2002. Hajim's dedication to causes about which he cares deeply is evident in his service as a member of the board of trustees of the Nantucket Conservation Foundation and the Ocean Reef Foundation. Previously, he has served as president of the Harvard Business School Alumni Association, chairman of the board of trustees of the Brunswick School, as a trustee and chairman of the investment committee at Greenwich Hospital and as a member of the investment committee at the Brookings Institution. He is also a founder and member of the board of directors of the Nantucket Golf Club.

During his undergraduate years in Rochester, he was a Keidaean and the finance committee chair for the Students' Association. He is now serving his fourth term as a University trustee and served as chairman of the Investment Committee for 15 years, from 1988 to 2003, as well as on the Development, Executive and Presidential Search Committees. He also has served as national reunion co-chair in 2000, the chair of the Campaign for Sports and Recreation from 1998 to 2001, and a member of the President's Leadership Council from 1975 to 1980.

His gifts to the University include the Hajim Scholarship Fund, and in 1999 he made a major gift to help fund construction of the Robert B. Goergen Athletic Center that includes the Edmund A. Hajim Alumni Gymnasium. In 2006, he provided funding for the William E. Simon Graduate School of Business Administration's Summer Business Institute, an immersion program for college juniors, seniors, or recent graduates. And in 2007, he was awarded the Hutchison Medal, the University's highest alumni award.

Moore is a partner with Nixon Peabody LLP, one of the nation's largest law firms. She chairs the firm's Diversity Action Committee and helped her firm rank among Fortune magazine's "100 Best Companies to Work For" in 2006 and 2007. She has previously served as counsel to New York Gov. Mario Cuomo, chairperson of the New York State Ethics Commission, and director of the Governor's Office of Employee Relations. She also serves as a trustee of Cornell University, and she chairs the New York State Commission on Increasing Diversity in the State Workforce.

Prokupets is co-founder with her husband of Lenel Systems International, which they built into a leading provider of software and integrated systems for the corporate and government security markets. The company is listed in the Inc. 500 and the Deloitte & Touche/Forbes Technology Fast 500 lists. Prokupets is also a member of the board of the Metropolitan Opera.

Sands is chairman of the board of Constellation Brands, Inc., a leading international producer and marketer of beverage alcohol brands and the largest wine company in the world. Sands served as CEO of Constellation from 1993 to 2007, when he was succeeded by his brother, Robert. Sands is currently a member of the Executive Advisory Committee of the University's Simon School, a trustee of the Rochester Institute of Technology, chairman of the Friends of the Finger Lakes Performing Arts Center and chairman of Education Enterprise of New York, Inc., an organization that promotes effective programs designed to improve educational systems and increase student success. In 2001 he was named to the Rochester Business Hall of Fame.

Wilmot is president and chairman of the board of Wilmorite, a leading commercial real estate development and management company that has developed 16 regional shopping centers in eight states encompassing more than 20 million feet of retail space. He is a member of the Wilmot Cancer Center Campaign Steering Committee and has served on the Wilmot Cancer Center Director's Advisory Board and the board of the University of Rochester Medical Center. He is a trustee of the Rochester Institute of Technology, Nazareth College of Rochester, St. Bernard Institute and the James P. Wilmot Cancer Center. He is also a member of the American Society of Civil Engineers.

Democrat and Chronicle
University of Rochester names Edmund Hajim board chairman
(May 20, 2008) 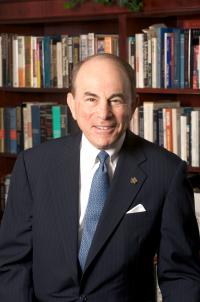