Mountains may experience a "growth spurt" that can double their heights in as little as two to four million yearsseveral times faster than the prevailing tectonic theory suggests.

In today's issue of Science, Carmala Garzione, associate professor of geology at the University of Rochester, says this rapid uplift means the current theory of plate tectonics will have to be substantially modified to include a process called "delamination."

The traditional method of estimating mountain growth is through understanding the history of folding and faulting of the Earth's upper crust. Under this paradigm, geologist have estimated that Andes rose gradually over the past 40 million years.

Garzione and her collaborators, John M. Eiler, professor of geochemistry at California Institute of Technology, and Prosenjit Ghosh, assistant professor of atmospheric and oceanic sciences at the Indian Institute of Science in Bangalore, used recently developed techniques to measure how ancient rainfall and surface temperature altered the chemical composition of a mountain's soil. By studying sedimentary basins in the high Andes Mountains, the team could determine when and at what altitude these ancient sediments were deposited. That record of altitude changes shows that the Andes Mountains rose slowly for tens of millions of years, but then suddenly lifted much faster between 10 and 6 million years ago.

The work of one of Garzione's post-doctoral research fellows, Gregory D. Hoke, corroborates the swift-rise theory and shows that not just the mountains, but a broad region more than 350 miles wide rose to some degree with the Andes. In research soon to be published in the journal Earth and Planetary Science Letters, Hoke describes his findings on how rivers carved deep canyons into the flanks of the Andes as the mountain range rose. By dating the incisions and mapping the depth and extent of the canyons, Hoke shows that the surface uplift that occurred in the sedimentary basin where Garzione took her measurements must have happened across the entire width of the Andes Mountain range.

Garzione and her colleagues show that with the addition to their new findings, a broad range of geologic indicators, including the history of folding and faulting, erosion, volcanic eruptions, and sediment accumulation suggest a hotly debated tectonic process called delamination likely at work, says Garzione. Although delamination has been proposed for decades, Garzione says it has been controversial because mechanical models of mountain building have a hard time reproducing it, and, until the new findings, there has been a lack of reliable paleoelevation measurements.

When oceanic and continental plates come together, geologists believe the continental crust buckles. On the surface, the buckling manifests itself as a rising mountain range, but beneath the crust, the buckling creates a heavy, high-density "root" that holds the crust down like an anchor, says Garzione. Conventional tectonic theory says that convection of the fluid mantle deep in the Earth slowly erodes this heavy root like a stream wearing down a rock, allowing mountains to gradually rise as the crust shortens and thickens.

However, according to Garzione, the delamination theory suggests that instead of eroding slowly away, the root heats up and oozes downward like a drop of molasses until it abruptly breaks free and sinks into the hot fluid mantle. The mountains above, suddenly free of the weight of the blob, would rush upward and, in the case of the Andes, lift from a height of less than two kilometers to about four kilometers in less than 4 million years.

Some of the broader implications of rapidly-rising mountain ranges are their effect on regional climate and evolution, says Garzione. She is currently working with paleontologists, Darin A. Croft, assistant professor of anatomy at Case Western Reserve University, and Bruce MacFadden, vertebrate paleontology curator and professor at the University of Florida, to address some of the questions surrounding how a quick-rising mountain range might affect regional climate and faunal diversity in South America, in the late Miocene period when the Andes rose.

This research was funded by the National Science Foundation. 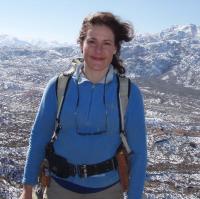 Garzione high in the Andes, where she studies paleoelevation; the science of how mountains rise.