"The School of Engineering, which has grown considerably in prominence and achievement under Kevin Parker's leadership, will play a vital role in our strategic growth over the next decade," said University of Rochester President Joel Seligman. "Robert Clark is a distinguished researcher, a dedicated teacher, and a committed and wise academic leader. He is a superb choice to guide the school through the exciting opportunities that lie ahead."

Edmund "Ed" Hajim, chairman of the University's Board of Trustees and a 1958 engineering graduate of the University, said: "I know I speak for the entire board in expressing my enthusiasm over the appointment of Rob Clark to lead our School of Engineering and Applied Sciences. His appointment is another exciting step forward for the University, and my colleagues and I look forward to supporting him in his work to take the school to the next level of distinction."

Clark is an expert in the science of acoustics and in bionanomanufacturing. His work in these areas has led to 100 journal publications and earned him awards including the Lindsey award of the Acoustical Society of America, the National Science Foundation Career Program Award, the Presidential Early Career Award for Scientists and Engineers, and the NASA Group Achievement Award. He is a fellow of both the Acoustical Society of America and the American Society of Mechanical Engineers. During six years as senior associate dean at Duke, he oversaw hiring for the implementation of the Pratt School's strategic plan, helped to double the number of women on the faculty and triple the research expenditures. In the recent year while serving as dean, he initiated curricular innovations for non-engineering students and presided over fundraising.

He was recommended for the deanship after a national search by a committee led by Duncan Moore, vice provost for entrepreneurship at the University of Rochester and director of the Center for Entrepreneurship, and he was appointed by Peter Lennie, the Robert L. and Mary L. Sproull Dean of the Faculty of Arts, Sciences, and Engineering.

"I couldn't be more pleased to welcome Rob Clark to Rochester," said Lennie. "The search committee did an outstanding job identifying a deep pool of excellent candidatesitself a testament to the distinction of the School of Engineeringand of recommending the outstanding individual in that pool. Rob Clark's accomplishments as an engineer, his successes as an administrator at Duke, and his qualities as a leader and a colleague made him the standout choice to help us enlarge the achievements, influence, and prominence of the School. I'm delighted to welcome him to our team."

Clark said he believes the School's many strengths will help it take advantage of exciting opportunities that lie ahead.

"As we face greater competition for resources and as U.S. industry struggles to stay globally competitive, we have an obligation to both prepare the next generation of leaders in engineering and also to enlighten broader populations of students about the important societal role of science and technology," Clark said. "The School of Engineering and Applied Sciences, with its high quality faculty and students and its growing connections to other areas of the University of Rochester, is very well positioned to be a leader in those efforts. I am honored and excited to be able to help guide the school in that important work."

At Duke, Clark also has served as a member of the executive committee of the Academic Council, the university-wide faculty governance body; was founding chair of the materials governance committee; and served as the chair of the patent policy committee. He also served as director of Duke's Center for Biologically Inspired Materials and Material Systems, where, with modest seed funding, he established a multi-million dollar program involving more than two dozen faculty members.

Clark earned his doctorate in mechanical engineering from the Virginia Polytechnic Institute in Blacksburg, Va., and joined Duke's Department of Mechanical Engineering and Materials Science in 1992.

Parker, a professor of electrical and computer engineering, radiology, and bioengineering, also served from 1992 to 1998 as chair of the Department of Electrical Engineering and University Associate Vice Provost for Research and Graduate Affairs. In 1998, he also became director of the Rochester Center for Biomedical Ultrasound, and in 2005 he received the title of William F. May Professor of Engineering. 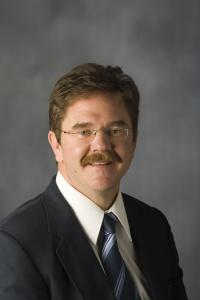