Mark Zupan, who has served as dean of the University of Rochester's William E. Simon Graduate School of Business Administration since 2004, has been reappointed to a second, five-year term.

"Mark's creativity, enthusiasm and leadership skills have already substantially improved the Simon School," said University President Joel Seligman. "I have no doubt that he will continue to inspire the school's increasing prominence among the nation's leading schools of business. We are fortunate to have Mark on board for another five years of leadership."

"Mark is a dean of energy, commitment, integrity, and unsurpassed work ethic, and his leadership has advanced the Simon School by virtually every relevant measure," said Provost Ralph Kuncl. "It has been very rewarding to learn that my most positive views of Mark's contributions are matched by the students, faculty, and alumni of the Simon School."

Kuncl explained that during the evaluation process he both worked with the elected Faculty Review Committee and also solicited input from the entire Simon School faculty. That input, he said, was uniformly positive and showed great eagerness for Zupan's continued leadership.

Kuncl listed several areas of particular success in Zupan's first term. Fundraising has increased for the Annual Fund by over five-fold. Major gift giving also has grown significantly including commitments from Peter Simon and the Simon Family Foundation ($3.5 million); Joe and Janice Willett ($2 million); Pam and Arunas Chesonis ($1.5 million); Mike and Marilyn Rosen ($1.5 million); Mike and Diane Jones ($1.5 million); Ed and Agnes Ackley ($1.2 million); Mark and Carolyn Ain ($1 million); and Roy and Fay Whitney ($1 million). This has been accompanied by reengagement of alumni through the Executive Advisory Committee and a newly revised Alumni Council.

Much of the innovation under Zupan's leadership has been designed to foster a greater entrepreneurial spirit and to fuel successful differentiation of the Simon School among its competitors.

Over the last three years, the Simon School has been one of the fastest growing full-time M.B.A. programs in the country in percentage terms. For the past four years, it also has been one of the top two business schools for improvement in the quality of full-time M.B.A. students among the top 50 as ranked by U.S. News & World Report. In addition, the school's Early Leaders Initiative has increased the diversity of the student body, especially through increases in the percentage of female students.

Partly as a result of the innovations in the curriculum, Simon recently was ranked by Business Week as the first private business school and the fourth U.S. school for return on investment. It is also offering several new one-year specialized master's programs with concentrations in medical management, marketing, general management, accounting, and finance, and it is negotiating partnerships with leading business schools in Korea and Chile, all of which has helped bring Simon's overall student population to an all-time high.

Several improvements also have been made to the Executive M.B.A. program, including offering more efficient scheduling of classes, greater opportunities for specialization, and expansion of the Swiss Executive M.B.A program jointly offered with the University of Bern. Simon is also in the process of expanding its non-degree executive education offerings.

Zupan was previously dean of the University of Arizona's Eller College of Business and Public Administration, where he had served since 1997.

Before his appointment as dean at Arizona, Zupan had taught at the University of Southern California's School of Business Administration (where he also served as associate dean of the master's programs). He holds his bachelor of arts degree from Harvard University and his Ph.D. in economics from Massachusetts Institute of Technology. He was a teaching fellow in Harvard's Department of Economics while studying toward his doctoral degree. He also has been a visiting faculty professor at the Amos Tuck School of Business Administration at Dartmouth College.

His scholarship has focused on industrial organization, regulation, and political economy. He is co-author, with E. K. Browning, of Microeconomic Theory and Applications (John Wiley and Sons) and, with A. M. Marino and T. W. Gilligan, of Microeconomic Cases and Applications (HarperCollins). He has served as co-editor of the journal Economic Inquiry, and is on the editorial boards of Public Choice, The Journal of Business Economics, and Research in Law and Economics.

The Simon School is currently ranked among the leading graduate business schools in the world. Recognized for its scholarship in management, the school employs a distinctive approach to business education through its flexibility, innovation, youth, size, global outlook, and vision. The school has approximately 1,200 full- and part-time students and 68 faculty members. 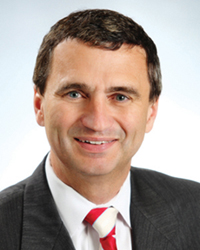