Science has relevance in every urban girl's life. It trickles in local drinking water. It settles in the soil of city neighborhoods, schoolyards, and parks. And, it tiptoes among urban wildlife.

A National Science Foundation (NSF) $1,249,984 grant awarded to the University of Rochester's Warner School of Education will provide powerful experiences for hundreds of urban teen girls to re-envision their neighborhoods and the world around them and their role in shaping it by participating in rich, inquiry-based investigations that will help them to develop their identities as scientists and agents of change in their communities.

The grant builds on years of Warner School Associate Professor April Luehmann's commitment to engaging young women from minority groups and of low socioeconomic status in quality informal science education through Science STARS (Students Tackling Authentic and Relevant Science). With the NSF funds, Luehmann will expand and enhance the work of Science STARS, an innovative afterschool program that has supported the interest of urban middle school girls in science for nearly a decade. Originally piloted in Rochester, N.Y., the program will grow locally, expand to two new citiesLansing, Mich. and Seattle, Wash.to understand its scalability, and further document and study how the social, cultural, and spatial aspects of community-based informal science learning can be designed and utilized to nurture positive science identities for urban school girls through inquiry-based science.

"Rochester schools, like schools across the country, have achievement gaps when it comes to the sciences," said Anibal Soler, Jr., principal at Rochester City School District's East High School, where Science STARS took place the past two years. "Here locally, Science STARS has planted seeds of scientific knowledge, participation, and enthusiasm in Rochester girls that will last a lifetime. We are thrilled to partner with programs like Science STARS to provide girls with the necessary tools to increase their confidence in science and their ability to talk about science and to pursue their science interests."

The enhanced Science STARS program will provide more than 200 urban female teens with out-of-school time opportunities over the next three years to explore science in their community, improve their scientific literacy and literacy skills, and enhance their attitudes about science. The funding also will have a profound impact on soon-to-be new science teachers studying science education as they move beyond the traditional ways of teaching science.

Science STARS, which is part of the larger Get Real! Science Project, a teacher preparation program designed to engage students in real science, is closely allied with the NSF's priorities of broadening the participation of girls in science. Luehmann, principal investigator on the four-year project who created Science STARS, said that the afterschool program acknowledges and celebrates what girls bring to science.

"It is crucial that young women have rich and extensive opportunities to experience the creative, collaborative, and compelling work of real science at a time in girls' lives when they are making key decisions about high school courses and careers in science," said Luehmann. "Science STARS targets girls at an age when they are receiving mixed messages about what science is, how science is done, and what their roles should be in science and science learning. Teens often find science uninteresting because they do not see the relevance to their everyday lives or communities. The enhanced program will not only help girls to understand science, but it will also give them a chance to see themselves as capable of doing science and using their science to make noticeable changes in their own backyard."

The free Science STARS program, which is expanding from 10 weeks in the fall to a total of 20 weeks during the full school year, plus three weekend getaways, for a total of 65 hours, will work with seventh- through twelfth-grade students at three different sites. Over the next three years, Science STARS will serve girls from East High School, and, with support from Michigan State University and the University of Washington, will expand to serve students from Lansing and Seattle city schools the last year. Luehmann's co-investigators on the grant include Angela Calabrese Barton from Michigan State University and Jessica Thompson from the University of Washington.

With complementary focal points of both science and positive change, Science STARS will support girls as they learn and do science with the goal of improving their communities. Mentorship from Warner master's students who are studying to become science teachers, local female engineers and scientists, and University female undergraduates studying ecology and neuroscience, will enable the girls to work alongside professionals and students while conducting authentic, ecology-based science investigations that challenge and empower them to make a positive impact in the environment and to develop a deep awareness of what they do and how it can change the future in a powerful way.

The first half of the school year will be devoted to carrying out original empirical scientific investigations situated in the community, where girls will pursue a question of their choice and then share their results with the public at a community-wide science conference. As an extension of this work, the second half of the school year will focus on honing literacy skills, when girls work directly with professional filmmakers to create a science documentary that airs in local cinemas for the community and on YouTube and other educational outlets as a resource for science educators.

"The enhanced program will allow us to do more for the girlsto better their lives and to strengthen their self-confidence in science and themselves," said Lisa Zeller, a master's student in the science teacher preparation program. "Our goal is to strengthen girls' confidence in science. Through strategic planning and activities, we will be able to form relationships with the girls, providing them with multiple opportunities to self-reflect and see their true growth through this program."

City students are not the only ones who will benefit from the program. Master's students who are preparing to become science teachers will run the afterschool program, where they will work in informal settings to develop culturally-relevant, community-based, and inquiry-based science units and lessons around urban ecology that can be used in their classrooms in the future.

"We will have the opportunity to teach students how to do science by using inquiry-based lessons and activities that allow them to not only ask questions about natural phenomena around them, but to conduct their own investigations in an attempt to understand those phenomena," added Zeller, who hopes to learn more about herself as a teacher from this experience. "Graduating from a rural high school and rural private college, I came to Warner to embrace the urban setting. While I have already learned a lot about teaching in an urban environment, I hope to learn even more with hands-on teaching through Science STARS."

One of the most impactful components of the grant is the academic research that it will afford Luehmann and her colleagues. "Using a research lens to investigate how teens critically participate in and shape the social, political, historical, and physical spaces of their science work can illuminate how young women from minority groups understand and position themselves with respect to scienceas a way of thinking, as a body of knowledge, and as a discourse of power," added Luehmann. "Collaboratively taking on these essential social justice issues with leading scholars in feminist science education across the country is an incredible opportunity for me and my team here in Rochester."

For more information on Science STARS, visit http://getrealscience.com/STARS/ or contact April Luehmann at (585) 275-3010 or aluehmann@warner.rochester.edu. 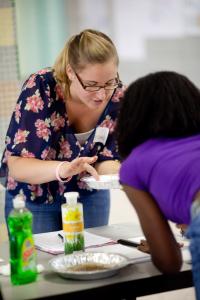 Lisa Zeller, a master\'s student in the science teacher preparation program at the Warner School of Education.