Author Linda LeGarde Grover has been named the recipient of the 2011 Janet Heidinger Kafka Prize, presented by the Susan B. Anthony Institute for Gender and Women's studies at the University of Rochester. The annual award will be given for Grover's debut short story collection The Dance Boots.

Grover will receive the award and $7,500 prize on Thursday, Nov. 3 at 5 p.m. in the Welles-Brown Room in Rush Rhees Library on the University's River Campus. As part of the award ceremony, Grover will read from the prize-winning stories.

"We are especially excited about this year's event because it marks the 35th anniversary of the Prize. We're thrilled that Grover is the recipient," said Honey Meconi, Susan B. Anthony Professor of Gender and Women's studies and director of the Susan B. Anthony Institute.

Grover is an associate professor of American Indian Studies at the University of Minnesota-Duluth and a member of the Bois Forte Band of the Minnesota Chippewa Tribe in northern Minnesota. She is the co-author of A Childhood in Minnesota: Exploring the Lives of Ojibwe and Immigrant Families, 1880-1920 and the author of the poetry chapbook The Indian at Indian School.

Co-winner of the 2009 Flannery O'Conner Award for Short Fiction from the University of Georgia Press, The Dance Boots tells eight interconnected stories about the struggles of members of a native North American Ojibwe community as they face challenges to their traditional way of life.

The Janet Heidinger Kafka award recognizes an American woman writer whose book-length work has been published in the previous year. Previous winners include Anne Tyler, Ann Patchett, Ursula K. Le Guin, and Toni Morrison, all of whom won the award before becoming famous for their prose.

The award honors Janet Heidinger Kafka, a young editor who was killed in an automobile accident as her career was beginning. Her friends and family created the endowment that supports the award in memory of Kafka's high literary standards and personal ideals.

This year's selection committee was led by Kathy McGowan, education and women's studies librarian at Rush Rhees Library, with Terry Platt, professor of biochemistry and biology at Rochester, and Jean Pederson, associate professor of history at the University's Eastman School of Music. 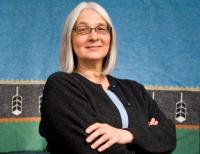