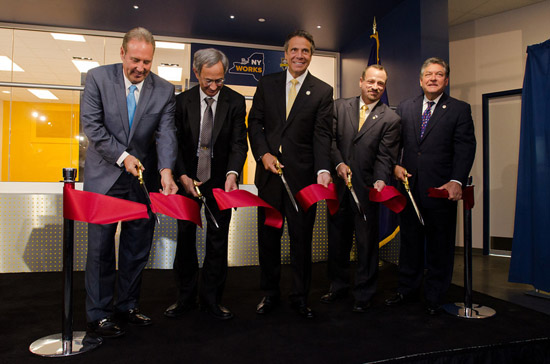 New York State Governor Andrew Cuomo and officials from the University of Rochester and IBM today opened the doors on a new facility dedicated to applying cutting-edge computational power to solve health care's most complex problems. The Health Sciences Center for Computational Innovation (HSCCI) is home to IBM's next generation supercomputer  the Blue Gene/Q  making it one of the 5 most powerful university-based supercomputing sites in the nation.

"With this partnership, New York has an unprecedented opportunity to participate in cutting edge healthcare research while creating hundreds of jobs at the University and in the Finger Lakes region," said Governor Cuomo. "Together with my colleagues in the legislature and educational institutions such as the University of Rochester, we are changing the way the state invests in economic development through the Regional Councils. This is the type of partnership we are starting to see throughout the state and I look forward to working with the private sector to transform New York into the best place to start and grow businesses." 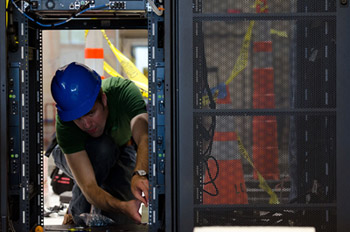 Workers install and begin setup on IBM's next generation supercomputer, the Blue Gene/Q, at the University of Rochester Data Center in July.

"We are deeply grateful to Governor Cuomo, Lt. Governor Duffy, our delegation in Albany, and the community leaders who have supported this transformative project," said Joel Seligman, president of the University of Rochester. "This partnership will make Rochester an international leader in efforts to harness high performance computing to broaden our understanding of human health and design the next generation of diagnostics and treatments for disease."

Renovations to the University's data center and acquisition of the Blue Gene/Q were made possible though a $5 million award from New York State at the recommendation of the Finger Lakes Regional Economic Development Council. Last year, the council identified the HSCCI as a priority project. The Center for Governmental Research estimates that the project could create 900 jobs and in the community and generate $205 million in new research funding over the next 10 years.

The Blue Gene/Q is the pinnacle of high performance computing and is 15 times more powerful than IBM's previous generation supercomputer. It is also the world's most energy efficient computer system. The supercomputer, which will enable scientists to sift through mountains of data and create complex models, has vast potential application in the medicine, and scientists at the University of Rochester are already applying high performance computing to research programs in vaccine development, brain injury, and cardiac disease.

About the Health Sciences Center for Computational Innovation (HSCCI)