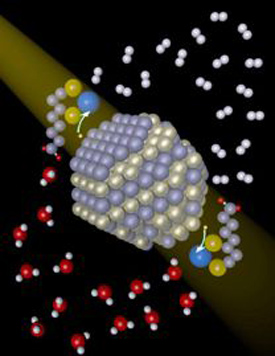 Hydrogen is an attractive fuel source because it can easily be converted into electric energy and gives off no greenhouse emissions. A group of chemists at the University of Rochester is adding to its appeal by increasing the output and lowering the cost of current light-driven hydrogen-production systems.

The work was done by graduate students Zhiji Han and Fen Qiu, as part of a collaboration between chemistry professors Richard Eisenberg, Todd Krauss, and Patrick Holland, which is funded by the U.S. Department of Energy. Their paper will be published later this month (Nov. 23) in the journal Science.

The chemists say their work advances what is sometimes considered the "holy grail" of energy scienceefficiently using sunlight to provide clean, carbon-free energy for vehicles and anything that requires electricity.

One disadvantage of current methods of hydrogen production has been the lack of durability in the light-absorbing material, but the Rochester scientists were able to overcome that problem by incorporating nanocrystals. "Organic molecules are typically used to capture light in photocatalytic systems," said Krauss, who has been working in the field of nanocrystals for over 20 years. "The problem is they only last hours, or, if you're lucky, a day. These nanocrystals performed without any sign of deterioration for at least two weeks."

Richard Eisenberg, the Tracy H. Harris Professor of Chemistry, has spent two decades working on solar energy systems. During that time, his systems have typically generated 10,000 instancescalled turnoversof hydrogen atoms being formed without having to replace any components. With the nanocrystals, Eisenberg and his colleagues witnessed turnovers in excess of 600,000.

The researchers managed to overcome other disadvantages of traditional photocatalytic systems. "People have typically used catalysts made from platinum and other expensive metals," Holland said. "It would be much more sustainable if we used metals that were more easily found on the Earth, more affordable, and lower in toxicity. That would include metals, such as nickel."

Holland said their work is still in the "basic research stage," making it impossible to provide cost comparisons with other energy production systems. But he points out that nickel currently sells for about $8 per pound, while the cost of platinum is $24,000 per pound.

While all three researchers say the commercial implementation of their work is years off, Holland points out that an efficient, low-cost system would have uses beyond energy. "Any industry that requires large amounts of hydrogen would benefit, including pharmaceuticals and fertilizers," said Holland.

The process developed by Holland, Eisenberg, and Krauss is similar to other photocatalytic systems; they needed a chromophore (the light-absorbing material), a catalyst to combine protons and electrons, and a solution, which in this case is water. Krauss, an expert in nanocrystals, provided cadmium selenide (CdSe) quantum dots (nanocrystals) as the chromophore. Holland, whose expertise lies in catalysis and nickel research, supplied a nickel catalyst (nickel nitrate). The nanocrystals were capped with DHLA (dihydrolipoic acid) to make them soluble, and ascorbic acid was added to the water as an electron donor.

Photons from a light source excite electrons in the nanocrystals and transfer them to the nickel catalyst. When two electrons are available, they combine on the catalyst with protons from water, to form a hydrogen molecule (H2).

This system was so robust that it kept producing hydrogen until the source of electrons was removed after two weeks. "Presumably, it could continue even longer, but we ran out of patience!" said Holland.

One of the next steps will be to look at the nature of the nanocrystal. "Some nanocrystals are like M&Ms  they have a core with a shell around it," said Eisenberg. "Ours is just like the core. So we need to consider if they would they work better if they were enclosed in shells."