Turning Waste Heat into Electricity on the Nanoscale 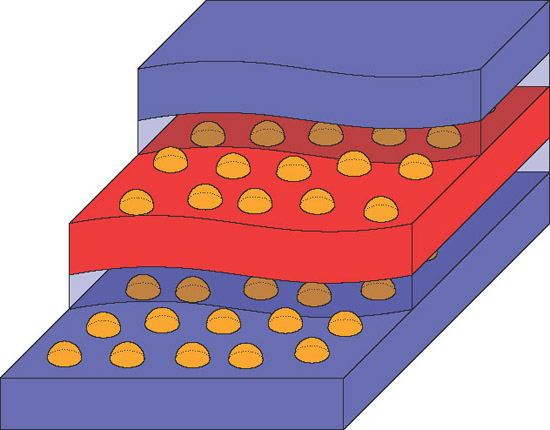 A new type of nanoscale engine has been proposed that would use quantum dots to generate electricity from waste heat, potentially making microcircuits more efficient.

"The system is really a simple one, which exploits certain properties of quantum dots to harvest heat," Professor Andrew Jordan of the University of Rochester said. "Despite this simplicity, the power it could generate is still larger than any other nanoengine that has been considered until now."

The engines would be microscopic in size, and have no moving parts. Each would only produce a tiny amount of power  a millionth or less of what a light bulb uses. But by combining millions of the engines in a layered structure, Jordan says a device that was a square inch in area could produce about a watt of power for every one degree difference in temperature. Enough of them could make a notable difference in the energy consumption of a computer.

A paper describing the new work is being published in Physical Review B by Jordan, a theoretical physics professor, and his collaborators, Björn Sothmann and Markus Buttiker from the University of Geneva, and Rafael Sánchez from the Material Sciences Institute in Madrid.

Jordan explained that each of the proposed nanoengines is based on two adjacent quantum dots, with current flowing through one and then the other. Quantum dots are manufactured systems that due to their small size act as quantum mechanical objects, or artificial atoms.

The path the electrons have to take across both quantum dots can be adjusted to have an uphill slope. To make it up this (electrical) hill, electrons need energy. They take the energy from the middle of the region, which is kept hot, and use this energy to come out the other side, higher up the hill. This removes heat from where it is being generated and converts it into electrical power with a high efficiency.

Quantum dots can be grown in a self-assembling way out of semiconductor materials. This allows for a practical way to produce many of these tiny engines as part of a larger array, and in multiple layers, which the authors refer to as the Swiss Cheese Sandwich configuration (see image).

More on “Turning Waste Heat into Electricity on the Nanoscale”

Read the Phys. Rev. B paper