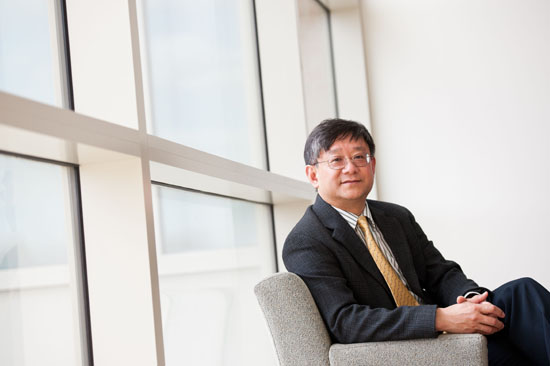 Xi-Cheng Zhang, M. Parker Givens Professor of Optics and director of the Institute of Optics at the University of Rochester.

Xi-Cheng Zhang, M. Parker Givens Professor of Optics and director of the Institute of Optics at the University of Rochester, has been named a Fellow of the American Association for the Advancement of Science (AAAS). Election as a AAAS Fellow is an honor bestowed upon AAAS members by their peers.

Zhang was named a AAAS fellow for distinguished contributions to the generation and detection of broadband terahertz waves, particularly for free-space electro-optic sampling and terahertz air photonics with femtosecond lasers.

Terahertz waves occupy the section of the electromagnetic spectrum between the infrared and microwave bands. Zhang believes that fundamental research on terahertz waves will have an impact in many scientific areas, beyond its historical uses in the astronomy and the laser fusion communities. Research in Zhang's group includes applying terahertz technology to study cultural artifacts, such as frescos and ceramic pots, and also to monitor the possible presence of explosive materials from a distance.

This year 388 members have been awarded this honor by AAAS because of their scientifically or socially distinguished efforts to advance science or its applications. New Fellows will be presented with an official certificate and a gold and blue (representing science and engineering, respectively) rosette pin on Saturday, 15 February at the 2014 AAAS Annual Meeting in Chicago.

Zhang has received some 30 honors and awards during his career, most recently the Kenneth Button Prize from the International Society of Infrared, Millimeter and Terahertz Waves and the William Streifer Scientific Achievement Award from the IEEE (Institute of Electrical and Electronics Engineers) Photonics Society in recognition of his innovative work in the field of lasers and electro-optics.

He joined the University as the director of the Institute of Optics on Jan 1, 2012. He had previously been the founding director of the Center for Terahertz Research at Rensselaer Polytechnic Institute, RPI, since 1991. Before joining RPI in 1991, Zhang was a guest scientist at MIT, a research physicist at the Amoco Research Center and a research scientist at Columbia University. He has also held professorships at the Huazhong University of Science and Technology, and at eight different universities and institutes in China.

Zhang graduated from Peking University in 1982 with a degree in physics and received his Ph.D., also in physics, from Brown University, in 1986. He has been awarded 28 US patents and has authored and co-authored 23 books and book chapters and 300 refereed papers.

This year's AAAS Fellows will be formally announced in the AAAS News & Notes section of the journal Science on 29 November 2013.

The tradition of AAAS Fellows began in 1874. Currently, members can be considered for the rank of Fellow if nominated by the steering groups of the Association's 24 sections, or by any three Fellows who are current AAAS members (so long as two of the three sponsors are not affiliated with the nominee's institution), or by the AAAS chief executive officer. Fellows must have been continuous members of AAAS for four years by the end of the calendar year in which they are elected.

Each steering group reviews the nominations of individuals within its respective section and a final list is forwarded to the AAAS Council, which votes on the aggregate list.

The Council is the policymaking body of the Association, chaired by the AAAS president, and consisting of the members of the board of directors, the retiring section chairs, delegates from each electorate and each regional division, and two delegates from the National Association of Academies of Science.

The American Association for the Advancement of Science (AAAS) is the world's largest general scientific society, and publisher of the journal, Science (www.sciencemag.org) as well as Science Translational Medicine (www.sciencetranslationalmedicine.org) and Science Signaling (www.sciencesignaling.org). AAAS was founded in 1848, and includes 261 affiliated societies and academies of science, serving 10 million individuals. Science has the largest paid circulation of any peer-reviewed general science journal in the world, with an estimated total readership of 1 million. The non-profit AAAS (www.aaas.org) is open to all and fulfills its mission to "advance science and serve society" through initiatives in science policy, international programs, science education, and more. For the latest research news, log onto EurekAlert!, www.eurekalert.org, the premier science-news Web site, a service of AAAS.