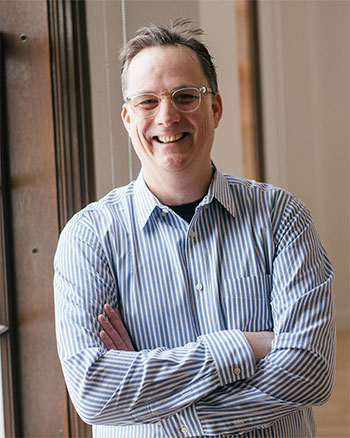 Nigel Maister, artistic director of the International Theatre Program at the University of Rochester, was installed as the inaugural holder of the Russell and Ruth Peck Artistic Directorship on Friday, February 28.

"Nigel exemplifies the talent and ingenuity that Russell and Ruth Peck have brought to the University, enriching the lives of thousands of students over the past 53 years," said University President Joel Seligman. "Through the generosity of donors such as Janice and Joe Willett, we are able to attract talented students whose passions include theater."

Born in South Africa, Maister has trained as an actor and director and has a master of fine arts from Carnegie Mellon University. His most recent and noteworthy productions include Joël Pommerat's Cinderella, Peter Handke's The Hour We Knew Nothing of Each Other, and Michael John Lachiusa's Hello Again. He also is a founding member and resident theatre director of the music group Alarm Will Sound, and the New York Theatre Workshop "Usual Suspect."

"To be named the Russell and Ruth Peck Artistic Director is an honor and the most wonderful tribute to a couple who share an unparalleled passion for the theatre and who have inspired generations of students in their discovery of this performing art," said Maister.

Pointing to his multimedia adaption of The Iliad, translation of Bernard-Marie Koltès's Roberto Zucco, and world première of Andy Bragen's The Hairy Dutchman, Peck said that Maister has a tremendous ability to identify interesting productions and bring them to life in unusual ways."I've never known a director who has such a powerful impact on students. He provides them with a greater sense of the possibilities of themselves and of theater," he said.

Janice Willett agreed. "Nigel is tremendously talented and his enthusiasm is boundless, but perhaps his greatest gift is his ability to let the students take ownership of their work," said Willett, who was introduced to Maister through the Pecks. "This is a well-deserved honor for him."

In addition to establishing the new directorship, the Willetts have created the Russell Peck Fellowship in English, to support fellowships in the Department of English, with a preference for graduate students in medieval studies.

"Especially now, when support for the arts is under fire, it is important to recognize the importance of the liberal arts and to make sure they receive the funding they deserve," said Willett. "When you meet people like Russell and Ruth, who are so committed to their respective fields of study, and to each other, you realize how critically important it is to support people with unique talents so they can pass along their knowledge to others."

A prolific author and scholar of medieval studies, Peck has been the faculty director of the Medieval House (now the Medieval Society) and the Plutzik Poetry Series, as well as the Drama House and its theater program. He championed the Consortium for the Teaching of the Middle Ages project and its Middle English Text Series which, now in its 80th volume, has transformed the way medieval literature is studied on college campuses around the world. For 23 years, Peck and his wife directed the University's Theatre in England program, which offers students a two-week intensive study of theater during winter break.

Like the position they endowed, the Willetts have pursued multiple fields in their own lives. Joseph Willett is retired from Merrill Lynch and Co., Inc. where he served as CFO for six years and COO of Merrill's European region for four years. Janice Willett, currently a freelance editor, most recently served as an editor for The Boston Consulting Group and has served as a senior lecturer in business communications at Simon. She is a member of the University of Rochester Board of Trustees and the Simon Business School National Council, and is chair of Simon's portion of The Meliora Challenge.

Together, the Willetts are members of the Simon School Executive Advisory Committee, co-chairs of the Northern New Jersey Regional Cabinet, and recipients of the inaugural Simon School Dean's Medal in 2008, which recognizes extraordinary service, philanthropy, and leadership to the school, and dedication and commitment that inspire others to take leadership roles at the University. They also are members of the George Eastman Circle, the University's leadership annual giving society. In addition to the Peck directorship, they have endowed the Janice M. and Joseph T. Willett Professorship for Teaching and Service at Simon.