Aman has learned from jazz legends, worked with civil rights icons, and led an esteemed legal and academic career

University Life Trustee Fred Aman started playing drums at the age of four and has never stopped. Along the way, he’s learned from jazz legends, recorded with his own bands, and has applied lessons learned from music into his long and accomplished legal and academic career. He’s held faculty positions and research fellowships at many universities and institutions around the world.* Last year, he retired from Maurer School of Law at Indiana University-Bloomington where he was the dean from 1991-2002, and, today, is its Roscoe C. O’Byrne Professor of Law, Emeritus. 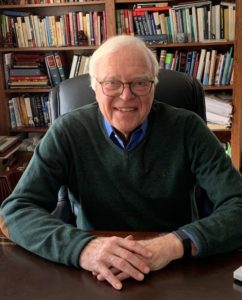 My parents and I lived in an apartment on the top floor of my grandparents’ house, which was just off Hudson Avenue in Rochester. At that time, our neighborhood was populated by people from Eastern Europe; most spoke Polish, and some spoke Russian, Lithuanian, and an array of dialects. My grandparents were from Poland, but they taught themselves how to read, write, and speak English, which is the only language they spoke to me. It is entirely possible that my later interests in global issues, particularly transnational law, may have taken root then. Law came later, of course, but I grew up thinking of a diversity of cultures, languages, and origins as normal to a thriving community.

My grandfather also taught himself to play the piano, accordion, and the violin. My uncle was studying drums at the time. For a long time, I thought that every family in America was just like ours and had a full drum set in the middle of the living room.

Your drumming lessons with the jazz great, Cozy Cole

There was a generous man in our neighborhood who annually took a few youngsters to New York City, usually different kids each time. For all of us, this meant a lot of firsts. We flew on a plane, stayed in a hotel, went to a Yankees game, and seeing the city, our eyes opened up to the world beyond our neighborhoods.

Our host knew Cozy Cole, a great jazz drummer who played with legends like Louis Armstrong and Cab Calloway. Knowing about my own interest in drums, he arranged for me to meet Cozy at the Metropole Cafe, a popular club where Cozy often played. I learned he had a school of drumming in New York and I certainly wanted to take lessons from him.

Enter my Aunt Helen. She promised that if Cozy agreed to the lessons, which he did, she’d take me to New York City for the lessons. So, several times a year, we’d take the Friday midnight train from Rochester to Manhattan. I’d have a three-hour lesson with Cozy, go to the Metropole to hear him play a set, and then we’d take the midnight train back. It was a wonderful experience in every way.

Your time at Rochester.

I was the first in my family to go to college and I soaked in all the lectures and new ideas. I learned from some of the best faculty members, like legendary political scientists Richard Fenno and William Riker. Through their classes and support, I became interested in the law. They showed me—as did the many other teachers in my life—that being a great teacher had a lot to do with being kind and helpful and not taking a heavy-handed approach. I also played a lot of gigs back then, too. The fraternities would call on me and my quintet when they wanted a “smooth” sound at their parties.

Your experience with the Rhodes Scholarship.

Professor Riker encouraged me to apply for a Rhodes Scholarship. The University’s president, W. Allen Wallis, was the chair of the selection committee so I ended up interviewing with him and others for it. A few weeks after learning I didn’t get it, he sent me a handwritten note (which my parents ended up framing) inviting me to make an appointment to see him. We met and did many times thereafter. He often gave me great advice and ended up becoming a wonderful mentor to me for many years. I’ve never forgotten the kindness this university president showed to a young undergraduate–a lesson I kept with me in my own efforts as a law school dean.

Your time as a trustee.

I became a member of the Trustees Council in the 1970s. Later, I was elected an alumni trustee and still later became a life trustee. These experiences provided me great insight into how a well-run university operates. This has been very helpful to me, especially as I shifted from practicing law to teaching and to taking on academic leadership roles.

Your summer as an arranger at Eastman. 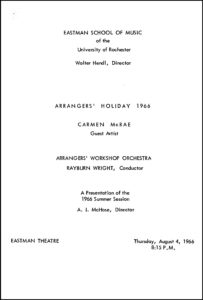 Program guide for the 1966 Arranger’s Holiday

Ray Wright, head arranger at Radio City Music Hall, taught a very challenging and rewarding class called the Arrangers’ Workshop. While taking the class, I wrote an arrangement that was played at the Arranger’s Holiday concert that year. Carmen McCrae, a famous jazz singer, was the featured artist and performed at a nearly sold-out audience at Eastman theater. That was a huge thrill for me.

Wright was a wonderful teacher and was very artful in the way he would critique us. He’d record our compositions in class and then the next day, he’d review them with us. In his kind and gentle way, he would hit the pause button to say things like, “Right here, where did this come from?” or “Why this chord and not this one?” or “Why give this to the trumpets instead of the saxophones?” I learned so much from him–about arranging but also about teaching, and what it means to think a problem through.

In 1970, when I was just out of law school, I went to work for Judge Elbert P. Tuttle in Atlanta. He was one of the great judges on the Fifth Circuit Court of Appeals and was instrumental in deciding and writing many early cases addressing racial discrimination coming out of the Deep South. His approach and dedication to equity, fairness, and justice helped me see the positive impact that a legal career could make on people’s lives.

I met Carol during that time, too. She was doing post graduate work in anthropology at that time. I remember asking Judge Tuttle if he’d marry us. In response, he said, “You know, there aren’t many things you can ask an 80-year-old to do for the first time, but this is one of them.” He married us and we’ve been together for almost 45 years.

Your approach to both law and music.

The two aren’t nearly as different as some might think. I enjoy merging the worlds of theory and practice, in both law and music. Often, people think that music is all about feeling, but there is more structure in it than they realize. You have to learn technique and theory to excel. As my piano teacher would occasionally tell me, “otherwise you risk wasting your finest feelings on the wrong notes.”

Similarly, there’s a lot more feeling in the law than people think. You have to consider the human dimensions of most of the cases, what justice may require in various contexts, and how the law applies to an intricate set of facts and situations. In my law teaching and in my administrative roles, I’ve tried to develop these ideas.

I have a number of writing and music projects in the works. I’m drafting the fourth edition of a treatise I wrote on administrative law as well as starting a new book on Administrative Law and Democracy. I’m also in a jazz trio and we are working on our seventh non–commercial CD. I continue to play the drums as often as I can and I listen to a lot of music, particularly piano trios and people like Bill Charlap, Chick Corea, Keith Jarrett, Fred Hersch, Renee Rosnes, Miki Yamanaka, and others.

Listen to some of Fred Aman’s music

Topsy Part II was a big hit for Cozy Cole, a historically important drummer during the swing era. It was also a hugely influential piece for Fred Aman, who took lessons from the jazz legend when he was a kid. “This recording of Topsy was my attempt to honor Cozy by playing one of his most famous tunes,” says Aman. “Cozy would always have the whole room swinging and dancing. He would take a simple pattern, masterfully embellish it, and tell a beautiful story in the process.” This version features Fred Aman on drums, Bill Sabol on piano, and Jerry Gleason on bass. It was recorded on their non-commercial album, Carol’s Song.

Aman arranged “Yesterdays” (by Jerome Kern) for the Arranger’s Holiday held in 1966. The Arranger’s Holidays were the traditional concluding events at the weeklong Arranger’s Workshops that met annually at Eastman from 1959 until 1990. Each Arranger’s Holiday was recorded for archiving, and the list of names of those who appeared as guest artists is a veritable Who’s Who of the jazz world: Duke Ellington, Dave Brubeck, Chick Corea, Marilyn McPartland, and others.

Aman and his original trio perform “All Blues,” one of the jazz classics of all time. The trio–with Carey Joseph on bass and Bill Sabol on piano–formed in 1979 when Aman taught at the Cornell Law School. Aman and Sabol continue to play together to this day. This tune is featured on their non-commercial album, Ithaca.

The University of Rochester recently launched Together for Rochester, a yearlong fundraising and engagement campaign designed to make life better for the University community and the world—just like Fred Aman has done throughout his life. Learn more about the campaign here.