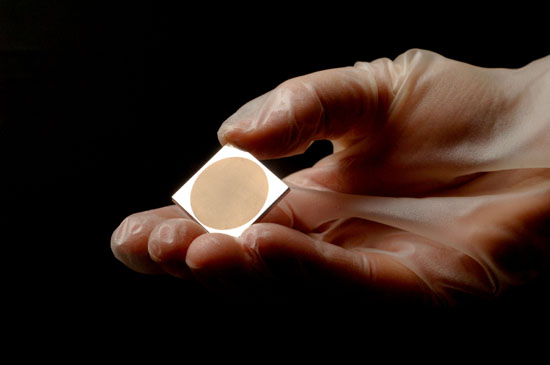 And blue. And gray. And many other colors. And it works for every metal tested, including platinum, titanium, tungsten, silver, and gold. 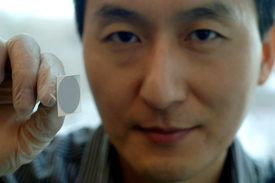 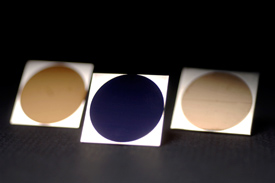 Chunlei Guo, the researcher who a year ago used intense laser light to alter the properties of a variety of metals to render them pitch black, has pushed the same process further in a paper in today's Applied Physics Letters. He now believes it's possible to alter the properties of any metal to turn it any coloreven multi-colored iridescence like a butterfly's wings.

Since the process changes the intrinsic surface properties of the metal itself and is not just a coating, the color won't fade or peel, says Guo, associate professor of optics at the Institute of Optics at the University of Rochester. He suggests the possibilities are endlessa cycle factory using a single laser to produce bicycles of different colors; etching a full-color photograph of a family into the refrigerator door; or proposing with a gold engagement ring that matches your fiancée's blue eyes.

"Since the discovery of the black metal we've been determined to get full control on getting metals to reflect only a certain color and absorb the rest, and now we finally can make a metal reflect almost any color we wish," says Guo. "When we first found the process that produced a gold color, we couldn't believe it. We worked in the lab until midnight trying to figure out what other colors we could make."

Guo and his assistant, Anatoliy Vorobeyv, use an incredibly brief but incredibly intense laser burst that changes the surface of a metal, forming nanoscale and microscale structures that selectively reflect a certain color to give the appearance of a specific color or combinations of colors.

The metal-coloring research follows up on Guo's breakthrough "black metal" discovery in late 2006, when his research team was able to create nanostructures on metal surfaces that absorbed virtually all light, making something as simple as regular aluminum into one of the darkest materials ever created.

Guo's black metal, with its very high absorption properties, is ideal for any application where capturing light is desirable. The potential applications range from making better solar energy collectors, to more advanced stealth technology, he says. The ultra-brief/ultra-intense light Guo uses is produced by a femtosecond laser, which produces pulses lasting only a few quadrillionths of a second. A femtosecond is to a second what a second is to about 32 million years. During its brief burst, Guo's laser unleashes as much power as the entire electric grid of North America does, all focused onto a spot the size of a needlepoint.

The intense blast forces the surface of the metal to form nanostructurespits, globules, and strands that response incoming light in different ways depending on the way the laser pulse sculpted the structures. Since the structures are smaller than the wavelength of light, the way they reflect light is highly dependent upon their specific size and shape, says Guo. Varying the laser intensity, pulse length, and number of pulses, allows Guo to control the configuration of the nanostructures, and hence control what color the metal reflects.

Guo and Vorobyev also achieve the iridescent coloring by creating microscale lines covered with nanostructures. The lines, arranged in regular rows, cause reflected light of different wavelengths to interfere differently in different directions. The result is a piece of metal that can appear solid purple from one direction, and gray from another, or multiple colors all at once.

To alter an area of metal the size of a dime currently takes 30 minutes or more, but the researchers are working on refining the technique. Fortunately, despite the incredible intensity involved, the femtosecond laser can be powered by a simple wall outlet, meaning that when the process is refined, implementing it should be relatively simple.

The new process has worked on every metal Guo has tried, and the results are so consistent that he believes it will work for every metal known. His team is currently working to find the right tuning to create the rest of the rainbow for the solid-colored metal, including red and green.

MSNBC
Scientists alter the colors of many metals
(February 11, 2008)