Alcor, One-Half of the First Known Binary Star System, Has Its Own Surprise Star Companion

In ancient times, people with exceptional vision discovered that one of the brightest stars in the Big Dipper was, in fact, two stars so close together that most people cannot distinguish them. The two stars, Alcor and Mizar, were the first binary starsa pair of stars that orbit each otherever known.

Modern telescopes have since found that Mizar is itself a pair of binaries, revealing what was once thought of as a single star to be four stars orbiting each other. Alcor has been sometimes considered a 5th member of the system, orbiting far away from the Mizar quadruplet.

Now, an astronomer at the University of Rochester and his colleagues have made the surprise discovery that Alcor is also actually two stars, and is apparently gravitationally bound to the Mizar system, making the whole group a sextuplet. This would make the Mizar-Alcor sextuplet the 2nd nearest such system known. The discovery is especially surprising because Alcor is one of the most studied stars in the sky.

"Finding that Alcor had a stellar companion was a bit of serendipity," says Eric Mamajek, assistant professor of physics and astronomy at the University of Rochester, and leader of the team that found the star. "We were trying a new method of planet hunting and instead of finding a planet orbiting Alcor, we found a star."

Mamajek says that a separate group of scientists, led by Ben Oppenheimer of the American Natural History Museum, has also just found that the Alcor companion is physically associated with the star.

That group has also recorded a rough spectrum of the star, which Mamajek says confirms his prediction that the companion is a cool and dim M-class dwarf star.

Mamajek and colleagues at the University of Arizona used the Multiple Mirror Telescope in Arizona, which has a secondary mirror capable of flexing slightly to compensate for the twinkling the Earth's atmosphere normally imparts to starlight. With the clearest images he could obtain of nearby stars, Mamajek's team used computer algorithms to remove as much glare as possible from the image of a star in the hopes of spotting a planet near the star. Planets are so much dimmer than their parent stars that spotting one is like trying to discern a firefly next to a spotlight from several miles away, says Mamajek.

Though Mamajek was unable to find any planets in the first group of stars he surveyed, he did stumble across the tiny star hidden in the glare of Alcor. Not only did Mamajek's project reveal the image of the star, but its presence was able to explain slight deviations in movement that scientists had noticed in Alcor. In addition, Mamajek estimates that the small companion star is likely a third as massive as our sun, and explains why astronomers have detected unexpectedly high levels of X-rays coming from Alcordwarf stars naturally radiate high levels of X-rays.

"It's pretty exciting to have found a companion to this particular star," says Mamajek. "Alcor and Mizar weren't just the first known binariesthe four stars that were once thought to be the single Mizar were discovered in lots of 'firsts' throughout history."

Benedetto Castelli, Galileo's protégé and collaborator, saw Mizar A and B as separate stars with a telescope, and Galileo observed it a week after hearing about them from Castelli, and noted it in his notebooks in 1617, says Mamajek. Those two stars, called Mizar A and Mizar B, together with Alcor, in 1857 became the first binary stars ever photographed through a telescope. In 1890, Mizar A was discovered to itself be a binary, being the first binary to be discovered using spectroscopy. In 1908, spectroscopy revealed that Mizar B was also a pair of stars, making the group the first-known quintuple star system.

Mamajek says some astronomers have raised the question of whether Alcor is truly a part of the system made up of the Mizar group of stars because Alcor's motion isn't what scientists would expect it to be if it were gravitationally connected to the Mizar group. Mamajek says that indeed Alcor is part of the same system, and that the influence of Alcor's newly discovered companion is partly responsible for Alcor's unexpected motion.

Mamajek is continuing his efforts to find planets around nearby stars, but his attention is not completely off Alcor and Mizar. "You see how the disk of Alcor B doesn't seem perfectly round?" says Mamajek, pointing toward an image of Alcor and its new companion. "Some of us have a feeling that Alcor might actually have another surprise in store for us."

More on “First Known Binary Star is Discovered to be a Triplet, Quadruplet, Quintuplet, Sextuplet System” 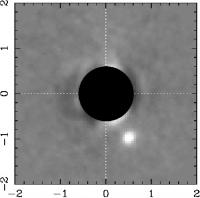