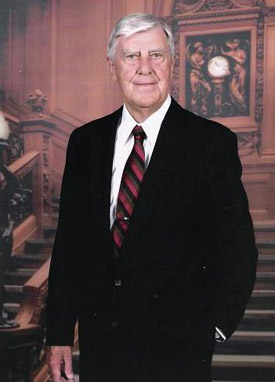 John R. Huizenga, Tracy H. Harris Professor Emeritus of Chemistry and Physics at the University of Rochester and an internationally recognized leader in the field of nuclear science, died last Saturday in La Jolla, Calif. He was 92.

The U.S. Department of Energy appointed Huizenga co-chair of its Advisory Board Cold Fusion Panel in 1989 to investigate the claims of electrochemists Stanley Pons and Martin Fleischmann that they had produced excess heat in a laboratory experiment that could only be attributed to nuclear processes. Huizenga's panel concluded that there was no convincing evidence to support the claims of achieving cold fusion.

Robert K. Boeckman, Jr., past chair of the University's Department of Chemistry, once called Huizenga "an ardent and vocal champion of quality science and the integrity of the scientific enterprise."

Huizenga's interest in nuclear science was fueled by his work on the Manhattan Project in Oak Ridge, Tenn., shortly after earning his undergraduate degree in mathematics and chemistry at Calvin College in Grand Rapids, Mich. He earned his Ph.D. in physical chemistry at the University of Illinois in 1949 and immediately afterwards held joint appointments at Chicago and Argonne National Laboratory, where he studied nuclear reaction processes with an emphasis on the production and study of transuranium nuclei.

At Argonne, Huizenga was part of a team of researchers that examined the residue from the 1952 detonation of the hydrogen bomb "Big Mike" on Enewetak Atoll in the Pacific Ocean. Based on their analysis of concentrated neutron flux around the detonation site, two elements were added to the periodic table99 (einsteinium) and 100 (fermium).

Robert Vandenbosch, professor emeritus of chemistry at the University of Washington, worked with Huizenga for six years at the Argonne National laboratory. "John was an excellent colleague and mentor," said Vandenbosch. "He had an excellent ability to identify new areas for investigation, but also encouraged his collaborators to explore other ideas."

Huizenga came to the University of Rochester in 1967 as a professor of chemistry and physics, serving five years as chair of the Department of Chemistry starting in 1983. Using the University's new Emperor Tandem Van de Graaff Accelerator, he began a systematic study of the excited states of actinide (radioactive metal) nuclei by high resolution reaction spectroscopy.

"Throughout his 50-year scientific career, John Huizenga conducted research at the forefront of nuclear physics and contributed a host of exceptional insights to nuclear science and technology which stimulated vigorous research then and are still valid today," said Wolf-Udo Schrӧder, professor of chemistry and physics at the University of Rochester who considered Huizenga to be a mentor. "John took particular pride in having mentored numerous students and young investigators now teaching at great universities around the world. His former students and associates, in turn, have expressed their appreciation with several scientific symposia held in John's honor."

Huizenga received numerous fellowships and awards during his long career, including a Fulbright Fellowship (1954-55), two Guggenheim Fellowships (1964-65 and 1973-74), the Department of Energy's E. O. Lawrence Memorial Award (1966), the American Chemical Society's Glenn T. Seaborg Award (1975), Calvin College's Distinguished Alumni Award (1975) and the Leroy Randle Grumman Medal for Outstanding Scientific Achievement (1991). Huizenga was a member of the National Academy of Sciences and the American Chemical Society, and a Fellow of the American Academy of Arts and Sciences, the American Physical Society and the American Association for the Advancement of Science. He is the author of Cold Fusion: the Scientific Fiasco of the Century, his scientific auto-biography Five Decades of Research in Nuclear Science, and co-author (with Robert Vandenbosch) of Nuclear Fission and Damped Nuclear Reactions (with Udo Schröder).

Schrӧder says the book Nuclear Fission "remains a standard for its thorough review of the nuclear fission process."