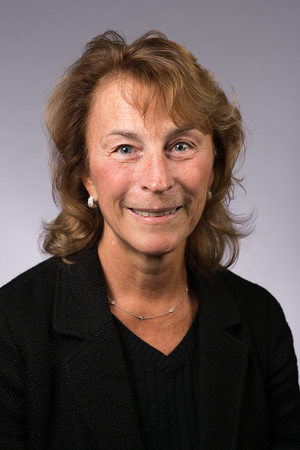 For more than four decades, Jane Possee has served as a role model to female athletes at the University of Rochester, encouraging them to achieve excellence both on and off the field. On Saturday, Feb. 8, she will be recognized for these efforts and more as she receives the University's Susan B. Anthony Lifetime Achievement Award.

"We are proud to honor Jane for helping change the landscape for female athletes on our campus and for supporting and guiding countless student athletes over the years," said Catherine Cerulli, director of the Susan B. Anthony Center for Women's Leadership.

Originally hired to coach the Yellowjackets women's basketball and field hockey, Possee also started the University's women's lacrosse team. After the introduction of Title IX, a 1972 federal law that increased opportunities for female players, Possee was able to help provide additional opportunities to female athletes including a daily practice schedule, use of the alumni gym, and full-time coaches.

"She helped set the standard to which all of our female coaches and support staff aspire," wrote George VanderZwaag, director of Athletics and Recreation at Rochester, noting that throughout her tenure at Rochester, "she has developed positive relationships and worked with all factions of our University."

In 1992, Possee transitioned from coaching to administration where she currently oversees the operation of the Robert B. Goergen Athletic Center and all the recreational programs sponsored by the Department of Athletics and Recreation. According to Possee, this job gives her the opportunity to "work with a wide spectrum of students and student athletes who I've been able to watch excel both on the field and in the workforce."

A graduate of Skidmore College and Syracuse University, her many achievements include the 2008 Goergen Award for Distinguished Contributions to Undergraduate Learning. She also has served on the board of directors of the Genesee Waterways Center. Possee is the 13th woman to receive the Susan B. Anthony Lifetime Achievement Award. Prior recipients include Nora Bredes, former New York legislator and past director of the Susan B. Anthony Center for Women's Leadership, and Esther Conwell '45, winner of the 2010 National Medal of Science.

The award will be given at the Susan B. Anthony Legacy dinner, a long-standing University tradition that celebrates Anthony's campaign for equal rights and to win women admission in the University in 1900. This year's keynote address will be given by Jane Dubin '78, '79 (MS), a University alumna and TONY Award winning producer whose productions include Ann and Peter and the Starcatcher.

Seven undergraduate students will also receive awards and scholarships at this year's event. The Sue S. Stewart Leadership and Community Service Award will be given to Anisha Gundewar of Rochester, N.Y., a senior majoring in health, behavior and society as well as microbiology. This award was created last year in honor of Sue S. Stewart, former senior vice president and general counsel at the University for her dedication to women's issues and commitment to the local community. The Dean Ruth A. Merrill Award will be given to Anjalene Whittier of North Bethesda, M.D., a senior majoring in psychology. This year's Susan B. Anthony Scholarships will be awarded to Crystal Hans of Kenmore, N.Y., a junior majoring in English, and Tanatchaya Chanphanitpornkit of East Brunswick, N.J., a junior majoring in applied music (double bass) and music education.

The Susan B. Anthony Prize will be awarded to Elizabeth Riedman of Canandaigua, N.Y., a senior majoring in anthropology and religion. The Jane R. Plitt award will be given to Brianna Isaacson of Fairport, N.Y, a senior majoring in health, behavior, and society. Receiving the Fannie Bigelow Prize is Fatima Bawany of Rochester, N.Y., a junior majoring in religion and biology. The prizes and scholarships are given each year by the University of Rochester Women's Club. For more information about this year's event call (585) 275-8799 or visit www.rochester.edu/SBA/.