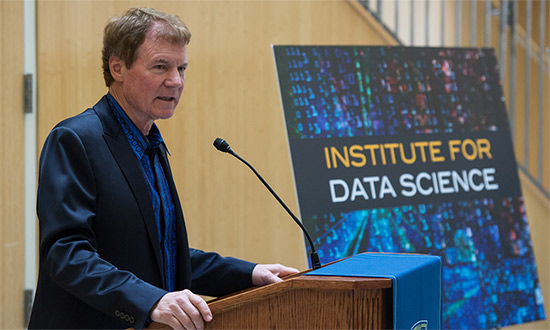 Today, University of Rochester President Joel Seligman announced two extraordinary gifts from The Wegman Family Charitable Foundation (WFCF): a $10 million lead gift to the University's Institute for Data Science and a $7 million gift to support the Golisano Children's Hospital. Together with previous gifts to several programs across the University campuses, today's announcement brings to $20 million the WFCF's total contributions to the University's comprehensive campaign. In recognition of this support for the Institute for Data Science, the Institute's new landmark building will bear the Wegmans name.

"It is our honor to support the University's campaign," said Danny Wegman, the Foundation's president and chairman of the board. "The Institute for Data Science is helping the University and its collaborators become leaders in leveraging information in ways that will transform 21st-century discovery and innovation.

"In a similar way, the new children's hospital will move health care for our region's children and their families into a whole new environment designed around children's needs. What could be more important or gratifying than ensuring the health of our children?"

The Institute for Data Science and the Golisano Children's Hospital campaign are flagships of the $1.2 billion goal for The Meliora Challenge: The Campaign for the University of Rochester. The WFCF gift represents the fourth largest contribution to the University's comprehensive campaign, and the second largest gift to the children's hospital.

"Data science is the defining discipline of the 21st century, and among the University's top priorities," said University of Rochester President Joel Seligman. "Danny saw the potential of this initiative to build off of our strengths in data science and computational capabilities and our long tradition of entrepreneurship. He also knew a gift to the new Golisano Children's Hospital would be an investment in our region's future. Both of these gifts will further deepen the Wegman legacy in upstate New York."

This past fall, Seligman announced the University's $100 million commitmentinclusive of the $50 million it has invested in recent yearsto greatly expand its work in data science, the rapidly emerging field focused on how the world understands, consumes, and applies vast quantities of information and data. As the centerpiece of the University's current five-year strategic plan, the Data Science Initiative features the creation of a new Institute for Data Science and includes the construction of a state-of-the-art building to house it, as well as support for as many as 20 new faculty members with expertise in the field.

The proposed $25 million, 50,000-square-foot facility will complete the Science & Engineering Quadrangle on the River Campus, and will bring togetherunder one rooffaculty in medicine, science and engineering, the humanities, education, business and other disciplines for the purpose of data science research and studies. This new facility will also serve as the home for the recently designated New York State Center of Excellence for Data Science, which with support from Governor Andrew Cuomo and our New York State delegation, received $872,333 in the 2014-15 Budget.

"The Institute for Data Science is uniting our institutional strengths in this area for this first time, including research being conducted at the Health Science Center for Computational Innovation (home to the IBM Blue Gene/Q supercomputer), computer science, biostatistics, and other disciplines where data informs discovery," said Robert L. Clark, senior vice president for research and dean of the Hajim School of Engineering & Applied Sciences. "Our contributions in data science are already having a profound impact on research in fields ranging from political science to medicine, and The Wegman Family Charitable Foundation's support for the institute is enabling in our efforts to make the University of Rochester a world leader in this emergent field."

UR Medicine's new $145 million children's hospital features 52 private patient rooms, a greatly expanded Neonatal Intensive Care Unit, and various spaces designed specifically to meet the needs of children and their families. Some of the new spaces families will be able to enjoy include a healing garden, family lounges, and a hospitality suite where parents can shower, prepare and eat home-cooked meals as a family, or even run a load of laundry.

"The Wegman family has done immeasurable good in Rochester, providing thousands of jobs to its residents, giving scholarships for city children to attend private schools, and helping us all live healthier lives," said URMC CEO Bradford C. Berk, M.D., Ph.D. "We are immensely grateful to the Foundation for continuing the legacy of supporting our region's children through this generous gift to the children's hospital."

"The Foundation's gift brings patient- and family-centered care one step closer to reality for our region's youngsters," said Nina F. Schor, M.D., Ph.D., pediatrician-in-chief of Golisano Children's Hospital and the William H. Eilinger Chair of Pediatrics. "Enhancements to the configuration of patients' rooms and their increased proximity to charting stations will make it easier to include families in the care process. It also allows us to immerse our doctors-in-training into all aspects of care and develop more skilled providers."

The new hospital, which is the largest capital project in the University's history, is slated to open in the summer of 2015. To date, the community and donors, such as The Wegman Family Charitable Foundation and B. Thomas Golisano, have generously supported the hospital construction, giving $45 million of the $60 million that must be raised for the building. Wegman, honorary chair of the Medical Center campaign, hopes this gift inspires others to contribute to close the $15 million fundraising gap needed for the new building.

The Wegman Family Charitable Foundation (The Foundation), a charity headquartered in Rochester, New York, was created by Robert Wegman in 1991 and is funded by assets from his estate. The Foundation's areas of focus are health care, education, workforce development and United Way. The Foundation does not accept grant applications.