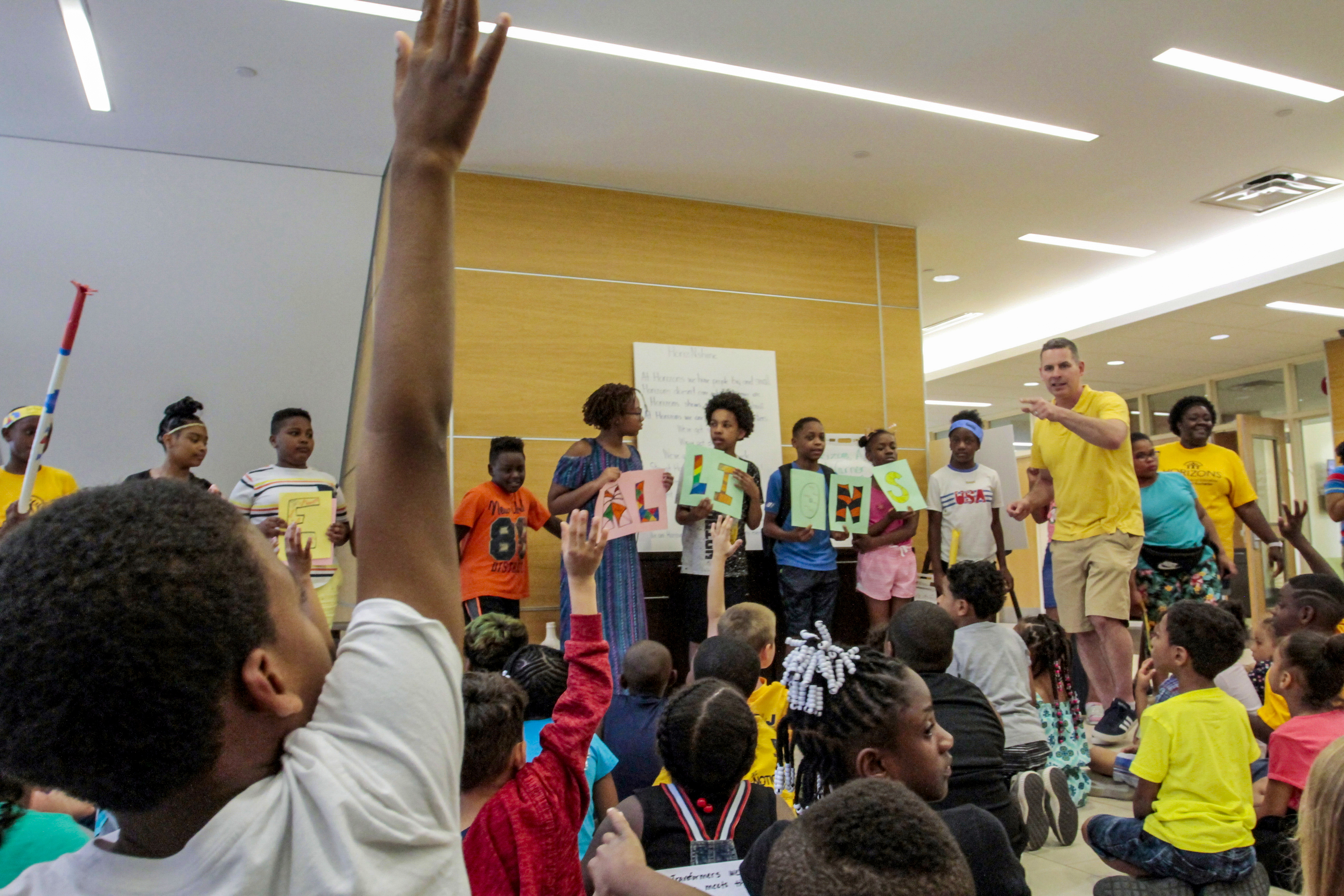 How long have you been teaching?

“I’m going on 23 years, I had five in the city, and just finished my 18th in Penfield. It goes by really fast!”

What’s your favorite part about working in the program?

“What I really like, especially about this program, is the theme and workshop time. I like mixing it up, getting different kids. I like the workshop one because it ties to your own interests and hobbies. Like I’ve done instruments every year. I have a bunch of guitars back there.

I do like the balance of campus school though. It’s got a lot of school parts, but at the same time you gotta make it not like school.”

If you could add or remove anything from the program what would it be?

“The counseling, for some kids who really [need it]. I don’t know how much access they had to it, but I think for teachers as well, to just kind of talk to someone that has more knowledge in things and maybe give them strategies to work with a child who is presenting with ADHD or some kind of spectrum type thing. I think it’s always good and then they can even talk to Julia about it or even reach out to parents.

I mean that would be something I would add. There’s nothing I would really change. I think the day is a good day, long day, but it goes quick. The beginning is always a little rough. But then once workshops, team groups to swimming starts the weeks just go by fast, boom, boom, boom, boom. “

What do you think is the most impactful thing Horizons does for the community?

“I don’t know if this impacts the community, but, it gets kids…who probably would never be on a college campus or see a college campus, to be on a college campus and kind of see that as a possibility for their future where they might not have role models in their family. So, I think that kind of helps the school community give these kids as that direction, say, ‘Hey, you can come here or another college. This is what you need to do.’

So maybe that helps impact the, the, the community. That way it gives the kids a vision of where they could go, what they could do with their life if they choose to.”

What is your favorite story about your time with Horizons?

“We were walking along the river for a scavenger hunt, and so we’re walking along and then a cyclist is coming down and so we get the whole class to move over to the right. One young person in the back wasn’t paying attention and started running around the line, not looking in the right direction and the cyclist stopped and when I called out this person’s name and they stopped too late and ran right into the front tire of this person’s bike.

He was ok, it was an interesting conversation with the parent, but I think it helped pull the group together. Everybody was watching and the poor woman’s like, ‘I’m so sorry.’ I was like, ‘absolutely not. He ran into your bike he should be apologizing to you.’ And he was like, ‘I’m sorry.’ So, the students here, we have a good joke, we laugh about it. I mostly remember the times we laugh.”

What is your favorite part of the day at Horizons?

“Workshops and theme groups, the switching and getting different kids get them to know different. So then as they come up you sort of already built a little a rapport with them. But also getting to see other students you’ve worked with in the past coming in and hanging out with you and telling you they wish they in here again.

This summer was a good summer, I think it was a good transfer with Julia. As the kids get older, they keep [her] positivity with them.”