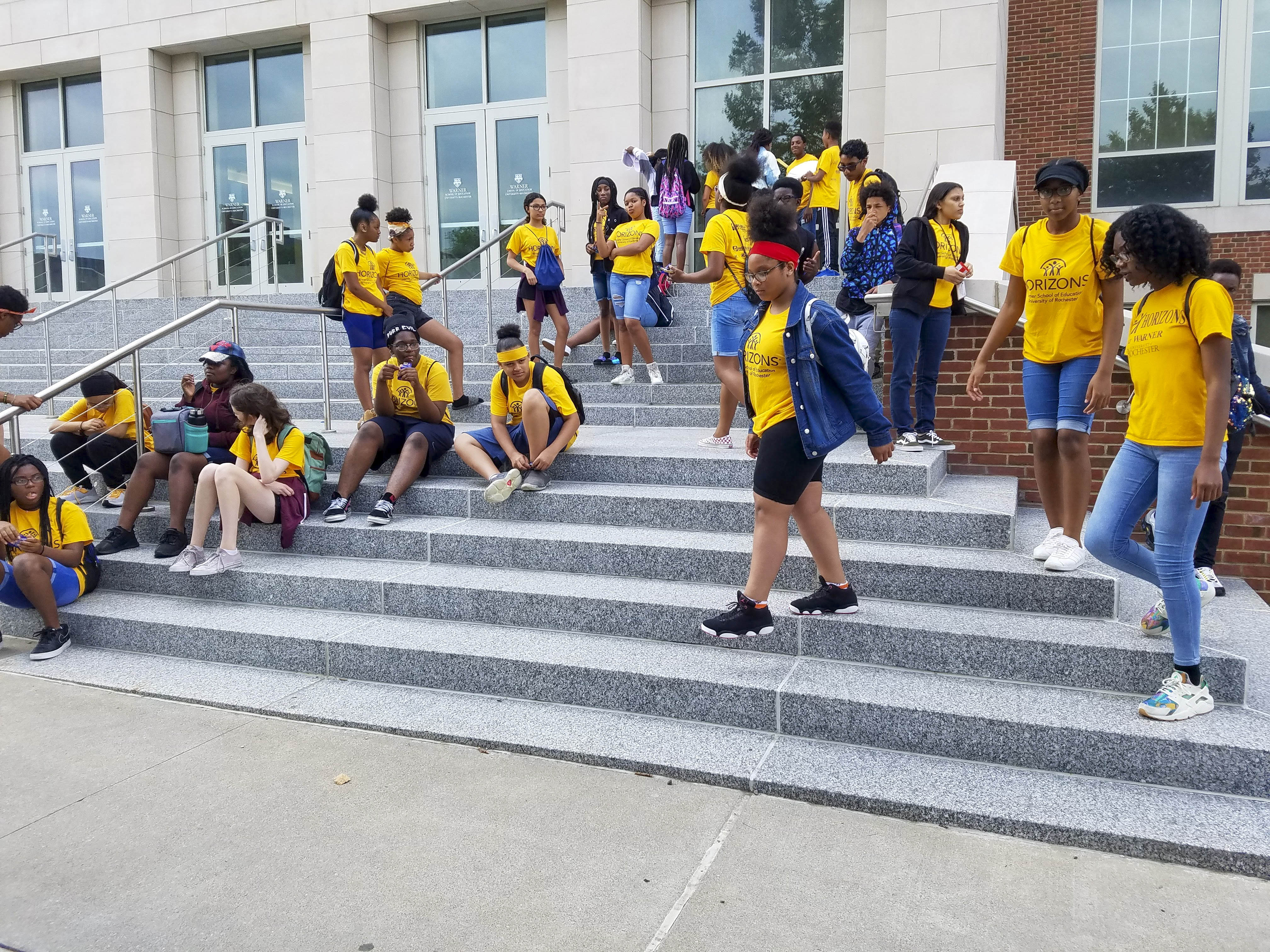 Amy is the lead teacher of our 6th grade class for the 2019 program.

So how long have you been teaching?

I’m going into my eighth year of teaching. When I first started teaching I was an intervention teacher, so I had first grade through sixth grade.

What is an intervention teacher?

Intervention looked different depending on the school and what they want you to do. So when I was at School 43, I worked on skills that the teacher directed me to do, whether it was ELA or math or sometimes both. It was kind of like I was trying to fill in the gaps of the deficits that the kids really needed a boost on. When I went to School 33, it was a little different. I did first grade through third grade for half the year, and then I did four through six for the second half of the year.
I did a lot of their assessments. Like I would do STAR testing for the kids or for the first graders, I would do their ABC’s and letter sound assessments. It was more focused on ELA, my interventions at 33, so it was more of a literacy intervention position.

How long have you been with Horizons?

How did you discover the Horizons program?

One of the teachers at 33 who I’ve been friends with for years is a supervisor for Encompass. She got an email from Julia [Horizons at Warner’s Executive Director] and she couldn’t take the position at Encompass or at Horizons. So she emailed me because I also do Encompass’s afterschool program throughout the year.

And what attracted you to the Horizons program?

I liked the fact that there was swimming and that the kids were able to be out in the communities on Friday for their field trips. I liked that it wasn’t just educational base, it was also providing the kids more enrichment with social and emotional development. And I liked the fact that if I needed to bring my daughter I could and next year she can join the program, which is really nice.

What is your favorite thing so far?

What has been your biggest struggle so far?

I think the biggest struggle has been trying to make sure that I’m planning and giving the kids work that they’ll be invested in. It’s hard because it’s summer so it’s hard to engage them in academics because all they want to do is play games and be outside. I’ve been trying really hard to make sure the things that I plan are really engaging for them.

Is there anything you would add, remove, or change about the program?

I would change workshops and theme groups to only being an hour instead of an hour and a half. I think it’s a little too long of a time for them. I would actually like more of that half an hour block to be more in here with my class and to be doing more like hands on science stuff with them.

What is the most impactful thing Horizons does for the community?

I think the most impactful thing is making kids feel safe and comfortable, developing relationships, with staff and other kids. When we go out for field trips you notice that the kids all really love each other and get along. There’s no fighting, the kids are very kind in this program. That’s one thing that’s very different from other programs I’ve been in, that the kids are just so it’s like a family. It’s like that summer camp that they go to and they see all their old friends and they feel at home here because it’s a returning program.

What is your favorite story about the program?

My favorite story is when we went to Letchworth and some of my kids were super crazy about the bugs. So I took a piece of long grass and I snuck up behind some of the boys and I was putting it in their ears and they were freaking out. Femi was like, “I’m calling my mom, I can’t do this!” and then Zavi put his hood over his head and they were like, “Oh my God, all these bugs!” Then at the end they realized that was just me and they were dying like, “Miss Amy, I can’t believe it was you this whole time!” So now it’s kind of like a running joke.

What is your favorite part of the Horizons day?

My favorite part of the day I think is our circle time. Every morning when the kids come in we all gather in a circle, we do our reminders or announcements for the day, then we have a talking stick and we pass it around. Usually on Mondays we talk about what we did for the weekend, it changes throughout the week. We had some heavy conversation this morning, talking about what was going on in the news this past weekend. And that comes with after being with them for a while, you can’t do that right off the bat. It’s nice towards the end of the program because you get really close to the kids and they all feel really comfortable. And it’s funny if you saw the difference between our circle in the beginning to our circle now, it’s much different feeling. It’s nice to see that, that they feel comfortable in our group and in our circle really.