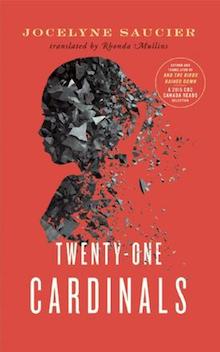 Jocelyne Saucier’s Twenty-One Cardinals is about the type of unique, indestructible, and often tragic loyalty only found in families. For a brief but stunningly mesmerizing 169 pages, Twenty-One Cardinals invited me in to the haunting and intimate world of the Cardinal family, and left me wishing I could stay for more. With its elegiac prose and sensitively developed characters, the novel is an original, emotionally potent, and heartbreakingly real exploration of the forces that bind and break families.

In addition to Saucier’s nuanced portrayal of a unique family dynamic, the inventiveness of her various characters and settings kept me constantly intrigued. The Cardinals are a fierce and feral clan of twenty-one siblings who grew up together in Norco, a now desolate and poverty-stricken mining town in Quebec. Norco was built on the short-lived prosperity of a zinc mine discovered by their obsessive and elusive prospector father; in the original, instigating tragedy of the family, he would never see an ounce of the wealth that came from his discovery, an event that would spiral into the family’s demise. As a consequence of this underlying anger, the siblings grew up united in a war against anyone outside their exclusive, isolated family: for most of their childhoods, it was Cardinals against the rest of the world. They despised the outsiders that profited from the mine and ridiculed any sign of weakness within their own ranks. The Caboose, the youngest boy, romanticizes his family’s history more than anyone (but also knows the least of its secrets):

There are plenty of parts of our story that I can’t tell. People are too narrow-minded to accept such a lust for life. We don’t belong to the same species. We never wanted their lives, and I can see in their eyes that our defiance sends them scurrying back to their doghouses the second a particularly Cardinal episode comes up. Over the years, I have figured out which things are most remarkable, and I don’t pour it on any thicker. I stick close to what’s deemed acceptable.

With fire and dynamite as their weapons of choice, they were an intrepid, scrappy tribe of child bandits, terrorizing the town, mercilessly tough on each other but unconditionally united. The Neverland that Saucier creates as the Cardinal children’s domain is as interesting and imaginative as the rough-and-tumble camaraderie of the siblings themselves:

I was five, maybe six, and the town seemed to go on forever. Yet I simply had to stand on the sheet metal roof of the dynamite shed, which we would slide down winter and summer, and I could see the entire expanse of it. From the disused fire station that gleamed white in the sun (it was built just before the mine closed) to the flimsy hovels scattered along the forest’s edge, there were three large, square, grassy plots of land and, lost in the desolation, a few houses in ruins or well on their way. It was the same when you looked along the other axis: space, tall grass, grey asphalt roads full of potholes, a few forsaken buildings and, just about anywhere you looked, the mounds left by houses that had been transported elsewhere: the cement foundations, the sagging sheds, the body of a car that didn’t want to follow. And sometimes, lo and behold, a smart, tidy house cultivating flowers and hubris. Like the Potvins’, which had once been the city hall. Just two children. The son was going to college, the daughter to convent, and their mother played the organ at church. Rich people we cheerfully despised.

The novel actually takes place years later, though, once the “golden age” of the Cardinal children has passed, and their clan has grown up and all but dissolved. For the first time in years, the entire adult family is reunited, forcing them to come to terms with an event that has haunted them all for decades: their involvement with (and as we learn more, perhaps responsibility for) the mysterious disappearance of one of their own.

Each chapter is told from the perspective of a different sibling, consisting of introspective, intimate monologues and memories from several members of the family. The novel owes much of its suspense, mystery, and thought-provoking ambiguity to this multi-perspectival form. The fragments of the Cardinal family’s unusual past are pieced together through these accumulating shards of memory and knowledge: their story cannot be fully told by any one member, and the troubled past that poisons the family can only be resolved through bringing together the combination of secrets, big and small, that all of them keep. It is immensely satisfying how Saucier strategically unfurls the details of the Cardinal saga through the lenses of the different “generations” of its children; from the oldest child, Émilien with perhaps the most perspective, having had the full view of the family history, to the youngest, The Caboose, who, in his worshiping naïveté relishes the romanticized stories of the Cardinal children’s peak years. It is fascinating to see how the Cardinal children’s lives have diverged, and how they have each dealt with the aftermath of their former life together—they are scattered around the world, all living in drastically different ways. Each glimpse into these lives yields a depth and investment in the characters that is remarkable for the brief chapters they inhabit; I often found myself wishing that I could dive even deeper, linger a little longer, in each of their divergent worlds.

Saucier’s melancholy family mystery has a natural flow and an intimate, dream-like atmosphere that kept me reading, hypnotized, to the end. It was intriguing to read along as the Cardinals literally put together the pieces of a former life that often seems too surreal to be true. I loved how, on so many levels, this novel approached the simultaneous strength and weakness in the inescapability of family bonds; even living their separate adult lives, decades later, the Cardinals cannot avoid the pull that brings them all together to confront their once-shared lives. It is this same inescapability that leads to so many of the family’s tragedies, yet also some of the tender and vulnerable moments they share. Offered an opportunity by a wealthy family to get an education and participate in the “finer” parts of life, Angèle, (the sister who disappeared) was mercilessly teased and tormented by her siblings. Nicknamed “The Foster Child,” she was a misfit in her gentle nature, but she always returned to her siblings: “The keys to the world were handed to her with all the honors due to the first class. Why would she agree to leave that peaceful world for the den of the deranged, who started quarreling over the scraps of her soul as soon as she set foot in the house?” Her simple, perfect answer, and a summary of Saucier’s powerful message: “‘Family is an encounter with the deepest parts of your soul.’”