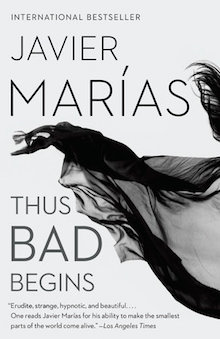 Following The Infatuations, Javier Marías’s latest novel seems, like those that have preceded it, an experiment to test fiction’s capacity to mesmerize with sombre-sexy atmospheres and ruminative elongated sentences stretched across windowless walls of paragraphs. Thus Bad Begins offers his customary ethical tangles and astute mulling over human behavior. At its most fluid, the reader drifts through the familiar density and detours in something like an intrigued torpor.

The focal point is the uneasy marriage of Eduardo Muriel and Beatriz Noguera. Juan de Vere, the narrator, is looking back on the period when, in his first job as an assistant to Eduardo, a well-known film director, he lived in the former maid’s quarters of the couple’s apartment. He was drawn to them, they relied on him, and this configuration made him a privileged voyeur. Provoked by rambling conversations with Eduardo and the titillating episodes of spying and eavesdropping Marías luxuriates in, de Vere wrestled to understand their union that was marred by unkindness and physical rejection on the part of Eduardo. This puzzling lack of intimacy appeared to stem from a perceived betrayal. Furthermore, Eduardo had entrusted de Vere with the mission of getting close to the shady, lecherous Van Vechten, family doctor and friend, to evaluate whether he could have behaved in an “indecent manner” toward women. To say more of the plot might spoil its teasingly deferred revelations, and in Marías seductive teasing is much of the point.

This is one of his most overtly “Spanish” books, its “tenuous . . . story” of a marriage set insistently within the frame of Madrid circa 1980. This was the time of the Movida, a countercultural movement and scene that emerged energetically in the capital in the wake of Franco’s rule of almost forty years—though it had been brewing and starting to manifest even before the dictator’s death in 1975. The city was heady with “permissiveness and freedoms,” vigorous nightlife (“no one slept in those years,” an impression you might still have there today), supposed sexual liberation, and the playful anarchic energy of artists such as Pedro Almodóvar. However, as Marías emphasizes, shadows lingered. Crimes and suspicions were being silenced, personal histories rewritten, cleansed of collusion with the old repressive regime. The new democracy was accompanied by a political decision (“the pact of forgetting”) reflecting a controversial but broadly upheld general conviction that it was better to avoid seeking retribution for wrongs perpetrated under the regime, as this would have caused chaos. Legal divorce was impending but not yet an option, and this is stressed, with the implications for both genders empathically considered. The novel feels both soaked with patriarchy and—at least intermittently—concerned with its particular oppression of women.

Marías’s fiction has invoked Shakespeare on several occasions and Thus Bad Begins lifts its title from Hamlet. The extended quote from Act III, scene iv, “Thus bad begins and worse remains behind” is interpreted for de Vere by Muriel as describing the need to renounce at knowing what cannot really be known and thereby move on. (He seems to take the line against the common reading, to mean that the worst is in the past—rather than yet in store.) We are left wondering about the implications of Muriel’s philosophy both for history and personal relationships. Marías returns repeatedly to the phrase, a technique he favors for building cumulative resonance and suggesting shifting shades of meaning. He is engagingly preoccupied with the rhythmic and chameleonic properties of language.

Musing on Hitchcock’s films, de Vere reflects that only a gaze is required to produce suspense; watching itself is dramatic. Perhaps, but especially when the watching is piquantly colored with mystery, desire and death. Marías is as exquisitely conscious of this as Hitchcock was, yet plentiful doses of all three don’t prove as consistently absorbing here as they did in novels such as Tomorrow in the Battle Think on Me. Marías’s prose often has a hypothetical aura, a sense of the exercise of modeling a possible reality. This is of course inherent to fiction, and can effectively be latent or more explicit. While in Thus Bad Begins Marías brings his usual virtuosic meticulousness to the exercise, I found my awareness of it a little distancing, the protracted conjecture and penchant for aphorisms sometimes cumbersome and emotionally flat. The use of _Hamlet_—though the works do both brood on hard-to-credit mortality via characters enmeshed in their own psychological webs—seemed a somewhat mechanical device for injecting passion.

This said, emotional distance or a certain flatness of affect is frequently apposite and subtly explored in Marías’s novels, which are very impressively substantial with ideas and moody mood. Alienation snakes through them, accompaniment to the recurring perception that reality is unreal. More broadly, he is fascinated by the potential for art and life to intersect, and the impossible task of cleanly demarcating the two. And always emerging persuasively from his prose is the haunting notion that consciousness is a roundabout, cryptic story we tell ourselves.