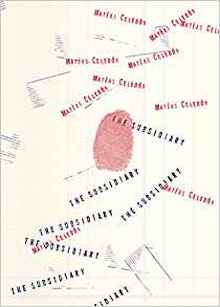 The biggest issues with books like The Subsidiary often have to do with their underpinnings—when we learn that Georges Perec wrote La Disparition without once using the letter E, we are impressed. Imagine such a task! It takes a high level of commitment and talent to pull that off. But I’m going to be very honest here: I’ve never thought that book was as good as the story of how it was written. No disrespect to Perec; his book is astounding, but I’ll likely remember the craft long after I’ve forgotten the story.

The Subsidiary could have easily become a book where the form is more impressive than the content. The author, Matías Celedón, composed the book using a set of office stamps purchased at a library sale in Santiago, Chile. The stamps allow for moveable type, though restrict the author to only a few lines of text per page. The book, beautifully published by Melville House, reproduces the hand-stamped pages, lending the novella a sort of authenticity, as if the pages are directly taken from an office. And the story Celedón creates is of a nightmare, albeit a fragmentary one, that asks the reader to fill in the blanks. The nightmare is one of senseless oppression married to bureaucracy, which readers may easily see as commentary on Chile’s time under the rule of Pinochet. But these formal concerns—the stamps, the political commentary—do not detract from the effect of the words on paper. The pages are simple and clean, but they communicate a very believable terror.

The story: an everyday office is plunged into a power outage, one initiated by the management itself. Employees are forced to remain at their workstations for hours during the outage. The subsidiary announces that it “TAKES NO RESPONSIBILITY FOR DAMAGE OR THEFT WITHIN THE PREMISES.” The exits are closed. All communication is cut off. From there, the workers wade through tedium that soon leads to brutality. The Subsidiary raises questions, none of which Celedón feels compelled to answer overtly. In this manner, the book is oddly compelling, fusing the text and the reader’s co-creation to bring about a singular reading experience. The limitations of the form give the pages a haunting emptiness and it is in this void that reader may find deeper fears. The bureaucratic reporting on, and filing away of, violence is too great a reality. There may be nothing more chilling than government reports that sap oppression of its blood; The Subsidiary conjures the sort of cold, tight language that has often been employed in documenting subjugation, which is what allows the book to rise from a writing exercise and become something infinitely more substantial. The suggestion of violence may often do a better job of expressing horror than labored descriptions, and in that sense, The Subsidiary uses the perfect form to convey its larger concerns. The constraint succeeds; the work is chilling. This is a book that functions as a more complete work of art: literary and visual at once, sparse and evocative.