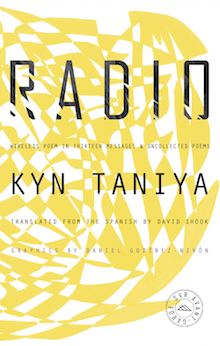 Prose translators will likely disagree, but I believe translating poetry requires a significant level of talent, a commitment to the text, and near mania, all of which suggests that the undertaking is the greatest possible challenge. The task is to take a form of writing known for its discipline, its strict forms, rhymes, and meanings suggested through language and render it into a second tongue. It’s inevitable that something will be lost in the process of translation. Prose might survive such a transformation (it may even benefit from it), but poetry is wounded each time it’s translated. I don’t speak Italian, but I know for sure that I’m missing something when I read Dante in English.

Perhaps this is why so much of the poetry in translation I come across seems to fall into the free verse, avant-garde category. One need not fret over how to turn a rhyme from a language like Spanish—a language that allows for easy rhyming—into English when the original doesn’t rhyme. Iambic pentameter from French to English could be rough, but if the French poem doesn’t adhere to a rigid pattern, so much the better for the translator.

That being the case, the free verse poems had better be good. That’s significant pressure on the integrity of the work. A mediocre but clever work in one language can easily fall flat when presented in another. Cultural quirks or idioms might carry an otherwise slight poem, but, robbed of these strengths via translation, the work is ineffective.

Of course, this being a fool’s errand, it is inherently worth doing. Why not try to climb Everest? And it stands to reason that poetry translations are often published with the original nearby so the dedicated reader can at least compare the two versions, even if they have no skill with the original language. Read Vicente Huidobro in Spanish—even if you just sound out the words without understanding them, you’ll grasp some musicality sacrificed by translation. The hope is that committed readers will take the time to approach poetry in translation differently than translated prose. Poetry, being language at its apex, deserves the effort.

This is a long way of stating that the book, Radio: Wireless Poem in Thirteen Messages by Kyn Taniya (born Luis Quintanilla) is worth your attention. Published by Cardboard House Press in a slim volume, Radio is something to observe, an artifact from a not-so long ago era (1924) when lines like “The full moon anesthetized all the gardens / and in the romantic night / a nude woman spills tears of orange-flower water” connected with readers, a time when the “avant-garde” was as engaging as it was baffling.

Kyn Taniya is concerned with movement, from page to page, poem to poem; from the interior to the external; from generation to generation of his native Mexico where “YOU HAVE TO STAND ON YOUR TIPTOES AND KISS THE SUN ON THE MOUTH.” As bizarre as this may sound out of context (or, frankly, in context), savvy readers might see a connection to the celebrated eccentricities of Russian Futurist Vladimir Mayakovsky, who spoke, in poetry, to the sun, not to mention the supposedly genre-shaking Frank O’Hara, who riffed off of the Russians. Kyn Taniya is not consciously aligning himself with these writers (his work predates O’Hara’s) but his work is every bit as experimental as theirs, and often more touching. The contemporary avant-garde—too concerned with pushing boundaries—has demonstrated a lack of concern with the tactile beauty of surrealism, but Kyn Taniya never loses physicality in his poems, even when they verge on the uncomfortable:

It is easy to see how generations have run with lines like these and used them as permission to discuss whatever they regard as shocking, though with the sole intent to shock. Kyn Taniya—perhaps protected by his era—was the poet as observer, turning his vision into something above common diction, something strange. These lines conjure everything written since then, all of the poor imitations that we’ve grown accustomed to, so much so that the most shocking thing a poet can do in the year 2016 is write a sonnet. But it would be wrong to look at a work like this—a “cult classic of the Mexican avant-garde” according to the back cover—through the lens of current poetry. The avant-garde has too long being the sanctuary for facile experiments. But one can imagine Mexican readers, seduced by the surreal, responding to Radio in a way that feels alien to a contemporary audience. Radio has merits, which reside mostly in the play of language, though this linguistic somersaulting may not be appealing to jaded readers long done with Apollinaire and Breton.

While this is very debatable (close examination offers much to the attentive reader), the language is evocative and playful, never better than in the bonus work “Stadium,” written “in anticipation of the 1928 Olympics in Amsterdam,” and the sensual, call-and-response poem, “All of Her.” These poems alone should delight poetry readers regardless of their affiliations.

There’s likely something missing in the Spanish-to-English translation, not to mention the time that has passed since Radio was written, but if one believes (as I do) that the reader’s job is to find her way into the text, then issues regarding fidelity shouldn’t be a concern. Kyn Taniya has done his job by providing puzzles, emotions, exaltations, and lamentations. Visit with them and you may find yourself somewhere in the jumble between his world and your own.