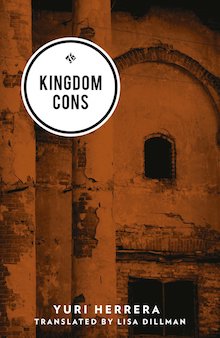 Yuri Herrera is overwhelming in the way that he sucks readers into his worlds, transporting them to a borderland that is at once mythical in its construction and powerfully recognizable as a reflection of its modern-day counterpart. Kingdom Cons, originally published in Spanish in 2004 and translated by Lisa Dillman, is Herrera’s third novel to be published in English (though the first he wrote in Spanish) and it completes his loosely-connected triptych of border novels. In his other novels, Signs Preceding the End of the World (2015) and The Transmigration of Bodies (2016), Herrera tackles the experience of crossing the border, the conflicts between crime families, and the effects of disease within the context of the US/Mexico border. Taking on the upper echelons of narco-culture in this text, Kingdom Cons examines the possibilities of language, artistic creation, and the construction of power in a way that feels staggeringly contemporary and necessary.

Herrera’s writing can perhaps best be characterized by the ways that he blends myth and reality. In Kingdom Cons, a drug lord becomes a King, his cartel is depicted as his court, and his palatial residence is transformed into his kingdom. This structure can partly be explained by the author’s writing approach; in an interview published in “Latin American Literature Today”: http://www.latinamericanliteraturetoday.org/en/2017/april/literature-political-responsibility-interview-yuri-herrera-radmila-stefkova-and-rodrigo, Herrera explains that he writes lists of words that he will not use (such as Mexico, United States, border, drugs, and narco-trafficking) as a way of avoiding clichés, but this also means that his writing takes on a more mythical feeling as it is distanced from the specific culture depicted. While it clearly engages with the genre, Kingdom Cons is not a narco-novela because of this approach and the underlying critique of narco-culture that is embedded in the novel.

The novel is told from the perspective of Lobo, or the Artist, who makes his way into the court by composing and singing songs—or narcocorridos, as they are commonly known—about the grandeur of the King and his court. Also referred to as Songbird, he is an artist-figure navigating a world of crime and violence. He plays and records his songs and the recordings are sold on the streets—“After all, isn’t that the way we do business?” muses the king—and this circulation contributes to the construction of the King’s grandeur. With roots in Spanish romances, the corrido is a traditional Mexican musical form that typically narrates historical events and functions as a primary means of circulating information and news before the advent of radio and television. Narcocorridos draw on these same traditions, but they engage with narco-culture. As can be seen in the novel, this music is banned from public spaces, such as the radio, in an attempt to suppress narco-culture, but they nevertheless have a significant function within these societies as they create and circulate the narratives that legitimize the authority of those in power.

In the novel, the Artist is quickly incorporated into the kingdom because of his ballads, becoming visible to the rest of the community when he is needed to compose or perform. In the meantime, he almost invisibly moves through the kingdom, learning the secrets hidden there and getting involved in a somewhat predictable illicit affair. As the kingdom begins to collapse and the Artist returns to the world he previously occupied and witnesses another kingdom where all he can see is that “it was all the same,” he begins to understand that he has become a part of a system that makes an individual all-powerful, but that he still maintains agency within this system: “Who was the King? An all powerful. A ray of light who had lit up the margins because it couldn’t be any other way as long as it wasn’t revealed what he was. A sad sack, a man betrayed. A single drop in the sea of men with stories. A man with no power over the terse fabric inside the artist’s head.”

For me, the plot and characters of Kingdom Cons are not as compelling as those I found in Signs Preceding the End of the World, which does mark a greater maturity on the writer’s part, but the beauty and importance of this novel resides more in the underlying questioning of power and the narrative itself. Herrera’s inventive use of language is well-matched by Dillman’s own linguistic artistry, leading to a staggeringly beautiful piece of writing. The narrative itself feels like it comes from another time, creating resonances with medieval Spanish literature or the music of the early twentieth-century United States. There is something subversively jazzy about the pace, improvised words, sparsity, and marginality of the narrative that is reminiscent of the Beat writers. For example, there is a heavy use of verbs, some of which are invented, which gives the novel a greater sense of agitated movement, such as in the following example: “The man backed up and cactus-armed in fear.” Dillman skillfully adapts Herrera’s creative use of language into the English—a challenge that she discusses in her Translator’s Note in _Signs Preceding the End of the World_—by using similar techniques to play with the sounds of the language and the images that it conjures. As an example of this, Dillman renders lush imagery while also paying particular attention to the repetition of certain sounds in the following passage: “He heard tell of mountains, of jungles, of gulfs, of summits, in singsong accents entirely new to him: yesses like shesses, words with no esses, some whose tone soared up so high and sank so low it seemed each sentence was a journey: it was clear they were from nowhere near here.”

Language, however, is not just an adornment in the novel, but something that is central to the underlying questions of power. Early on there is a discussion of the Artist’s love of language and the sounds it makes: “For him school was brief, a place where he sensed the harmony of letters, the rhythms that strung them together and split them apart.” Words were, for him, an escape from the world rather than a reflection or creation of it:

He started writing songs about stuff that happened to others. He knew nothing of love but he’d heard stories, so he’d mention it amid wisdom and proverbs, give it a beat, and sell it. But it was all imitation, a mirror held up to lives overheard. And though he suspected there was more he could do with his songs, he didn’t know how to go deeper. It had all been said before. Why bother.

Once he becomes a part of the kingdom, though, the Artist’s words take on a new significance as they are used to create power and to construct reality. Herrera’s words, on the other hand, reflect a certain reality as his novel demonstrates the ways that power can be systematically created through language in a way that is just as believable in the underground crime world as it is in the contemporary political scene.