“Lost in Translation: An Illustrated Compendium of Untranslatable Words from Around the World” by Ella Frances Sanders 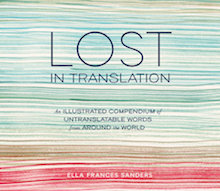 Lost in Translation: An Illustrated Compendium of Untranslatable Words from Around the World by Ella Frances Sanders
112 pgs. | hc | 9781607747109 | $14.99
Ten Speed Press
Reviewed by Kaija Straumanis

Hello and greetings in the 2017 holiday season!

For those of you still looking for something to gift a friend or family member this winter season, or if you’re on the lookout for something to gift in the future, or even if you’re looking for something small and fun to gift to yourself—and especially if you want to break the ice in terms of the topic of translation (maybe you’re still trying to get your family on-board with your affection for translated literature and languages, either as a career or a reading preference? maybe it’ll be easier than getting them to accept your middle-aged jam-band aspirations or that questionable tattoo idea you still believe is representative of who you really are?) I wanted to take a quick moment to recommend something I myself was recently gifted: Lost in Translation: An Illustrated Compendium of Untranslatable Words from Around the World.

As a translator, it’s often that I find myself in a group of translator friends in which someone brings up an “untranslatable” word in a language he or she is working from. Just a few days ago, for me, this was the Latvian word “drēgns,” which a dictionary will decipher as “damp,” “cold,” “clammy,” or “chilly“—when in fact, it’s all of these words at the same time, and then some. It’s the type of cold, damp, seep-into-your-bones autumn or winter rainy weather that chills you to your very core and sticks around for a while even after you’ve made it to warmer surroundings. One word doesn’t do it justice; it’s so much more than just that one word.

Ella Frances Sanders’s Lost in Translation is a little coffee-table type book that explores just these kids of words from various languages across the globe. Complete with fun and colorful illustrations, a “summary” of the respective word’s meaning, and a definition thereof, the book is a great way to show off the intricacies, difficulties, and even beauties of what it takes and means to translate from one language to another. It’s, like, Translation 101 Lite™. Just enough to intrigue any non-translation-mined reader, but not too heavy or scary to make them scream and run to hide as if the thing had just turned into a snake, or a (seasonally appropriate) fruit cake. (Which I’ll never understand because fruit cake is AMAZING, especially after my grandmother cuts it up and drizzles a teaspoon of brandy over each slice.)

Sure, there are a few nit-picky things about the book itself—it would have been nice to have a pronuncuation guide for each word, to make an effort to keep any one language from be represented more than once (Sanders gets some pretty damn unknown [to me at least] languages and dialects in here, like Nguni Bantu, but there are so many Japanese, German, and Swedish words represented), and maybe being more careful with the grammatical categorization of these words (while it is explained whether the word is a noun/adjective/verb in its original language, the English definition often has to stray from the original categorization in order to explain what the word means—the Hindi noun “jugaad” is then defined as “n. Ensuring that things happen even with minimal resources…” But that’s changing the noun into a verb, right? I’M SORRY I CAN’T HELP IT)—but there is plenty to enjoy and fall in love with, and it was neat to find a few words that have Latvian equivalents, or at least words as close as two foreign words can be to one another.

Two of my personal favorites from the book are the Welsh word “hiraeth”:

n. A homesickness for somewhere you cannot return to, the nostalgia and the grief for the lost places of your past, places that never were.

(because what’s more beautiful than déjà-vu mixed with melancholy?) and the Norwegian word “pålegg”:

n. Anything and everything you can put on a slice of bread.

Because SANDWICHES. Enjoy the rest of the festivities that are upon us, check out this book for yourself or a loved one (or a despised one, if you know someone more anal-retentive than me when it comes to picking apart what is supposed to be a book of joy and escapism), and season’s greetings from Open Letter!