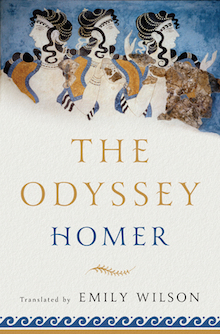 Now goddess, child of Zeus,
tell the old story for our modern times.

In literary translation of works from other eras, there are always two basic tasks that a translator needs to achieve: translating from the writer’s language into a target language, the language of the reader, and also translating from the writer’s era and culture to the era and culture of the contemporary reader. In her newest translation of Homer’s Odyssey, Emily Wilson has turned the Greek dactylic hexameter into iambic pentameter, a remarkable feat and a well-considered strategy. Her choice of iambic pentameter as the basis for a twenty-first-century translation gives us a traditional meter familiar to us from narrative verse.  Matthew Arnold famously pointed to four characteristics that are vital to a good translation of Homer: plainness, directness, rapidity, and nobleness. Wilson’s iambic translation recreates the rapidity of the original and gives the lines an epic nobleness, but one not too alien to the modern reader. Homer’s dactylic hexameters sound unusual and unnatural in English, a forced meter, as we see in H. B. Cotterill’s 1911 translation. Here are Cotterill’s lines from Book XXII when Odysseus and his son Telemachus slay Penelope’s suitors:

Weltering there in the dust and in blood lay all of the suitors.

Fallen in many and many a heap, like fishes that boatmen

On to the beach of a hollow recess in the shore, and they lie there

Heaped on the sand, all gasping in vain for the salt sea water,

While by the heat of the sun drawn forth is the life from their bodies.

Thus were lying in heaps, piled one on the other, the suitors.

He saw them fallen, all of them, so many,

lying in blood and dust, like fish hauled up

out of the dark-grey sea in fine-mesh nets;

tipped out upon the curving beach’s sand,

they gasp for water from the salty sea.

So lay the suitors, heaped across each other.

As Wilson writes in her introduction, “Homer’s music is quite different from mine, but my translation sings to its own regular and distinctive beat.”

The Odyssey has traditionally been seen as something of a continuation, or “Part B,” of the Iliad. While the surviving Greek heroes of the Iliad return to their city states from the ten-year war without lengthy detours or wanderings, Odysseus’s journey back to Ithaca takes a decade. The Iliad’s action is linear and takes place over a few weeks on the plains before Troy, while the Odyssey’s narrative is fascinatingly rich and unpredictable, reversing and moving forward in time and place as Odysseus travels—physically or in his recounted memories—through a real and supernatural bronze-age world. One of the remarkable qualities of Wilson’s translation is to bring the epic’s extraordinary diversity to the fore, making also the everyday moments of this ancient world accessible to us with all its cultural and ethnographic elements.

inside the well-built orchard, digging earth

to make it level round a tree. He wore

a dirty ragged tunic, and his leggings

had leather patches to protect from scratches.

He wore thick gloves because of thorns, and had

a cap of goatskin.

Subtle, well-translated details bring the alien culture of the Odyssey to life. We see slaves pouring water on the hands of Penelope’s suitors before the banquet, “house girls” bringing in baskets of bread, “house boys” filling wine bowls. In her introduction, Wilson points out that in her choice of slavery-related vocabulary, she has drawn an analogy with a slave-owning plantation in the ante-bellum American South, and that the analogy “is certainly not exact, but it is at least a little closer than the alternative analogies—of a Victorian stately home or a modern nightclub.” There are many small moments of everyday life: we see a swineherd cutting strips of ox-hide to make himself sandals—in his yard there are “twelve sties all next to one another, / for breeding sows, with fifty in each one.” There is Penelope’s chair that is “inlaid with whorls of ivory / and silver, crafted by Icmalius, / who had attached a footstool, all in one. / A great big fleece was laid across the chair.” There is Odysseus’ storeroom, “wide and high-roofed, piled high with gold and bronze / and clothes in chests and fragrant olive oil.” We see Helen telling her girls to spread “beds on the porch and pile on them fine rugs / of purple, and lay blankets over them, / with woolly covers on the very top.” We see Odysseus at work building a seaworthy raft:

Calypso brought a gimlet and he drilled

through every plank and fitted them together,

fixing it firm with pegs and fastenings.

As wide as when a man who knows his trade

marks out the curving hull to fit a ship,

so wide Odysseus measured out his raft.

He notched the side decks to the close-set frame

and fixed long planks along the ribs to finish.

A stylistic element of Wilson’s translation that I find particularly interesting is her approach to the formulaic elements of the Odyssey, especially the repeated epithets, such as those usually translated as “rosy-fingered dawn,” and “much-enduring, goodly Odysseus.” Translators have throughout the centuries chosen to keep the epithets intact. For instance, A.T. Murray in his influential 1919 translation (used by the online Perseus Digital Library) translates “πολύτλας δῖος Ὀδυσσεύς” every time it appears in the Odyssey, as “much-enduring, goodly Odysseus.” (Murray’s use of “goodly” is probably a deliberate malapropism, since δῖος means “godly,” or “heavenly,” an adjective for Odysseus that Murray might have found problematic.) Most translators throughout the centuries have chosen to keep the epithets in their translations wherever they appear in the original. (One marked divergence is Stephen Mitchell’s 2013 Odyssey, in which he leaves out many of the epithets.) In her fine and deep-reaching seventy-nine-page introduction Wilson discusses the importance of the Homeric epithets, whose task is to “suggest that things have an eternal, infinitely repeatable presence. Different things will happen every day, but Dawn always appears, always with rosy fingers, always early.” Her approach to the repeated epithets is to expand their meanings, using them to add a wider range of description. The thirty-three occurrences of the epithet “πολύτλας δῖος Ὀδυσσεύς,” for instance, appear in Wilson in guises such as:

One of the remarkable and very useful aspects of this new Odyssey is Wilson’s thorough introduction. It is both scholarly and readable. In her translator’s note she lays out her theories and methods of translation.