It’s the Postseason! [Welcome to October]

It’s been too long since I last posted a comprehensive update of where we are with translations this year. Which is why I spent most of today updating the Translation Database. There are probably still a number of books to be added before the year is out, but we’re getting close to having a pretty stable—and pretty accurate—set of data on 2018 translations.

So let’s dig in, see where things are at, and then preview some October titles!

Yesterday I was talking with one of our translators (hi, Will!) about the ideal month in which to bring out a particular book. He was wondering if there were particular rules to this, similar to what Hollywood does for the Oscars. Like, do more fall titles end up on year-end lists? Is there an advantage to bringing out a book early in the year, when there aren’t a lot of options? Do June books sell better than December ones?

Although I suspect Random House marketing folks have rules of thumb—or maybe even hard data—for these questions, I personally don’t. (With one exception: We were talking about a book coming out in 2020, so we’re going to avoid the fall—and election season—like the plague.) But as I was going through October and November books that I wanted to read for these weekly columns, I got completely overwhelmed. I have seven books that I want to read this month (and three that I set aside), and a stack of maybe ten or eleven for November. And that’s coming off a September in which I didn’t get to two titles that I had hoped to read. Lots of books! Where were all of these in January when I started this probably-terrible idea of trying to write about a translation a week?

Right now, there are 4,451 fiction titles in the Translation Database. (Which I entered by hand! My god how do I not have carpal tunnel yet. These posts alone should’ve broken both my wrists.) The month in which the most have been published? OCTOBER!

Assuming that there’re some underlying forces at work here that are logical and have been developed over time, it’s probably a good idea to stay away from December. Unless . . . by game theory standards, pubbing in December would basically guarantee inclusion on the LitHub and Vol. 1 Brooklyn and Words Without Borders “books to read this month” lists? Although assuming those lists lead to more than two sales but far less than one thousand, that might not make a December pub date for your lead title all that worthwhile.

(That said, there are few things that are more annoying than having your best book of the year come out a few weeks removed from the “critical darling” of the moment. As democratic as the Internet has made book discussion, there is still a very clear movement in culture to rally around a single book at a time, drowning out the conversation about most everything else coming out around that time. It’s like a power law of book conversation or something. [Note to self: Time to revisit that earlier post about a “sabermetrics for publishing.”])

What I’ve decided to do this October is to read all five Deep Vellum books coming out at this time: Öræfi: The Wasteland by Ófeigur Sigurdsson, Revenge of the Translator by Brice Matthieussent, The Imagined Land by Eduardo Berti, The Geography of Rebels by Maria Gabriela Llansol, and The Anarchist Who Shared My Name by Pablo Martín Sánchez. Given that Will Evans is pumping out so many books in such a short time, it seems like the perfect opportunity to see what one can say about a press’s overall aesthetic by reading a bunch of their titles in a row. Besides, all of these sound good!

Out of the non-Deep Vellum titles coming out this month, here are the ones that I would most love to read: 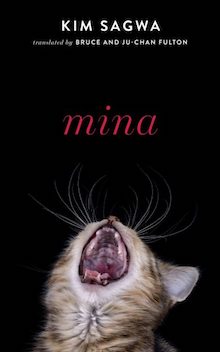 Mina by Kim Sagwa, translated from the Korean by Bruce and Ju-Chan Fulton

Toddler Hunting and Other Stories by Taeko Kono, translated from the Japanese by Lucy North

The Hole by José Revueltas, translated from the Spanish by Amanda Hopkinson

The Taiga Syndrome by Cristina Rivera Garza, translated from the Spanish by Suzanne Jill Levine

Son of Black Thursday by Alejandro Jodorowsky, translated from the Spanish by Megan McDowell

Sleep of Memory by Patrick Modiano, translated from the French by Mark Polizzotti

What’s Left of the Night by Ersi Sotiropoulos, translated from the Greek by Karen Emmerich 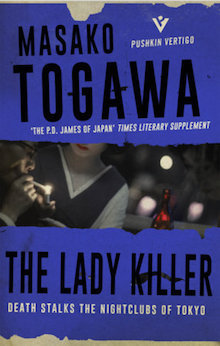 One Part Woman by Perumal Murugan, translated from the Tamil by Aniruddhan Vasudevan

The Lady Killer by Masako Togawa, translated from the Japanese by Simon Grove

Tenants & Cobwebs by Samir Naqqash, translated from the Arabic by Sadok Masliyah

Killing Commendatore by Haruki Murakami, translated from the Japanese by Philip Gabriel and Ted Goossen (everyone needs some fluff once in an while!)

Horseman of the Sands by Leonid Yuzefovich, translated from the Russian by Marian Schwartz

Second Rider by Alex Beer, translated from the German by Tim Mohr

Again, so many interesting books coming out this month. And this doesn’t even include Anniversaries by Uwe Johnson, retranslated in full by Damion Searls—the book I really wanted to read this month until I realized it would probably break me. (And wouldn’t help with my BTBA predictions.)

Back to that game theory idea: October seems like a month in which your book can easily get buried.

I doubt any of you are here to learn about which months have the “most” or “fewest” translations. You want more global numbers! 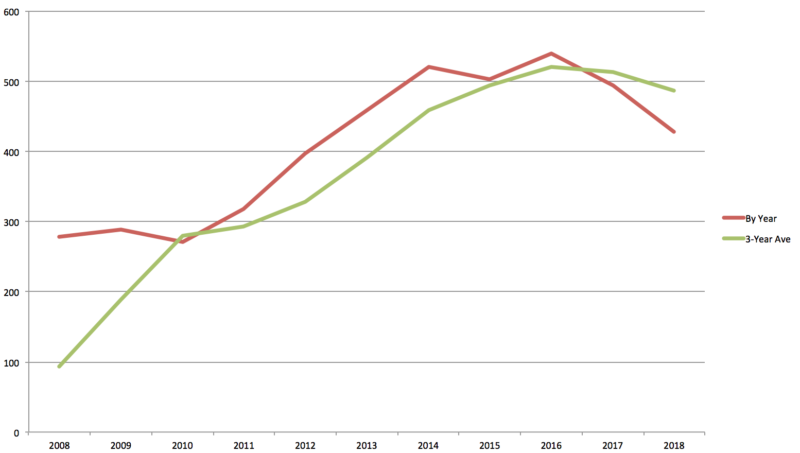 OK, let me explain the visualization then bring in the bad news. In the chart above, the red line charts the number of works of fiction in translation for each year in the Translation Database, and the green line is a three-year rolling average of those numbers.

But see how both lines sort of dive down post-2016? That’s troubling.

As I mentioned above, I don’t think 2018 is complete yet, though, so let’s just look at the numbers for publications from January through October.

Later on this year, I intend to explain this by looking at how we evaluate “success” and the impact that all of the things I’ve been writing about for the past year have led to a critical time for the sub-section of the publishing world that’s involved with literature in translation.

But that’s for later. That’s a December break, snowed in with a fifth of whiskey sort of post.

Let’s look at some other things.

I think that’s all for now. I feel like I’m short-changing this post by not including anything about the October titles I listed above, but am unlikely to have a chance to read this month. Maybe I can include shorter bits about each of them in the rest of this month’s posts on Deep Vellum’s titles . . .

One response to “It’s the Postseason! [Welcome to October]”