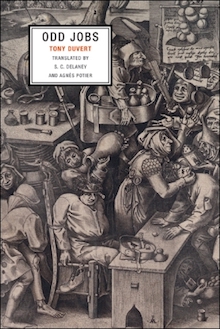 I’ve long been a fan of Wakefield Press, ever since I first read Pataphysical Essays by René Daumal, though I don’t get to read nearly as many of their titles as I would like. Do you guys also have a press whose overall aesthetic and output you just like? I mean, I of course love what Open Letter does (biased!) but if I’d have to choose another press, Wakefield would be at the top of my list. They’re just rad.

Moving on. Tony Duvert’s Odd Jobs is the most recent title I can add to my “read” (and “2018”) shelves, both at home and on Goodreads—and though it’s another one of those titles that I didn’t quite “understand,” this one I actually enjoyed reading, even considering the parts that made me squeamish (which, oddly, did not include the job that includes skinning children alive for their pelts).

Odd Jobs is a quick read, but chock-full of disturbing and often black-humor detail about a list of “odd jobs” that serve the inhabitants of an imaginary French village. The jobs, which range from “snot-remover” to “wiper” to “snowman” (so sad), lay out the “grotesque small-town occupations that defined a once reliable, now presumably vanished way of life.” Remember what life was like before smart phones? Before aloe vera and menthol-infused facial tissues? I do, though barely, but these odd jobs certainly make you not only relieved to live in a real world where people can wipe their own asses (generally speaking), and certainly happy to live in a time that is not (yet) a Margaret Atwoodian novel come true. Though, as mentioned, some of the jobs are funnier than others, and even seem to serve an actual purpose (that reminds me of Mercè Rodoreda’s Death in Spring in some ways!). Here’s one of the odd jobs that I found the least disturbing but most entertaining:

THE WINDOW-BREAKER
_____
It would sometimes happen that a wife, suffocated by her marriage, became crankier than usual. If it was a day that the window-breaker passed by, all would be well.
This man, boyish and grinning, would enter with his provision of rocks; he’d tell you a few jokes; playfully give your tush a little smack; and then, moving by turns from one room in the house to the next, he’d calmly break all the windows, shards falling and glittering outside.
The din would draw out the gossips, make children run off and husbands tremble: these were good days. Next, the woman in crisis would go off to stay with a neighbor, remaining as long as it took for new windowpanes to be set in their frames.
One would come across then, in the village, a number of houses whose broken windows had never been repaired. This was the method men and children had found to be free of certain women, leaving themselves, back at home, in a draft to catch cold.

For a short read that gives you what I believe is a taste of what Wakefield is all about, Odd Jobs is a good one to pick up and look through, though some jobs and descriptions may be disturbing to some. But based on the author bio, this is the exact effect Duvert was going for.


Previous post
Two Month Review #6.1: “The Book of Disquiet” with Declan Spring
Next post
It’s the Postseason! [Welcome to October]