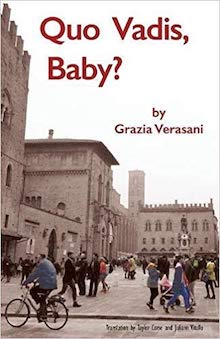 The last time I wrote about Grazia Verasani’s Quo Vadis, Baby? (Mondadori, 2007) I was researching an article for Literary Hub about works by Italian women authors that hadn’t made it into translation on this side of the Atlantic. I can happily say the book has now been translated, and American readers can meet one of the most unlikely female protagonists coming out of Italian fiction, mystery or otherwise.

Her name is Giorgia Cantini, a private investigator who doesn’t care what anyone thinks of her. Moreover, she’s unmarried, unkempt, and unusual. Indeed, one of the most arresting parts of Quo Vadis, Baby?—and the later books in the Giorgia Cantini series, so far untranslated—is the narrator. Specifically, the extent to which she is atypical for an Italian novel—and atypical for any kind of female in the spotlight in Italy. It is to Verasani’s credit that she takes Giorgia, someone she depicts as physically unattractive (a death sentence in many ways for women in Italy), and makes her into someone who is psychologically attractive (as all truly sexy characters are).

Case in point, early in the novel, Giorgia’s eye becomes inflamed—a situation she fails to attend to, instead making it worse, like some schoolboy. Verasani writes, “If I were someone who puts on makeup, I’d try to camouflage the difference between one eye and the other. I place the lit cigarette on the edge of the sink, wash my face, pick up the cigarette again, blink my eyes and breath in.” Translation: She is not someone who cares about appearances. She is someone who drinks and smokes incessantly with a weariness that piques the reader’s attention. At one point she opines, “My god, I’m tired of being human, tired of it. I put out the cigarette under the faucet, rub some toothpaste on my teeth, then leave the house.” That one line alone tells us so much about this character.

Note, none of this is unusual for a P.I., but, again, it is unusual for the stereotype of Italian women we normally find in any kind of fiction, from books to TV to movies. (From personal experience, I can say that Italians can pick out a foreign woman on the street simply if her hair is still wet from the shower and devoid of any kind of styling).

Giorgia eschews many other traditionally female roles. She spends her nights haunting jazz clubs around Bologna until the wee hours. And in scene where she is having lunch with a client named Lucia Tolomelli, she orders a coffee and a Campari, and when asked if she has children, she not only replies “no” but adds, “fortunately.”

Like all good murder-mysteries, there is a plot and there is a backstory. And the backstory is engrossing: Giorgia’s sister decamped to Rome to pursue an acting career and wound up dead—from suicide. That was more than a decade ago and it’s never been clear what happened. As she goes about spying on unfaithful spouses for clients, Giorgia’s thoughts are never far from her sister’s tragic fate. Notably, Verasani intersperses letters from Ada into the narrative. Giorgia says, “I’ve transcribed a few sentences from the letter onto a note pad, and I read them now at traffic lights. The last year of my sister’s life is all there in those scattered pages.”

I see this, and I think, “Go on.” In fact, the efforts by the translators, Taylor Corse and Juliann Vitullo (both Arizona State University professors), to make this a smooth read pay off more often than not. It’s worth noting that Vitullo is a professor of Italian while Corse is a professor of English. Good translations, after all, depend on good writing (in the final language, in this case, English).

Letters can often be a successful narrative trope; here they work particularly well because they are letters from someone who has died. Someone whose death has yet to be explained, much less fully grieved (if that state exists). Interwoven into the plot about Ada and the letters is the mysterious identity of someone who might have seen Ada shortly before she committed suicide. Who is this person, known in Ada’s letters only as “A.”?

One would not want to insert too many spoilers into this review, but Ada’s is not the only suicide in the book, and the relationship between these two suicides, and the repercussions of both make for interesting reading.

Verasani has a way with sketching characters. While Giorgia is the star of the book (and the series), her father, who runs the agency with her, is also winning. He’s your typical curmudgeon but he’s not a stock character. Pointing to the computers that are now on the desks of agency employees, he says, “Is that box really necessary?” Lovable, but not without his peccadilloes, including a small alcohol problem (perhaps not surprising, given the grief he feels over the premature death of his daughter). After watching him quietly fumble around the office at one point, Giorgia points to the third drawer of his desk and says to him, “The bottle you’re looking for is there,” before walking out the door of the agency without another word.

Quo Vadis, Baby? is a fun read. But it also represents something else. The Italian prose that currently gets translated into English is overwhelming written by male writers (see Three Percent’s database, now hosted at Publisher’s Weekly; of the 35 Italian books listed in the database as published this year, only 5 were written by women authors).

Three of those books are mysteries by Andrea Camilleri, a beloved and veteran mystery writer, and he’s among several Italian male authors that perennially appear in the database of translated works. Here instead we have a mystery by a woman writer—a bit of a rarity. Verasani may not have Camilleri’s profile in Italy—few writers do—but she is quite accomplished. As the book’s publisher, Italica Press, notes, Quo Vadis, Baby? is a cult classic in Italy, and not only spawned five sequels but also a film adaptation by famed director Gabriele Salvatores.

Verasani’s prose—and the capable translation by Corse and Vitullo—is very accessible. In that sense, it may be less high-brow than other literary translations that make it to America (Camilleri’s books notwithstanding). This is a mystery novel, after all, for a general audience. But one that will appeal to American readers who enjoy, say, Donna Leon’s books.

For its part, Italica has built a solid reputation among indie presses, and is particularly noted for translations of medieval Italian classics, including works by Boccaccio and Guido Cavalcanti. The press has also brought English readers a fine selection of works by Italian women authors who may not be well-known outside of Italy, including an anthology that features Elena Ferrante and the next generation of female authors. Now, Verasani has taken her place among them.

Last but not least, who wouldn’t want to read a book called Quo Vadis, Baby? The original title (in Latin!, meaning “Where are you marching?”) was so cool, the translators didn’t even need to translate it.

One response to ““Quo Vadis, Baby?” by Grazia Verasani”