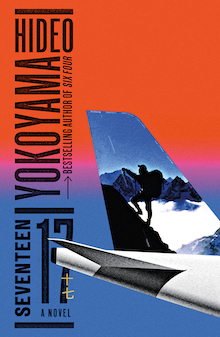 Seventeen is a thrilling mixture of truth and fiction by Hideo Yokoyama, acclaimed author of Six Four (which has also been translated into English). Seventeen realistically portrays the turmoil engendered on both a personal and a professional level by the very real 1985 crash of Japan Airlines Flight 123, which is still the deadliest single-aircraft disaster in history. The book opens in 2003 with Kazumasa Yuuki embarking on a climb up the Tsuitate rock face of Mount Tanigawa—often referred to as the “Mountain of Death.” As he makes the ascent, he recalls the day of the crash seventeen years ago and the week following as he worked as a reporter for the North Kanto Times, responsible for covering the tragedy. Through flashbacks, he vividly describes the events of each day and the emotions triggered within him, especially as they related to decisions about what to print about the crash.

Yuuki’s insights offer an unusual perspective on tragedy, as grief for the lives lost contends with the excitement of such a momentous scoop. Beyond his internal ethics, the broader impact of the event on the newsroom reveals the convoluted, and somewhat corrupt, power machinations within the NKT. Added to the balance are young reporters who are filled with their own self-importance, unwilling to accept that they might be wrong. Hanazawa, one of the first reporters to climb to the scene of the crash, is furious with Yuuki for passing over his article in favor of one from another reporter:

“Wajima’s account is fake. What I described—that’s the true accident scene. The corpses, the entrails, shouldn’t we write about everything? Isn’t it a newspaper’s mission to make sure this never happens again? If we don’t paint a true picture of the full fucking misery, then what’s the point? If you say you won’t publish my article, I’ll take it somewhere else. I can’t do this anymore. It was horrendous. There were corpses everywhere. Literally as far as the eye could see. There was not one decent, normal thing about it. Scattered all over—”

His voice was cut off by Yuuki’s hands around his throat. Yuuki pushed until Hanazawa’s head touched the wall behind him. Even then the man was still trying to speak.

“Just remember this,” Yuuki said through clenched teeth. “Those five hundred and twenty people didn’t lose their lives for you to get off on it.”

Yokoyama himself was a reporter who covered the JAL123 crash, which lends an undeniable authenticity to his writing. He uses Yuuki’s fictitious perspective to remove himself from his memories and reexamine everything that happened. Unlike Yuuki, Yokoyama climbed to the crash site immediately after the disaster and, because the trek was so long and arduous, he had to “spend the night on the mountain, surrounded by body parts that no longer resembled anything human.” Yokoyama wrote this novel in part to “escape” his memories of the crash, seventeen years afterward—like Yuuki, who is reliving his experience seventeen years later.

Kawai’s translation brought the emotions and concepts behind Yokoyama’s words into English without any residual awkwardness. Even without familiarity with Japanese culture, readers can pick up on certain cultural details, like the respect for age and social status, which is made apparent in the translation as well. At one point, Yuuki receives a reliable tip about the cause of the crash, but decides not to print it before receiving confirmation, which leads to another paper beating the NKT to the scoop. Despite derision from most of the office, a fellow (but younger) reporter calls Yuuki to tell him he made the right decision and refers to him as “Yuu-san” instead of the normal “Yuuki-san.” The difference seems slight until Yuuki, thinking back to the phone call, draws attention to it regrets not thanking him for using the appellation, making clear the close bond of respect and friendship implied by the nickname.

Yuuki’s recollections of that week in 1985 are interwoven with chapters detailing his progress up Tsuitate, providing a break from the fast-paced action in the newsroom. As he climbs up with Rintaro Anzai, the son of his colleague Kyoichiro Anzai, information about present circumstances invites many questions about the past—why did Kyoichiro collapse and go into a coma on the same night as the crash? In what capacity is Yuuki now working for the NKT, and why did it change? How did he end up acting as Rintaro’s second father? The evolving mysteries set the book within a broader framework, beyond just the week of the disaster. Tidbits of information provide a welcome distraction from news of the flight.

The author’s candor in describing Yuuki’s reasoning makes him quite relatable. Some of his choices are incredibly frustrating because he considers better options but is too cowardly to see them through. Power machinations within the NKT clearly have a huge impact on what gets printed, and from his position Yuuki can see everyone’s political alignments. Trying not to pick a side, as we all know, only gets him so far. His moral compass seems to be relatively well aligned, but he often lacks the nerve and willpower to fight for what he believes to be right. Eventually he gains both confidence and courage and begins to make more controversial decisions—risking the wrath of his superiors and forcing him to decide between his integrity and his job.