In support of Antoine Volodine as our featured “Author of the Month,” throughout the day we’ll be posting excerpts from the three books of his Open Letter has already published. (Next week we’ll run excerpts from forthcoming ones . . . )

First up is Post-Exoticism in Ten Lessons, Lesson Eleven, translated from the French by J.T. Mahany.

Remember, if you use the code VOLODINE at checkout, you can get 30% off of all Volodine books. (Offer valid until midnight 1/31/2019.) 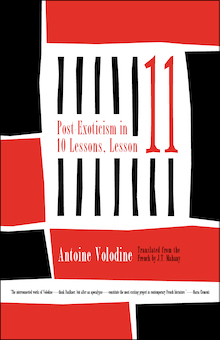