“Gustave and Maxime in Egypt (Or: The Metaphysics of Happening)” by Zsófia Bán

up with everything that doesn’t happen.”

Gustave is now twenty-eight years of age, as is Maxime. Maxime is two months younger than Gustave. Gustave will be fifty-nine when he dies, Maxime seventy-two. At this point (à ce temps-là) neither suspects this. Gustave and Maxime are traveling to Egypt, suspecting not a thing. Gustave is 183 cm tall, gray-green eyes, attractive, and cuts a fine figure indeed. He has a beard and mustache. He claims to be of Iroquois extraction, which makes him immediately sympatico in the eyes of many. Here is what Maxime relates about Gustave forty years later.

“He was an exceptionally beautiful boy . . . the white skin of his cheeks danced with rose-pink, and with his shock of hair, his striking mien, broad shoulders, thick golden beard, large sea-green eyes shadowed by deep black lashes, his resonant trumpet of a voice, exuberant gestures, and swelling laughter made of him the image of a young Gallic general in arms against the Roman legions.”

Maxime is an industrious and nimble boy. He takes more than 25,000 calotypes on this trip. This is what Maxime looked like before their departure: 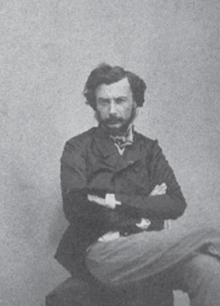 As for Gustave, we don’t know what he looked like before their departure.

Maxime wears a Renaissance ring with a cameo of a satyr. He had given this to Gustave five years before their voyage. In return, Gustave gives Maxime a signet ring on which he had Maxime’s initials engraved and a slogan whose text is unknown to us. It was a sort of intellectual proposal of marriage, Maxime would later write.

Gustave writes diligently, keeping to a schedule. Eight months before their voyage, on the night of February 13-14, he writes the following in his notebook:

“One can do so very much in a single evening. After dinner, I conversed with my mother, then dreamt of travels and possible lives. I wrote almost one whole chorus of St. Anthony (the dog-headed-monkeys part), read the entire first volume of Memoirs from Beyond the Grave, then smoked three pipes, and now, take a pill. After that, a shit. And sleep is still far off!”

Gustave muses incessantly about the Grand Voyage. Alas, there is no chance his mother would allow him on such a perilous undertaking to the ends of the earth. One example why: In September of 1846, Gustave’s mother stands white as a sheet on the platform of the train station where the 25-year-old Gustave returns, one day later than promised. Gustave then renounces all further nights that were to have been spent with his beloved, Louise Colet. My mother needs me, explains Gustave to Louise. “As we know,” explains crackerjack Flaubert scholar Jean-Pierre, “this unusual situation gave rise to one of the most sublime epistolary correspondences in French literature.” Merci, Madame Flaubert, merci à vous! Alternately: Thank you, dear Louise, for you have the patience of an angel.

Jean-Pierre delivers his lectures in a stunning sky-blue jacket over a wispy, pale-pink shirt. Le jour de gloire est arrivé! I would softly add, in admiration, just for the sake of objectivity. Objectivity is the main thing in scholarship. Objectively speaking, there are two sorts of people: the ones who know they are prudes, and the ones who don’t know they are prudes. Jean-Pierre, for example, doesn’t know. But still, he is. This is what makes scholarship so wonderful. Jean-Pierre loves three things: 1) Himself, 2) Flaubert, and 3) Women. In that order. Jean-Pierre also likes men, but that is not on this list.

On the last day of April 1849, the widow Mrs. Flaubert (residing at 7 Rue des Beauxjours, Croisset) collapses under the weight of the reasoning of Maxime de Camp, Achille Flaubert, and Dr. Cloquet. Crack. Well if there’s nothing else for Gustave’s health, then fine, let him voyage to the East. If it must be, then let what must happen, happen. But did what had to happen really happen? And perchance is what happens more important than all that does not happen? [Qu’en pensez-vous?]

Before the voyage, Maxime resolves that he will (futur dans le passé!), in revolutionary fashion (technologie moderne) and “with utmost fidelity” document it through photographs. But the unexpected revelatory force of the images proves on occasion to shake him to his very core. At such times, he rips them up. (Exposure time: min. 2 mins.; destruction time: max. 1 min.)

After the voyage, Gustave resolves he will (f. dans le p.), in revolutionary fashion (style moderne) write in suitable language and “with utmost fidelity.” Still, there are certain words (le mot juste) that, on occasion, shake him, too, to his very core. When this occurs, he erases. (Exposure time: max. 2 nanoseconds.) After all, let the juste have its limits (subjonctif) too!

The deletions are clearly discernable in the manuscripts, to which Jean-Pierre, chic scholar of deletion, has devoted his career. Ah, to fiddle with the deletions of others, and poke about in the discovery of unhappened happenings! Que c’est bizarre, que c’est étrange! This is said to be the very pinnacle of repressive effect inasmuch as, chemin faisant, there is no time for the examination of self-deletions. Between deletions, Jean-Pierre likes to screw; he says this relaxes him. Je, as a student of French, offer assistance in pursuit of excellence. Jean-Pierre prefers it from behind (see also Huysmans’s A rebours), which helps the Flaubert go more smoothly the following day. I let him. After all, I love literature.

Gustave and Maxime set out in October of 1849. Maxime is jubilant. Gustave is swept on a tide of ecstasy (see also the widow Flaubert’s last words: “Are you trying to kill me, Gus?!”) For me, writes Gustave, friendship is like a camel. Once it gets going, nothing can stop it. Gustave is mistaken. There are some things that can (pronounced Cannes).

Travel is the greatest enemy of a friendship. Or perhaps not. But if it is, then it goes whole hog. Gustave is bored. Gustave is not the least interested in fulfillment. Maxime is astonished by this, yet remains displeased. Gustave, chuffs Maxime, is just like Honoré: he looks at nothing but remembers everything. But who wants to climb up to the guano-caked attic of fulfillment, thinks Gustave. Gustave is no devoté of unnecessary exertion. Gustave is phenomenally corpulent. Gustave is cantilevered to the top of the Great Pyramid by twelve Arab servants. At the peak of the Great Pyramid, gasping for air, they have a look around. The Pharaoh can just suck all my dicks, thinks Gustave. Le sport aide non seulement le développement physique, mais aussi la formation morale (Baron Pierre de Coubertin, Les jeux Olympiques). [Mémorisez!]

“. . . dear God, what is this constant exhaustion that weighs me down wherever I go! It even accompanies me on my trip! It has become one with me! Deianeira’s shirt did not cling to Hercules’ shoulders any more fiercely than this boredom to my life! The only difference is, it kills more slowly! It’s Monday. The Khamsin is blustering, the clouds are red . . .” [Traduisez!]

G: Remember the lemon ice we had at Tortini’s?

M: Indeed I would.

G: Oh, those lemon ices! The steam that envelops the cup like a white jelly.

M: Could we change the subject?

G: That would be nice, but lemon ice is clearly worthy of having its praises sung. Take a spoonful and there it towers like a little cathedral; gently spread it between tongue and palate. As it slowly melts, it exudes a fresh, magnificent savor, bathing the uvula, gently stroking the tonsils, sliding down the esophagus (to the latter’s boundless delight), and then it reaches the stomach, which veritably cackles in glee. Just between us, a lemon ice is just what the Kusheir Desert needs!

Maxime kills Gustave. World literature mourns. At this point, Gustave hasn’t even written Madame Bovary. All right then, sighs Maxime. I’ll spare him. I can use this one later (which he did). He rewrites the end of the scene, like this:

G: My dear Max, thank you ever so much for not shooting me in the head. I’d have done it if I were you.

M: Gustave, this could be the beginning of a beautiful friendship.

Gustave and Maxime go whoring. Gustave still has some of that fine sausage from home, as well as a case of morbus gallicus. Non, je ne regrette rien! Secretly, Maxime is fascinated by him, and jealous.

“I go off with that dissolute Safia-Zugera, a rakish little tigress. I sully the settee.” Gustave has an obsessional neurosis. He cannot stand disorder.

“During my second round with Kücsük, when I kissed her on the shoulder and felt her round choker under my teeth, her pussy like a stained velvet pillow, I was a wild animal.”

Here the student of French will respond: “Jean-Pierre, mon cher, that phrase, ‘stained velvet pillow’—would you call it adjectival or verbal?” [Qu’en pensez-vous?]

Louise Colet’s reaction: “Gustave, you bastard, go get fucked!” (Which he did.)

Hassan el-Bilbezi: a dancer dressed as a woman. “His belly and hips gyrate hypnotically—the belly veritably undulates—and during the grand finale, his pantaloons inflate and open.” [Deleted]

Gustave and Maxime look at each other with some surprise. As if Gustave were seeing Maxime for the very first time. “. . . What is his name, where could he be living, what about his life, or his past? He would have liked to explore the furnishings in Maxime’s room, every last article of his clothing, the people he sees. The desire for physical possession disappeared behind a deeper curiosity, an excruciating curiosity that knew no bounds.” [Gustave deletes this remark, and uses it elsewhere. Jean-Pierre mentions nothing of this.] Gustave has a thought: travel is a sentimental education. This pleases him and he writes it down.

Gustave and Maxime draw their voyage to a close. They smoke a water pipe in a Greek café. Later, Gustave writes about it all, surprisingly, elsewhere. [Jean-Pierre is silent on this.]:

“He took a trip. He came to know, one after the other, the melancholy of great ships, the shiver of awakening in a desert tent, the sweet lulling intoxication of those landscapes and ruins, and the strange bitterness of shattered temptation.”

And then: “A miserable attack of nerves about three in the afternoon.” [Jean-Pierre at last reports, in a footnote: “It is quite difficult to make out these words, overwritten in a light blue ink; the deletions only serve to render the text unreadable. This is not the result of the author’s corrections but rather the bowdlerizations of Caroline Franklin-Grout.” Caroline is Gustave’s niece. She manages Gustave’s papers. Caroline is an impossible prude. “The text, then, is unreadable,” continues a triumphant Jean-Pierre, “but the word ‘nerves’ glows faintly through the ink. It appears that the word ‘seizure’ follows it.”

The word “nerves” glows faintly through the ink.