It’s almost time for the next season of the Two Month Review—our seventh season. (That’s a solid number.) This season we’re returning to do an Open Letter title, Antoine Volodine’s Radiant Terminus, translated from the French by Jeffrey Zuckerman. 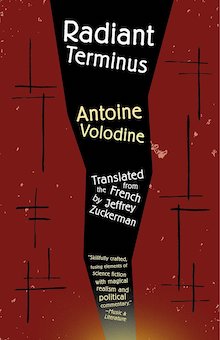 The most patently sci-fi work of Antoine Volodine’s to be translated into English, Radiant Terminus takes place in a Tarkovskian landscape after the fall of the Second Soviet Union. Most of humanity has been destroyed thanks to a number of nuclear meltdowns, but a few communes remain, including one run by Solovyei, a psychotic father with the ability to invade people’s dreams—including those of his daughters—and torment them for thousands of years.

When a group of damaged individuals seek safety from this nuclear winter in Solovyei’s commune, a plot develops to overthrow him, end his reign of mental abuse, and restore humanity.

For those of you who like to read along with these seasons—not entirely necessary! although I promise the jokes are funnier and the insights more insightful if you do—here’s the official reading schedule. I’m listing the podcast release dates below, but you should follow our YouTube channel (or Twitter) to find out about the live YouTube recordings, where you can ask questions, point out your own observations, correct things we got wrong, etc.

(Note: Most YouTube recordings are Wednesday morning, but this depends on the availability of our guests, and is subject to change.)

(One other note: We have almost a full slate of guests already lined up, including some old favorites and some really cool newcomers. I don’t want to list them now in case anything goes wrong, but this should be a star-studded season.)

So tune in next week for a general introduction to post-exoticism, Volodine’s pseudonyms, and much more. And then we’ll be back on 1/31 to talk about the opening sections of the book.

Also, in case you haven’t already bought a copy from your local indie bookstore, you can use the code VOLODINE at checkout our site, and receive 30% Radiant Terminus or any other Volodine title.